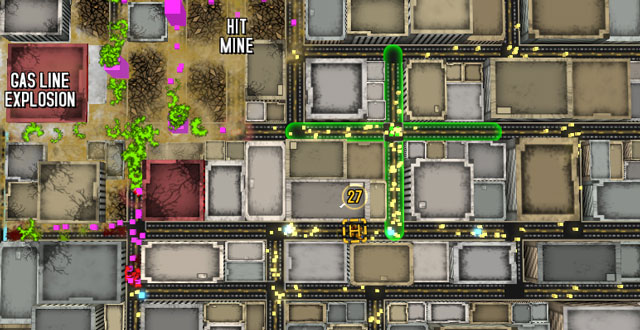 I’m presented with a satellite view of city blocks, made up of buildings and right angles. Yellow dots, civilians, populate the concrete sprawl. Arrows with skulls point to trouble. At this point in Atom Zombie Smasher, I only have the evac helicopter to ferry away the civilians. Little purple dots, zombies, start to pour into the city. I pick a spot as far from those initial hordes as possible.

There is little strategy in this first round. It’s just a lesson. The zombies chase down civilians, turning them against their fellow humans. The helicopter periodically picks people up, but is never quite fast enough. The zombies soon choke the streets, sending the yellow dots into frenzied panic. If I make it long enough, day turns into night, and purple dots start to migrate into the city in droves. Soon the entire map is theirs: an ironic perversion on Conway’s Game of Life.

Most games don’t expand; they unfold. They wrap themselves around a single idea and play variations on a theme. Half-Life throws different set pieces and scenarios at the player, but at the heart of it all is shooting. In SimCity, property taxes and crime rates spiral out of the theme of building.

Atom Zombie Smasher doesn’t unfold when played. It expands. It is kitchen-sink design, all elements and additions. It should collapse under the weight of its ideas, but defiantly stands tall.

The metagame is played on a map of Nuevo Aires, where larger, more strategic, but slightly less engaging, decisions are made. The randomly generated cities are where the real game is played, with units ranging from barricades to rooftop snipers. Atom Zombie Smasher works because of the friction between these elements—the units, maps, strategic overview, and various map conditions that are in effect for a turn.

This turn can be played a variety of ways: Do you use your dynamite to clear a path for civilians to the evac zone, or to kill zombies? Do you use your bait to lure the zombies to a trap, or away from civilians? Now how does that play with the fact that the zombies on this map are faster? If the game had randomly given you mobile foot soldiers and artillery guns, you’d be playing a tense tactical shooter. Exacting control of your units would become a priority. You would bring the fight to the zombies.

After every round, points are tallied for you and the zombies, based on the number of territories controlled, zombies killed, and humans saved. Certain thresholds unlock even more elements: Saving scientists adds a new research element to the mid-game, while superweapons become available near the end to fight against the then-whelming zombies. More ideas to complicate things.

The game’s elasticity is what makes Atom Zombie Smasher enjoyable, especially when you find a way of using units that’s novel. The elasticity also damns it, occasionally. Sometimes you will be given a bad lineup of units that, if compounded by a map that isn’t in your favor, can make the game impossible to win. And if you are trailing in points by a significant margin, the fun dissolves. A comeback is hard to pull off, even with the best tools.

But Atom Zombie Smasher remains illuminating in these no-win situations. The game seems to be pulled in different directions. What becomes clear, through playing, is the degree to which its parts are actually connected. The hodgepodge coalesces into something dangerous close to a good game.