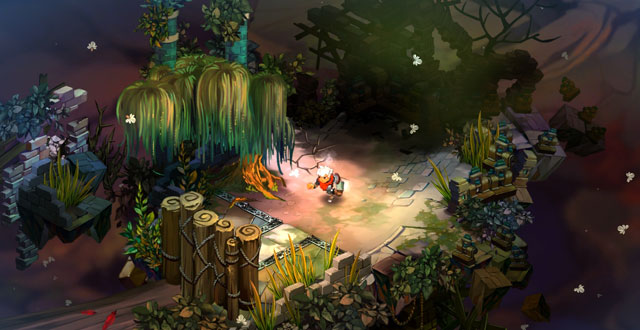 Ever tried to dance from side to side
While holding your breath?
While choking on swamp weed?
While peckers trying to prick you in the eye?
Well, let me tell you. It ain’t fun.
— Bastion

It is a rare feeling to quote a game without feeling as though one is citing the appendix of a technical manual. Reprint words from La Jetée and you have unraveled the text from the very fabric of the film, even though the words are merely subtitles superimposed on still images. But the written word in a game usually appears just as it is: a component that has been painstakingly affixed with nuts and bolts to the other moving pieces of the game, the people and the places and the code. The gun is the part that you are given to shoot, and the word is the part that they are given to speak.

Not so in Bastion, a game that is woven around the word that is woven around the game to such an extent that the word no longer floats like sea scum upon the surface of the game, but dissolves beneath and becomes one with its material. This is partly because the sandpaper voice that speaks to you for the game’s duration, telling you the history of the world while narrating your present actions, is omnipresent—emerging from the full width of the screen rather than from the flickering mouth of a single character.

In fact, the few characters left in Bastion’s ruined world are mute, appearing infinitely far away. They are one-inch figurines buried in the ornate and exotic landscape of emerald foliage and shimmering blue crystals, ashen cobblestones, lavender bricks and fading embers, looking petrified among such exquisite remains. They won’t offer comment on what you see and do in the game, standing quietly by as you steal, demolish, activate, and kill. But their expressions are permanently drawn, doll-like, with determination and despair. They are purely visual characters, reminding us that videogames thrive on appearances. You can speak to them, but it is the voice that speaks back. The voice articulates their tragedies like a campfire ghost.

What is represented here is not quite literal, despite first impressions. At face value, Bastion tells a straightforward fable that deals respectably with themes of apocalypse, accountability, revenge, rebirth, and homecoming. You play as the Kid, a bruised figure with the top-heavy proportions of a baby but the gray hair of a sage. He’s sent flying to various sites around the Bastion, a floating fortress that he must slowly rebuild with parts retrieved from the ruins. And so you do that, by operating an action game so finely tuned it runs like a Swiss watch, while the voice runs a play-by-play commentary.

According to the voice, this Kid is a person with a history, a psychology, and an identity. At climactic moments throughout the game, the voice states what the Kid is thinking, how the Kid is feeling, and why the Kid is doing what he does. Its understanding of the Kid, however, seems to have yellowed and frayed with the unspecified chasms of time between when it is speaking and when you are playing. It feels like a distant murmur, clouded by the vagaries of memory. The voice’s insight into what drives the Kid is far less acute than your own whims, which take him down one path and not another, and send him on spontaneous destructive rampages.

Indeed, the Kid’s motions echo your feelings about the game, and seeing them binds you to the Kid in an instant. When you move, he swings his enormous arms with single-minded purpose. When you pause, he glances constantly over his right shoulder, fearful of the next event. It is notable that the narrator lags, if somehow imperceptibly, behind the firing of your own synapses. “Kid just raged for a while,” the voice says, right after the fact. Lovely but treacherous, Bastion appeals to your instincts as the voice makes artful sense of them.

If a nine-minute quest in Bastion feels like an eternity, it’s because you have been making hundreds of minute decisions to bring the Kid to his goal. The game is filleted with the micro-rhythms of traversal and combat: swinging a sword, dodging to the side, placing a mine, countering on a hair, aiming for a weak spot, stepping back, releasing a bowstring, sipping a potion. Your concerns multiply exponentially when, wishing for more experience points, you raise the stakes at a Shrine, causing beasts to drop bombs when they die, evaporate randomly into wisps that cannot be hit, or become harmful to the touch. The continual exchange between perceived dangers and your reflexes quickens to the point that it is your working consciousness that appears to form the sentences and carry forth the story.

Likewise, and most strikingly of all, the tiles of the ground literally come together as you press forward, so that you are assembling the world inches from the Kid’s feet as you play. The Kid’s greatest fear may be that when he rounds the next corner, he will simply step out into the void.

How do you give a game a voice? You give it a voice.

Yet this is ultimately a great freedom—to be allowed to walk off the end of the world, instead of being trapped in a stone maze. The residing impression is that of a higher order: the Kid falls to the ground below and comes flying back through the top of the screen, as though the world were shaped like a halo. Falling hurts him a little, but you subsequently experience the game world as an infinite embrace, as it should be; not a purgatory, as it so often is.

It’s no coincidence that the writer of Bastion is concerned with resilience in the face of death. The Kid encounters bodies of city dwellers long turned to ash like the citizens of Pompeii; he can walk past them or shatter them without so much as a shrug, having more important things to do than to dwell on the past. The voice has something to say about the bodies, but not much; it considers them in the same tone with which it other times remarks on a bridge or a garden. They are all structures that mean something for a while and then disintegrate. The flipside of such an elegiac worldview is that every tree, tower, and tile in the game could have its own story.

Bastion itself wishes to persist, as a living artwork that may be revisited forever. So it makes a bold maneuver so ingeniously simple that it reads like a punch line. How do you give a game a voice? You give it a voice. The Kid allows you to embody that voice—or its memory, or its imagination—whose awareness of the world intermingles vine-like with your own.

“Been meaning to install some guardrails,” it says after the Kid takes a bad step off the Bastion. It’s a cheap laugh at your expense, but also a demonstration of overwhelming generosity from the authors. For the voice breathes life into a medium in want of it, enriching your every move within the game, elevating it from a series of mental distractions, never content to let you infer the significance of its iconography. A raging enemy is an abusive foreman; a floating platform is a walkway for lovers. A pecker assault in a tangle of swamp weed forms a poem. The voice micromanages your reactions to your own actions: switch weapons and you are favorably compared to a hunter, or else deemed a pyromaniac. No gesture is left unturned. To a bystander, the voice may sound overbearing, until one realizes what it brings to the picture.

The voice of Bastion has obvious precedent in the cinema, but is realized here as a basic material as integral to the game as its soundtrack and its rules. I would suggest that, in embedding such a voice, Supergiant has resolved a certain spiritual malaise found in unthinking lines of code. Driven by instructions that branch and repeat endlessly, machines make uncanny playmates. Perhaps this is only because we have thought that they could speak for themselves.

The game culminates in a pair of decisions that will paralyze you with apparent consequence. They testify to the illusion of genuine agency that has been erected, sentence by sentence, over several hours. I thought over my choice for a long time, as if the wrong move would erase the game from my Xbox 360.

“You know what’s funny about all this?” the voice asks toward the end. Its answer is best left to the moment, but amounts to this: “We want to sound important while we play.”