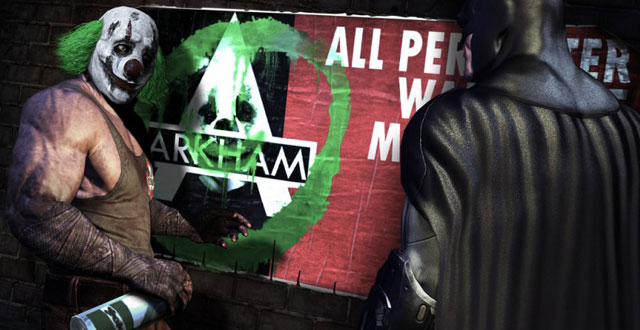 It’s snowing in Gotham City right now. When did that happen? Was it while I was scouring the subways? Has it been snowing this entire time?

Right now the game says I’m supposed to head over to the steel mill, past the interlocking network of snipers with uncannily sharp aim. Two-thirds into Batman: Arkham City, this is a pretty clear formula. Go to a waypoint, enter a building, fight my way through a bunch of goons. This culminates in a boss battle.

But Gotham is snowing and I don’t know how long that’ll last. I take to the rooftops. I’ve tried to avoid fighting any of the goons on the ground: Arkham City is a chunk of Gotham City that has been converted to a prison, so they’re all prisoners, and beating them up just seems sadistic. There’s tough on crime and there’s walking into a jail cell with a bar of soap in a sock.

Plus, I’ve done it before. I’ve beaten up gangs of these guys on the streets and in the buildings and there are certain to be more guys to come. The thrill of the game isn’t the relentless torrent of combat, but the feeling of coming out unscathed when you were outgunned and outmanned. It’s different to pick on goons just for the thrill of a quick fight.

The problem is, these henchmen are my only company in the expanse of Arkham City. Where is the brooding Gothic quality that dripped from its predecessor Arkham Asylum? The sequel is more of the same: more area, more abilities, more villains, more everything. More, more, more. But there’s a muddled sense of purpose that Arkham City can’t shake. The story rarely embraces the open world it takes place in, which is mostly connective tissue between two points, and only shows promise when it goes off its formula.

But going off its formula also means that Batman has to stop being Batman. He can’t be the driven, obsessed crime fighter. The roof I’m standing on has a Riddler trophy locked in a dome. The city is littered with these: they stand as totems to obsessive-compulsive behaviour, almost daring me to grab them. I ignore the trophy and grapple over to Ace Chemicals (art deco, with Schumacher colors). As I’m reeled in, I spot another three Riddler trophies, but just as quickly forget about them.

As I glide, weaving between building, grappling to gain speed, Arkham City opens up in a new way: the way it’s meant to be seen.

There is a deep crack and boom, like God’s shotgun going off. Oracle tells me that there is probably another Deadshot victim in this two-block radius. This isn’t part of the main storyline. It’s one of the too-few side missions. These are outside the game’s rinse-repeat routine. They feel fresh. Does Batman get bored? Does he ever get tired of being so unrelenting? I wonder if Batman, the character we know as Batman, would ever take a stroll to enjoy the snow. No, probably not. He’d have finished the steel mill by now.

I find the body, eventually, on a chewed-up slab of freeway. A phone rings. I reluctantly decide to leave the body and grapple into another series of alleys. To avoid the dramatic reenactments of The Warriors put on by the goons, I rarely get a chance to take a walking tour of Gotham. I find a row of pay phones next to a chain-link fence. I take the call.

It’s Zsasz. A second-rate villain I can’t stand. He has two hostages and they’ll be murdered if I don’t answer another phone in time. He hangs up. I’m numb for a second, trying to figure out where to go, and the trajectories I have to take.

As I glide, weaving between building, grappling to gain speed, Arkham City opens up in a new way: the way it’s meant to be seen. It’s a deceptively small chunk of city, and definitely smaller than, say, Liberty City. But so much attention has been lavished on the rooftops of these tenements. This is almost a completely different city from the air; in truth, it’s almost a whole new landscape. The excess of a rooftop pool contrasted against the unadorned water tower a few buildings over: Why is it that, aside from these side missions, the city and such contradictions aren’t given more time to shine? If Rocksteady’s first game was all about Batman, and the ways he’s both a badass and psychologically broken, why couldn’t Gotham City be the star of this one? In Arkham Asylum I felt driven to the next point by the claustrophobic island; here I can’t be bothered to stick to one case at a time.

I reach the phone; the hostages are safe, and I try to trace the call, managing to get a little closer to finding out Zsasz’s location.

I remember that I still need to go to the steel mill, but I don’t bother.