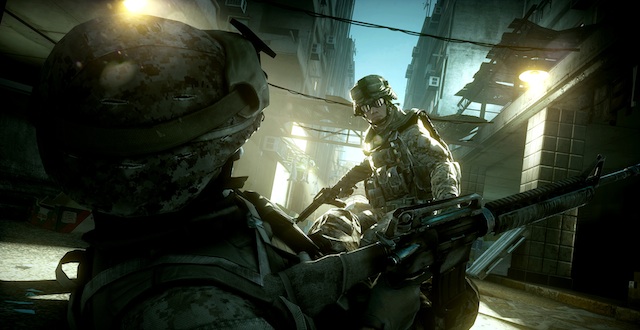 Let’s get this out of the way: Military-themed first-person shooters aren’t about depicting actual war. It is impossible to adequately recreate the horror of watching your friends die, or the intense fear of feeling as if you could die at any moment. Further, the developers of Battlefield, Call of Duty, and Medal of Honor have no interest in providing their audience with a long, hard look at the reality of their particular muse.

When you’re shot, you keep running. When you’re dead, you respawn. When fellow soldiers die, you don’t mourn. When an enemy appears, you feel a jolt of excitement instead of a chilling sense of dread. You pull the trigger without hesitation. When you return to the real world, you’re not dealing with nightmares, flashbacks, and the need to avoid certain places and noises that act as triggers. These games are just games.

It’s an odd sort of genre that purports to be “realistic” in some ways, but bends over backwards to avoid being seen as too realistic: ridding the player of the need to follow rules of engagement, making the conflict simple and unambiguous. These games play like the kind of war one might fight in a perfected version of our world—civilians are gloriously absent, both armies have plenty of supplies and ammunition, and fear of death is alleviated because death has lost its eternal quality. Two armies fight in the desert of Eden, all in the name of good, clean fun.

In Battlefield 3‘s multiplayer experience, enemies are purely opponents. How you frame the battle is your own prerogative. Here’s an opportunity to experience the beneficial aspects of battle, heretofore overlooked in the shadow of mayhem, politics, and jingoism.

Unlike Call of Duty, the Battlefield series embraces this concept rather than retreating into something that resembles paintball or freeze tag more than modern warfare. It expands the play space into something resembling an actual battlefield, often stretching on for what seems like miles in the cat-and-mouse-style Rush mode. The attackers push against the defenders until all seems lost and the defenders retreat.

A glance back at that dead soldier and his act seems almost pointless.

Each soldier has an acute sense of his own smallness. He snipes a lone soldier, looks up into the distant sky to see two jets dogfighting, and turns to his right to watch his team’s helicopter destroy an entire bunker. A glance back at that dead soldier and his act seems almost pointless. These moments are essential to giving the game a sense of actual satisfaction; moments of in-game heroism are few, but they come with real stakes and real successes.

For instance, each member of a squad of four can spawn either in predetermined and resolutely impractical locations—or you can spawn on your squadmates, who are often right where you’re needed most. The catch is that your squadmates must be alive. When all three of your squadmates are killed, a miracle takes place: your own life is given significant consequence. This moment inspires you not to run and gun, but to pursue self-preservation. Hide in the right corner waiting for backup to finally arrive, and you may very well be the reason your lowly squad of four protected your base from the attacker just long enough to win the game. Become too brave in that crucial moment, and your squadmates will have died in vain. As you and your team run desperately through a valley in a desperate attempt to reclaim lost land, the game ends in an anticlimactic sigh.

Battlefield 3 takes a kitchen-sink approach to recreating the wartime experience, including all sorts of gadgets, vehicles, locations, and weapons. As a result, each individual’s goals can be extremely varied: supporting your frontline with ammo and suppressive fire, scoping out the enemy territory and pointing out the locations of enemy soldiers and vehicles, repairing your own vehicles, and healing and reviving enemies. Battlefield 3 doesn’t force or even guide you into any one role; but it makes experimentation easy. Every death is also an opportunity to revise your role and tweak your loadouts accordingly. Because matches are so long, there’s no sense that time spent planning and preparing is time spent giving up victory.

Two armies fight in the desert of Eden, all in the name of good, clean fun.

Trying to carry out these roles with a squad of strangers can often grow tiresome. Even though there is an attempt in Battlefield 3 to encourage teamwork by doling out points for all sorts of activities, it does little to stave off the desire to come out of a game looking like an action hero. No one on any squad seems content being the support guy, so most games with strangers turn into a race to the nearest bad guy, and then a blind shooting gallery once someone from the other team appears. It isn’t always this way, but it happens often enough to discourage you from playing without friends as much as you would otherwise.

But when joined by a squad of acquaintances, each focused on carrying out their particular role in the context of a wider objective, Battlefield 3 takes on a surrealist quality, transporting me into a warzone that feels very real but without real-life consequence. The prerecorded sounds of explosions and urgent screaming fade into the back of my mind—we discuss over headset what our next move will be, and are interrupted by one of our friends calling for help. We rush to his aid and take out three opposing soldiers who were trying to take our base. We scan the immediate area for any other opponents, back slowly into our respective corners, and breathe a collective sigh of relief. We wait in silence for the enemies to return, knowing that this time they will be ready for us. This opposing squad is currently devising its own counterattack.

We few, we happy few, we band of brothers;
For he to-day that sheds his blood with me
Shall be my brother

Battlefield 3 provides opportunity for a collegial happiness that is uncomplicated by political intrigue or psychological scars. Its constant bloodshed is less poignant than dying once and for all.

Is that so wrong?