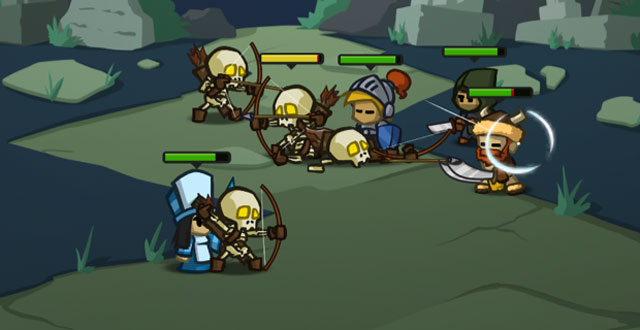 Lovely. I love watching Battleheart move. Because screenshots on Touch Arcade make the thing look like shovelware, but it’s lovely in motion. The knight pokes an orc with his stubby sword and the orc flops onto his back and blinks in and out of oblivion.

That blinking is a remembrance of the classic brawler, the Double Dragon and Final Fight of my youth, the games where I beat hundreds of men and women to a pulp with a lead pipe and their bodies blinked in and out of life. This retro accent is Battleheart‘s sharpest hook. The rest of it has been drawn in the short fat strokes of a Powerpuff Girl.

This is a Saturday morning cartoon about the blood and guts of medieval warfare. Battleheart scratches at the animal back of my mind, like a ball of yarn will inspire a kitten. I open the game and enter the tavern: a submenu behind a menu. I build a fellowship. I hire a knight who brandishes a sword, a wizard who makes fireballs, a barbarian who gets angry, and a cleric who keeps them alive. There are also a monk, a bard, and a pirate. I dress them up in little outfits and weapons and magic rings. I place them in forests and caves, where they fight roly-poly cyclopes and adorable bats. They make battle on my subway ride. I hear metal clanging on metal in my off-white iPod earphones. A man across the aisle is somewhat interested, but he is also spiritually exhausted at the sight. Aren’t they all? As the train stops and starts with a lurch, they can spot me tapping and scratching at my device with the conscience of a New York City cockroach.

Now, this still has promise, if your profession is videogames. Battleheart is a line-drawing game wearing the clothes of a role-playing game over the body of a beat-’em-up game. You play by pointing the party members around the battlefield, where they fight monsters and cast spells on themselves and monsters and each other. When a monster or hero dies, you draw new lines, rearrange your ranks. You wait and watch; then you repeat. This feels like, say, the tactics of a real-time strategy game meets the resource placement of a tower-defense game meets Angry Birds. Pretty clever. And lovely.

No. You admire the way they move, blinking and bashing holes in each other. But no. Actually this is tedious. This is a game about trends and technology. You see, Apple devices are all about the newness of the new. It is patently not enough that touching my game feels more intuitive than pressing a button that touches something in the game. Because Battleheart really wants me to understand how new that is. It’s so new that I have to touch my wizard to view his health at any time. Like I am tapping him on the shoulder to ask him how he’s feeling. Oh—he is about to die. It’s so new that I have to physically drag the warrior and the wizard apart in order to reach the cleric who is hidden behind them. They shuffle their feet. Now I can ask the cleric to heal the wizard. Except my finger misses the wizard by a few pixels, and the line has stuck to the warrior, you know, to make it easier for the cleric to heal him; and the wizard is dead. Now a bat is biting the cleric in the face.

What about shortcuts? Touch a floating cleric icon to signal the cleric? Read a floating health readout to read his status? That would have been crude? Try this instead. This is a new way. The new way is that nothing is on the screen. Apple!

Apparently in the new age, game characters are no longer abstractions of human life. Now they are actual humans that we can reach out and touch. Apparently this is what we want. But human relationships are complicated. Consider this. When you play games, do you want to be understood? Or do you want to spend your life untangling them, and their conflicting motivations, like your double-knotted shoelaces?