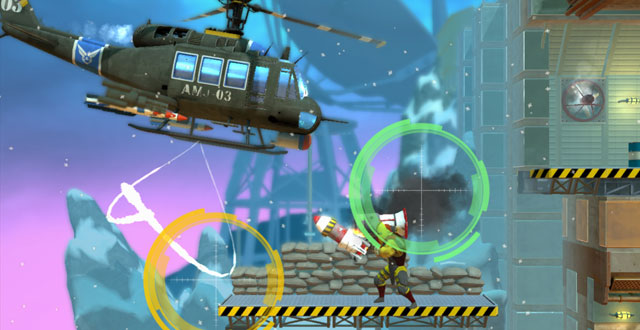 As a child, whenever a restaurant would offer me chopsticks I couldn’t help but accept. It didn’t matter that I was rubbish with them; I’d take it as a personal challenge, transforming any meal into a meta-game. By neutering the 2D platformer of its jumping, Bionic Commando Rearmed captured that feeling. Impeding movement made the game a constant, albeit rewarding struggle. Bionic Commando Rearmed 2, however, adds what its predecessors took away, making it feel more akin to using a fork. Where’s the fun in that?

I was confounded by Bionic Commando Rearmed‘s subversion of 2D platformers—a genre I’d played for two decades, starting with Super Mario Bros. “Why can’t Spencer hop over a crate?” I wondered. “Why can’t he shoot upward? Why can’t he change his trajectory when falling?” The game probably would’ve been easier had I played its source material, Bionic Commando (NES, 1988).

But eventually the mechanics clicked, and I realized Spencer’s limited moves transformed even the most basic act of traversal into a reflex-based spatial puzzle. I grew to understand Spencer’s possible routes, and it became a matter of positioning him precisely where I needed him.

Bionic Commando Rearmed 2 is like smashing open a Rubik’s cube. New Spencer (hereon referred to as “Moustache Spencer”) is far more agile, but loses what made him special in the process. In his previous outing, reeling in his arm would cause Spencer to come to a complete stop, forcing the player to reevaluate their next maneuver. It was slow and methodical, but encouraged players to think before they swung. Moustache Spencer can reel in and out at will, as well as start swinging at any point from a complete stop. And, of course, he can now jump. These new abilities make him more capable than ever, but the main game rarely requires them. Enemies only shoot horizontally—even on hard mode—and levels are typically large and open, presenting a greater cushion for a fall. FatShark’s “bigger, better, and more badass” treatment in the sequel resembles a Boy Scout trying to earn his merit badge by helping a completely capable woman cross the road.

New restrictions have been imposed, too, but they’re largely unnecessary. The player must now choose between one passive ability and an active power—which should be an interesting tactical decision, but becomes an unnecessary trip to the menu screen. Hacking terminals, for example, shouldn’t come at the expense of grenades.

Elsewhere, Spencer’s new arsenal is largely redundant. To wit: Bionic Commando Rearmed’s shotgun was useful not just for its immense firepower; its kickback would send a dangling Spencer swinging again. Now that he can swing of his own volition, and his default pistol has been upgraded to a rapid-fire instrument of death, the shotgun’s benefits are moot.

While Spencer’s new tricks topple the balance of the game’s story mode, they’re used more effectively in its challenge rooms—virtual-reality obstacle courses devoid of combat. These stages are often built around Spencer’s new maneuvers, so leaping, wall jumping, and reeling in and out are no longer superfluous, but necessary, demanding players master their intricacies. It’s here that we get the best glimpse at what Bionic Commando Rearmed 2 could have been.

Bionic Commando was always more memorable for what its hero couldn’t do. It was about making the most of Spencer’s disability. Here, he’s given the tools to succeed.