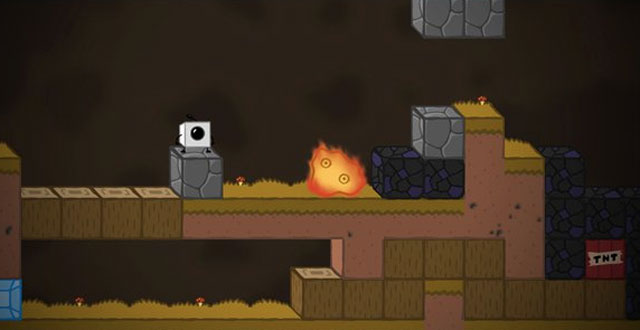 At first I thought the name was something of a joke. I searched the Xbox Live Indie  Games database for games starting with “B.” After a surreal stretch of titles featuring Babies and Battles and Beer, I stumbled upon the first of 11 separate games about Blocks. Then, behold, the new puzzle-platformer I’d been assigned to review: Blocks That Matter. The name, and its placement at the end of such a litany, read like a well-natured jibe at its competitors. Kill or Smash or Bust all the Blocks you want, but only here will you find something truly important.

But after playing the first release by Swing Swing Submarine, a small team headed by “two young and stupid French guys” who used to work for Ubisoft, I realized they would never lambast their competition. They are too in love with the history of games to spoil its waters with name-calling. Yet their influences will not be unlocked so easily. Blocks That Matter is less a love letter to game developers than it is a ransom note.

Others will tell you this game is a mashup of Tetris and Minecraft, with a smidge of Super Mario Bros. And they would be right. Blocks That Matter is, in fact, a vast evolution of a previous experiment called Tuper Tario Tros., where you switched between Flash versions of Miyamoto’s NES classic and Pajitnov’s puzzler, complete with stolen sound effects and other copyright infringement, to move forward. This new game creates its own mythos and play mechanics. There’s something of a meta-story at work, with a nefarious villain kidnapping the developers of a super-secret game that isn’t a game at all, but a high-tech miniature robot with an embedded drill. (Stay with me.)

Anyway, your character (the robot) must progress through 40 levels in order to save its creators. You’ll leap across platforms, open doors, and destroy obstacles, avoiding crawling slimes and dripping flame all the way. To do so you need to mine special varieties of blocks from the environment, then recapitulate them back into the level in the shape of tetrominoes, pieces four squares large made famous by everybody’s mom’s favorite puzzle game. (Okay, my mom’s favorite.) Sometimes they act as a stepping stone; other times they’ll activate a switch or crush an enemy. Each block works differently. Wood burns. Sand falls down. It’s how you manage these blocks, both as part of your environment and as puzzle pieces to manipulate, that creates the game’s unique tension, a mixture of brain-tease and physical timing.

But none of this interests me. Mind you, I loved Blocks That Matter. It is well worth your 240 Microsoft points. The game’s secret reason for being, though, is its deference to what came before. This is a block game in love with block games. In each level there is a special block resembling a locked crate. Complete the level with this crate in tow and it will hover in the middle of the screen, burst open in a windmill of light and shadow, and reveal a game to seek out and play.

These are not demos. Nor are they in-game content that can aid your progress. They are small graphical boxes, adorned in the spirit of the games they represent, with information on who the developers were and on which platforms they appeared. A message unfurls across the screen: “You found a new Block That Matters.” A-ha! The titular gesture was never meant for their own game, but everyone else’s.

So fitting, that a game about building and exploring—essentially, the act of discovery—hides within its interwoven goals the true task at hand: to discover gems yet experienced. Gregory Horrow Show for PS2? Karoshi, a cult-classic freeware game now on iPhone? One Eye Adventure, an upcoming indie game by Gromy? Consider yourself added to the list.

But then I noticed something, the first in a string of epiphanies linked with domino precision. The first level, named “In the Lab,” reveals within its bonus crate a picture of your loyal companion, from Valve’s Portal. The secret game revealed in the “Exploration” level is Spelunky; in “Lines Creator,” Tetris itself. The level’s title corresponds to the hidden games. A cute nod to observant players, and nothing revelatory. But after completing the main level sequence and, in a fit of irregular OCD, resuming my quest for every bonus crate, I realized that the secret game, in some cases, even hints at the manner of attaining the bonus. (Woe to you who’s never found the Warp Zone in World 1-2, for you shan’t find your 100 percent here.)

And so the last piece falls into place. The act of reading level titles becomes a game itself, one to solve in order to find the bonus crate, in order to discover the next game… I take a breath.

Blocks That Matter is a game, cubed.