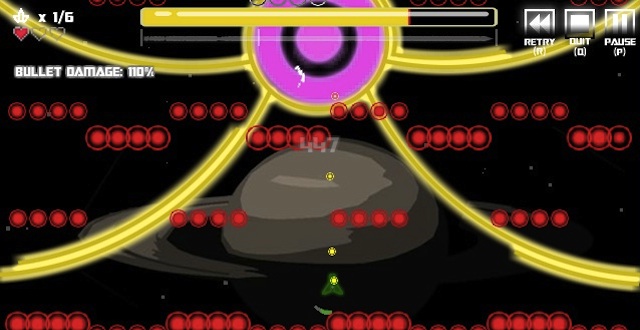 I know why I don’t like Bullet Audyssey. It’s meant to be a music-based shoot ’em up. A boss-rush shmup with emphasis on the beat. The game and the music are supposed to be inseparable. So why does it allow me the option to mute the music? And why does muting it not make any difference?

Bullet Audyssey isn’t a bad game, but it is crude. The battles all take place on one screen: you are meant to duck and weave between scads of bullets and fire back at the weak spots. Going near bullets absorbs their energy, allowing you to shoot or slow down time. The slowing of time is necessary because some of the stages just saturate the playing field with bullets. Again, crude: there’s no finesse to the bullet patterns. The slow-down button is a crutch for uninspired design. There is also an upgrade system, less because it is necessary than because it fuels the sense of progression.

Music has always been a part of shooters, from the very first. As the little space invaders in, ahem, Space Invaders inched closer to the little spaceship that could, the tempo picked up. Shooters are all about timing. So is music. They compliment each other, run parallel to each other. It’s been explored, it’s been done, it is part of the vocabulary of vertical shooters. Jonathan Mak’s Everyday Shooter is a textbook example of the ways music and shooters can interact and play off of each other. That is just one example. The art of the shmup has evolved, been torn down, deconstructed, reconstructed. It has had its renaissance and its dark ages. What I’m saying is that you have to bring a little more to the conversation than just “The bullets are shot to a beat.” It’s like drawing a bowl of fruit on your first day of drawing class.

Bullet Audyssey comes to us courtesy of Cellar Door Games, a usually reliable purveyor of Flash games. Their “better than you’d expect from the title” Don’t Shit Your Pants, the clever I Have 1 Day, and Villainous are worth looking into. They do what Bullet Audyssey doesn’t: look at a genre from a slightly different angle. This is a miss for them. The game’s not music, just noise.