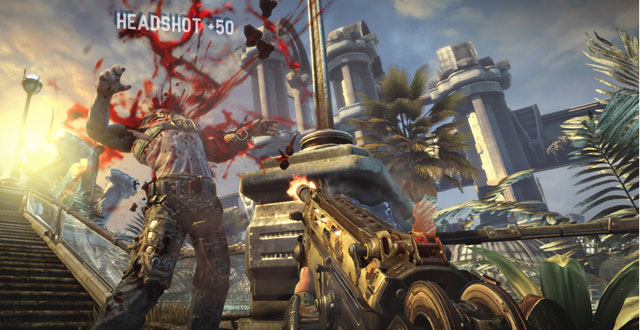 Bulletstorm is pretty far outside of my sissy wheelhouse. I mean, I listen to chamber music. Drink kombucha. Subscribe to Harper’s. I usually don’t like first-person shooters, unless they have strong role-playing elements à la Fallout; and never watch action movies of the gun-shooting, car-chasing, explosion-porn variety. I’ve tried. I played some GoldenEye 007 in college, which mostly involved getting capped by unseen assassins within moments of spawning. Around the same time, I would go see high-octane action movies with friends, feigning enthusiasm even though I’d secretly have preferred something whimsical by Hayao Miyazaki. But I love Bulletstorm, a first-person shooter than seems explicitly designed for people who usually hate first-person shooters.

To challenge film for storytelling supremacy is a holy grail for videogames, but with the exceptions of standouts like BioShock and Red Dead Redemption, the search thus far has resulted in more Monty Python slapstick than Arthurian grandeur. Gun-heavy action, with its thin characterization and adrenaline rhythm, seems like gaming’s best opportunity to challenge film on its own turf. After all, it’s patently more fun to blow something up yourself than to watch someone else do it. But too often, action movies lose their freewheeling pace when translated into an interactive medium, and your badass hero becomes a klutz.

In many of the most celebrated shooters, the emphasis on punishing difficulty turns what should be a wanton romp into a bitter slog for me. I’ve heard a lot about Gears of War’s amazing production values, but I’ve barely experienced any of them, because the game creams me on its easiest difficulty setting. It’s the same deal with Halo—every so often I’ll decide to give it another shot. But I quickly get stuck, realizing simultaneously that I don’t care that I’m stuck; and pop in something cushy like Kirby’s Epic Yarn to calm my nerves. Now, I’m not saying there’s anything wrong with punishing shooters that cater to elite fraggers—but what about those of us with shabby twitch reflexes and no specialized military training? Couldn’t there be a few shooters that let us wreak operatic carnage too?

Enter Bulletstorm, which I breezed through on “Normal” difficulty—having a blast the whole time. Unlike Gears and Halo, whose pleasures seem to derive from mastering complex maneuvers and surmounting increasingly impossible odds, the cartoonish, obliging physics of Bulletstorm are always on the player’s side. You control a dopey but stout-hearted mercenary named Grayson, whose hair makes him look like Wolverine just out of the sauna, and whose raft of abilities tilt the odds heavily in his favor. He can basically turn any horizontal surface into a waterslide, stopping only when he runs into enemies and sends them sprawling. He can also hurl them into with air with his energy leash, in super-slow motion, setting up sadistic kill shots. Environmental hazards like Venus flytraps and exposed rebar are slightly magnetized, so that just kicking an assailant in their general direction results in gore. Enemies scramble out of cover under sniper fire, and Grayson’s rifle has steerable bullets to get around obstacles. His immortal AI teammates are helpful without stealing all his kills.

Gun-heavy action, with its thin characterization and adrenaline rhythm, seems like gaming’s best opportunity to challenge film on its own turf.

In lieu of excessive difficulty, Bulletstorm supplies depth and replay value via an ingenious upgrade system that encourages experimentation and play. You earn skill points that can be spent on ammo and weapons by accomplishing wildly specific, humorously juvenile feats of carnage such as, and I quote, “Shoot enemy in the balls and kick or shoot his head off.” (You’re not going to see any shit like that in Harper’s.) You could just go for the quick headshot—or you could drag an enemy toward you with your leash, kick them back in the other direction, and guide a sniper bullet up the keister while they float in the air for a “Rear Entry” bonus. Because of this system, overachievers will have plenty to keep them occupied, while more casual players can simply enjoy the game’s remarkable flow and pacing.

Bulletstorm’s relative lack of difficulty is directly responsible for that ideal flow: it actually feels cinematic. While the story and rhythm of super-hard shooters get indigestibly broken up in retry loops, Bulletstorm proceeded so smoothly that I was able to follow the storyline (which, while related in a merrily profane tone, raises credibly thought-provoking questions about loyalty and moral responsibility). Then there’s the impeccable rhythm of the gameplay itself. At moments I would pause to gaze out over a stunning bay, before running into the next room to try and shoot an incendiary rocket into a mutant’s scrotum; and the beauty of these lulls was sharpened by the taut momentum of the amazing set pieces around them.

Whether you’re suddenly falling through a floor or being chased by a giant spiked wheel, Bulletstorm never feels inert. It’s both polished and vibrant, as if the world of Gears had been coated with candy. One stage is a model city that your rampage through, Godzilla-sized, as tiny cars whiz by your feet. Another is a slowly collapsing building, shifting all around you. If you enter any kind of conveyance, be it spaceship, cable car, or helicopter, it will crash. And most importantly, for all the hardships he faces, our hero is clearly enjoying himself. In the mini-city stage, a giant humanoid lizard shows up, which turns out to be a robot, which you subsequently get to control. “Goddamn,” Grayson cries, “This is even cooler than it looks!”

It is. Bulletstorm eschews tactical rigor and grim visuals in favor of a much freer and more joyous play style, coming down firmly on the side of entertainment. It’s B-movie madness with Michael Bay production values, and arguably works better than it would on the silver screen. Even the game’s sixth-grade humor lets on that we don’t have to take it too seriously: we can, refreshingly, just play.