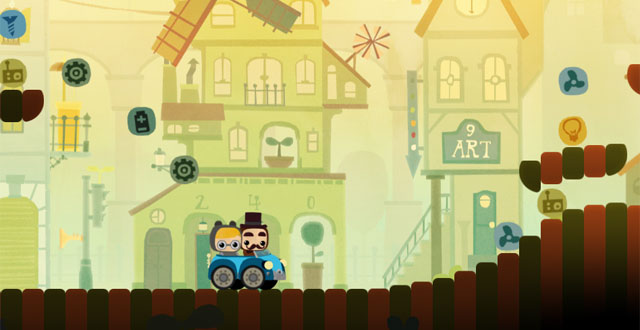 Two game journalists are in a bar. “Bumpy Road is really cute,” says one, to which the other replies, “Yeah. Even though there are many cute games for the iPhone, this one has a nice style that feels fully realized, as if I’m playing a cute animation.”

“Also, its central mechanic, touching the screen to bump the road, which causes the car to roll quickly down an accordion incline, slow down in a makeshift valley, and even fly into the air, encourages experimentation and play. This makes it unlike most games that scroll endlessly from left to right, which have you tighten your reflexes and chase the high score,” says the first. “It’s kind of like Solipskier.”

They turn to a third game journalist who has been listening and nodding to this exchange. “Have you played it yet?” they ask.

I don’t disagree with you, he says, but what most strikes me about Bumpy Road is the way it captures time. I would like to describe, as a critic, why I find this game so affecting. Why playing it means feeling love, not love for the designers or the medium or the state of being meaningfully distracted or the sense of communion with everyone who does this or even the game itself, but love. The feeling of love.

What happens in a side-scrolling game in the grand tradition of Super Mario Bros. is essentially frozen in time. As the character, Mario, moves forward, or the camera moves forward on its own volition and Mario must follow, as in the more nerve-fraying levels, more obstacles are uncovered on the screen. Mario only moves forward when a problem has been resolved. And so these games are about solving problems that reveal more problems to solve. They depict events in a world, but they do not depict time.

Recently in side-scrolling games, we see a newfound awareness of the character’s body in the world. Take the puzzle-platformer Limbo and the beat-’em-up Shank, two visually sophisticated games that tell linear stories. Except when there is a puzzle to solve, or a gang of people to kill, respectively, when the body moves forward in these games, time also moves forward.

In Limbo, the boy walks rightward through a dark forest that seamlessly leads into an industrial ruin and then a ghost town. In Shank, the man finds a poster in a bar advertising a wrestling match, fights through the bar, runs outside through the town and across its rooftops, and inevitably ends up at the wrestling arena, somewhere far to the right of the bar. Both games show that as the character moves left to right and the background changes accordingly, he is traversing a geographical space, which means that time is passing. When he stops moving, time stops moving. The body standing in the middle of the screen indicates a specific point in time. The passage of time resembles the unfurling of a film. When you press forward, you spin the reel, and play the story.

This coupling of the landscape to the timeline, the body to the single moment, is a powerful dramatic device that we find cleverly compressed on the iPhone, which favors “endless” games like Bumpy Road. Movement in these games is automatic. They must use randomly assembled landscapes and infinitely looping backgrounds to convey the sensation of moving through space, but trap the player in time, like Bruce Willis in 12 Monkeys or Tom chasing Jerry. Although everything is moving, nothing really moves.

Nonetheless they are also stories. A majority of endless games—Canabalt, Tiny Wings, Hook Worlds, Air Supply—represent an escape scenario. This makes sense, because why else would a character be running endlessly from left to right, with no destination? An escape is a story that fits an aimless, formless game world like a glove. Such a world depicts one slice in time, demarcated by when you begin the game and fail the game. An endless game is thus not about the passing of time, but about the present moment. These are stories of urgency.

When one returns to the present, one knows that the two are not only there in some blue car, but are still together, still driving the car they bought together, and still the same people they once were.

But Bumpy Road is more ambitious, and much more subtle, so that its meaning settles in across several, dozens, hundreds of play sessions—and continues to live in any number, because it is so resonant and precise. The body in Bumpy Road is a car in which a man and woman are riding. They are a couple. In one mode, Sunday Trip, they are racing to a finish line in the countryside. This mode is less satisfying because one is supposed to speed up the car with boosters in the world that do not also speed up the scrolling of the game, which makes Sunday Trip feel conflicted. Is it a race or a trip? Also, the mode is less satisfying because it definitely ends.

Evergreen Ride is the primary mode. The couple is driving through a city and picking up as many little screws, batteries, and cogs that it can reach, because without them the car will run out of fuel and bring the ride to a sad halt. As you mentioned, you may only indirectly move the car, by bumping it around the road. If you leave the car alone, it keeps putting along, but so slowly that you really must intervene in order to send the couple on its happy way.

What is presently happening in Bumpy Road is not an escape, but a leisurely drive. In contrast to an endless escape, which dangles before us the empty promise of safety, an aimless ride in a car really is what it is. But how is that compelling? One answer is flashbacks. When enough bits are picked up, raising the fuel meter above a threshold, this triggers a temporary bonus section that shows the couple driving through a grainy black-and-white city—obviously, their past, a flash of their memory. Upon returning to the present, one realizes this couple has an actual history. One did, after all, just play it.

The other answer is Memory Lane, a slideshow of pictures one picks up in Evergreen Ride. Assembled in sequence, these slides tell a story of how the couple met, how they got the car, and the things that happened afterward. When one returns to the present, one knows that the two are not only there in some blue car, but are still together, still driving the car they bought together, and still the same people they once were. I’ve never been so eager to collect things in a game. Each new slide deepens both their history and their mystery.

Unlike the aforementioned endless games, the car in Bumpy Road does not stay in the middle of the screen as it putts along. As I bump the road, the car lurches prematurely to the right, or rolls back to the left, collecting bits I missed on my first pass. Meanwhile, the game continues to scroll left to right, and I can even use the left and right edges to stop the car when I send it flying.

This is significant. The car is moving independently of the camera. In fact, it is significant that there is a discernible camera at all. This is a tracking shot. The couple and their car have nothing to do with the movement of time in Bumpy Road. Their body does not indicate a mark in time, but only itself: a body. Well, two bodies, riding in the car that they bought. What appears on the screen is not story time, but—seen through the camera—recorded time, which doesn’t tell, only reveals. In other words, we are not really part of this moment in time, but are at a distance watching the couple have their moment.

If we play long enough, we see nightfall in Evergreen Ride. There is a day/night cycle in this game. I know. The obstacles become harder, and the game will probably end soon, but the transition is quietly exhilarating. The man and woman have been enjoying this moment for a long time.

And this is the brilliance of bumping the road: I can touch the surroundings, but never their bodies. For their bodies, and by extension their minds and motivations, are private. The two are perfectly, lovingly, in their own world. As I play, I understand this feeling as intimately as if I were outside my own body, watching myself together with a loved one. Love may endure, but a relationship is a bumpy road. Sometimes you’ll run out of gas. Sometimes you’ll drive the two of you headfirst into a canal.

The game journalist has been staring ruefully at his drink, which is long gone. He looks up to see if the others are still listening. They are actually standing on the other side of the room, playing Big Buck Hunter.