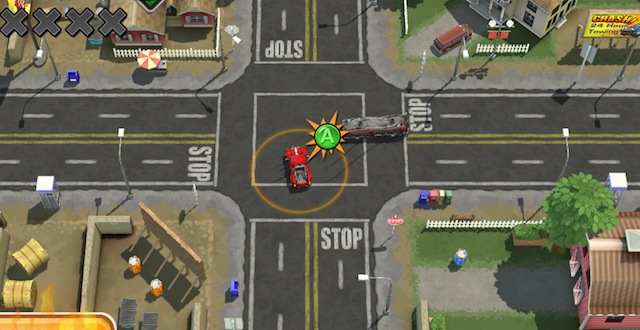 Ever since we’ve been racing cars, we’ve had a strange fascination with watching them crash. We tune into uneventful races; we watch them for several minutes, hoping to catch some kind of destructive spectacle. We want to see some chaos introduced into the semblance of order that’s been inflicted on our lives and our world. Most of us seek that out in ways that don’t affect us directly: on television, in music, in summer blockbusters, and in our games.

The Burnout series brought that desire to the forefront. The ability to drive, flip, and wreck all sorts of vehicles beautifully satiated the urge for chaos. Combining realistic-enough graphics and a blinding sense of speed, Burnout kept the player focused on a primary goal while also rewarding them for taking risks. Near-misses, driving in the wrong lane, and excessive drifting were all rewarded, resulting more often than not in total destruction.

The key was that the destruction is never guaranteed. There was always the chance that you would pull off a number of risky moves and come out all right. That order was something to aspire to—our lawful, loving, aware self. But it doesn’t take long for us to sabotage that aspiration. In those moments, when our experience veers from the virtuous norm, we find ourselves delighted: at the carnage, at collision, at the act of uncontrollable flight.

The new downloadable Burnout CRASH!—with its single focus, and its exclamation-mark sensibility—means to satisfy something natural and restrained within us, giving us permission to unleash our fury on the unsuspecting public. The game gives us the perfect overhead view, for a strategic perspective, and asks that we drive straight into traffic. With a single button, we explode, and we aim ourselves at various cars and buildings. The city exists to consume our wrath—not to dissuade it.

“Whoa, dude, that crash was radical!”

Still, this excitement doesn’t last long, because the crash—and the game—lasts forever: 18 intersections, each with three game modes to play through over and over, like some kind of cute Groundhog Day. It’s so unbearably clear that the game world exists for us to act on our destructive tendencies, that the whole thing starts to seem just a little too permissible. This stale non-rebellion is driven home by the constant, pushy announcer who does everything he can to cheer on your own obsession with wrecking everything in your path. Just as things are getting fun, this guy feels the need to say some weirdly stereotypical thing in some bad accent—he’s pretending to be a southern hillbilly, a surfer dude, an Italian. This guy has the potential to be the last straw.

So here you are: your dreams are realized. You’ve cast off all restraints, social and cultural norms. You’ve bent them to your will, and you’ve been given a place to do whatever you want with the vehicle of your choice. The rules in this universe were meant to be broken, smashed, and burned. As you crash into the side of a minivan, with a satisfying thud, find yourself floating upward, looking down on your car (it looks so tiny from up here) and time begins to slow. After watching the same crash in slow motion for seven hours, the satisfying thud morphs into a sickening one. The guy in the minivan gets out, looks up at you, flashes you a smile, and says “Whoa, dude, that crash was radical!”

You’re not sure—you wouldn’t call it fun, necessarily. But at least it was something.