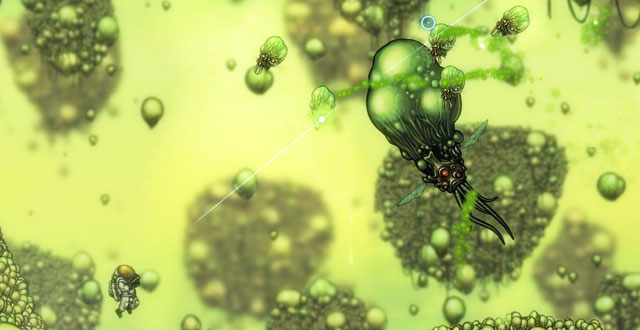 Does the joy of movement come from the deprivation of movement? Capsized, for all its beautiful appearance of an indie platformer, is more Quake than Braid—and, that said, is very much about movement. And rocket blasts.

Stranded on an alien planet, a group of astronauts tries to escape its doom, despite comically impossible odds in a giant world filled with environmental dangers and murderous aliens. Whereas other games (think Bulletstorm) use the premise of being stranded on an alien world to make a shooting gallery out of alien life, Capsized tries to teach something about movement. It’s a vital lesson, really. While the alien flora and fauna float, fly, and run around trying to exterminate human life, the astronauts swing wildly through the levels, using a bungee rope attached to a grappling hook, jetpacks, and air blasters to propel themselves through low gravity.

This is a planet where red sacks containing terrible, terrible spider-creatures hang from the ceiling; where weird green bugs attack you from all directions; and the locals want to skewer you with spears. The one thing that allows the astronauts to cling to their humanity is not civilization, in the strictest sense, but the simple act of moving. If the astronauts stop moving, they will die.

The humans of Capsized are from a future informed by Quake’s impossible bunny hops: exploits in the game code that would accelerate continuous jumps and finally result in inhumanly fast players who were almost impossible to hit. Capsized embraces these glitch aesthetics by allowing the player to exploit physics, rather than being restrained by them. The physics are loose and allow for surprising movement. They are, using a definition by the scholar and designer Iman Moradi, “glitch-alike” in their deliberate recreation of unexpected, accidental glitches or errors in the game that feel false and deny our idea of how the game should behave. Even the secret power-up hideouts in Capsized use this understanding of a “faulty” game world. Like a quality-assurance tester, you have to bump against level walls until one of them turns out to be a secret passage.

If you find your astronaut in a particularly tight spot, you can nail his bungee-grappling-hook to the floor, vault off one of the many nearby cliffs, and (set to the soothing space-ambient of Solar Fields) propel his tiny body with unexpected verve into the alien atmosphere. You might then fire your air blaster to get away from a nasty alien, and use the jetpack just before tumbling into a poisonous gas pit—to finally get skewered by a spear. In short, it’s a sheer joy flinging astronauts through space.

But for all the joy Capsized emits, it is too much a videogame to allow pure play.

A while ago, Jim Rossignol complained about the abandonment of innovative, “supernatural” physics-defying movement in first-person shooters, in favor of a codified version of real-life-movement or, at best, a simple simulation of parkour. Quake players could use the bunny hop and rocket jump to turn into superhuman cannonballs, flying through levels meant to be walked through; and it seems that those supernatural modes of movement are now largely present in games such as Capsized, VVVVVV, and Super Meat Boy. Maybe this is due to the cartoon-like approach used by 2D platformers, or maybe it’s because we grew not to expect realism from 2D games—and chose instead to connect them to our childhoods or, at least, the early beginnings of the medium.

For a short time, Capsized allows full-on supernatural, gravity-defying, physics-destroying, joyful movement through colorful alien worlds. But for all the joy Capsized emits, it is too much a videogame to allow pure play. Instead, it insists on letting your astronaut trod through beautiful yet narrow caves unsuited for the astronaut’s tools. Shoot your hook wherever you please, and you’ll only manage to bash your head into the ceiling. Only the last third of Capsized shows the game at its best, with floating alien islands and huge areas to swoosh around in.

The music should have been a giveaway: it’s not music for fighting aliens; it’s for soaring through skies with a New Age grappling hook. Were narrow caves needed to make the player feel joy once set loose? I don’t think so. Other games have already done their part to tie us to the ground.