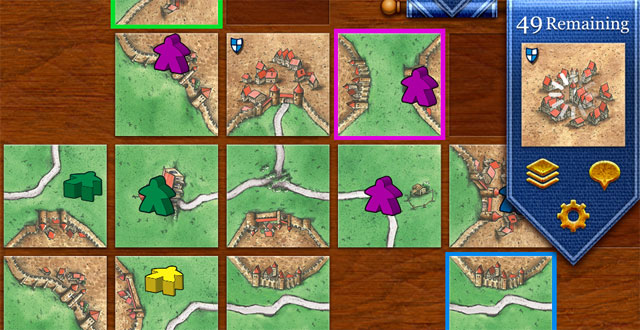 It would come down to a land grab. Jules and I had been farming on separate sides of the map, but as the game progressed, our farms grew together, changing the mien of our game. One sprawling farm had emerged from our separate farms, and we both had equal claim to it. Eddy was too far behind for it to matter. Jess, too, was out of contention. I had the lead, but the outcome was very much in question. Jules could eke out a win by taking over this massive farm. He knew it, and so did I.

Entanglement—the state of being inseparably attached to your opponent—is at the heart of Carcassonne, the German-born boardgame about building fortified medieval cities. Carcassonne’s designer Klaus-Jürgen Wrede has said his tile-matching game was inspired by the lay of the land of the ancient French town for which it is named, and not by its violent history of changing hands. Carcassonne’s struggle is that of political intrigue, of keeping up with the Joneses, and of moving up the corporate ladder. It’s a backhanded struggle in which you’ll do anything to get ahead of your so-called friends. Carcassonne may lack direct conflict, but terms like cock block, cutthroat, and parasite apply.

Jules was a parasite. He was in possession of a tiny patch of land that seemed worthless to me. It sat on an errant offshoot of the map that wound up making the landscape look like it was planned by a city counsel at war with itself, which, in a way, it was. But our large farm sat near his tiny plot, and Jules suddenly posed a threat. It was late in the game, but with a few lucky draws and some crafty tile laying, Jules could graft his plot onto what was once “my” farm, effectively stealing it from me.

For a game themed around the concept of city planning, it’s rare when parties actually work together to construct a farm, and then only out of mutual self-interest. Playing Carcassonne is like assembling a jigsaw puzzle; yet the nature of greed assures that the tiles seldom make a pretty picture. Instead, tiles are scattered in adverse directions. Roads wind aimlessly around the countryside and dead-end. Awkwardly-shaped cities drop off the side of a cliff. Churches are neglected. The result often looks like a map sketched by Picasso.

Strategy comes in layers. First, you learn how to play. A grass tile can be positioned next to grass, a road next to a road, a wall to a wall; and if you’re playing with an expansion pack, a river to a river. You can place a follower, commonly known as a meeple, on your tile, as if to say, “This belongs to me.” Yet no sooner than you do, other players, like hungry vultures, swoop in and devour what was yours, erecting ramparts and paving snaky roads, trying to latch on to your investment.

Then, you learn to be a dick. You pick up on techniques to weasel in on others’ property. And you devise underhanded ways to keep opponents from getting ahead, like running a road directly into their prize castle, making it impossible for them to lay the final square of mortar and complete it. As you play, you learn how to keep out the weeds. You build to reduce the prospect of a wrench being thrown in your best-laid plans. Sometimes this takes strategy, considering not only the face of a tile, but also its position. Other times, you play the odds. (How likely is it he will draw that tile?) Sometimes, you get lucky.

Jules needed to get lucky. If he drew a tile that connected his measly plot of land to our big farm, he’d outnumber me. He’d overtake the farm, and all the points would go to him. I needed to stop him.

His turn came and went. As did mine. Nothing. Another tension-filled round passed. Then—Ah!—I got what I needed: a crossroad tile, which I strategically placed on the table, cutting Jules off at the pass, killing his drive. And with that, the game was mine. Carcassonne‘s elegance is in how it flips a straightforward, non-confrontational building game into a tense and underhanded struggle for possession. It’s a dog-eat-dog world, played with handsome wooden pieces on cardboard tiles of pastoral scenes. You do what you can to survive.