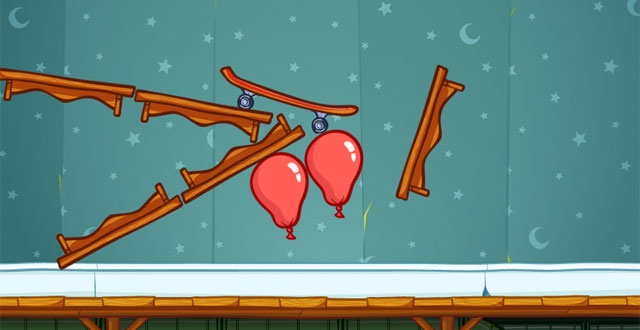 I had finally done it. After obsessing over the puzzle for hours, I had positioned the hamster wheels, the basketballs, the conveyor belts, and the boxing glove just so, and managed to break the goldfish bowl. It was an odd goal, but it was the goal I was given. I was just a student in middle school, but I felt like a rocket scientist.

Those of us who played The Incredible Machine in the heyday of computer gaming never forgot about it. In asking me to complete various tasks in the most roundabout ways, the game changed the way I thought about household objects, inspiring me to create my own Rube Goldberg machine out of my mom’s pots and pans. I began to obsess over cause and effect, the design of the objects around me, and the inner workings of anything mechanical. The Incredible Machine unlocked something inside my brain.

I was too lazy and bad at math to be a full-fledged mechanic or engineer. Instead, I marveled at a friend’s clear telephone—I studied it for 30 minutes, pretending to listen as he went on about a girl he liked. Another friend and I committed to build a robot, but we lacked the funds. For a school project I was determined to build a small hovercraft out of a fan and a remote-controlled boat; my parents told me it could never be done. They were right about that one.

Just like my plan for a hovercraft, The Incredible Machine came and went quietly. Though the game enjoyed a certain amount of success in its time, it was quickly forgotten after a few lackluster sequels, especially when console gaming began to eclipse PC gaming. Games were no longer about creativity, interacting and experimenting with objects, and unlocking our untapped intellectual potential. Instead, they were about reflexes, aiming, and persistence. Joysticks, buttons, and the television took precedence over the keyboard, the mouse, and the monitor. I was convinced that Sonic the Hedgehog was better than Mario because he was super-fast. Blast Processing was the great hope of the new generation of games. Let’s be honest: games were getting kind of dumb. So was I.

Let’s be honest: games were getting kind of dumb. So was I.

But I never forgot about The Incredible Machine, and the feeling of taking the time to think about and solve a problem—a feeling that returned the instant I started Casey’s Contraptions. The perfect storm of touch controls, the iPad’s large monitor, and the popularity of physics-based puzzle games on the App Store made something like Casey’s Contraptions inevitable. It’s a game whose time has come. The only question was whether it would live up to the kind of nostalgic praise that has been heaped onto its predecessor.

A few things have changed. Most noteworthy is the framing of the game around Casey, a little boy who spends his days grabbing odds and ends around the house and playing with them. Throughout the course of the game, a balloon and a bucket of tennis balls becomes a hot-air balloon containing two explorers; a doll becomes the stranded victim of a house fire; and a laundry basket becomes a water tank. The movement of these objects feels loose and realistic, allowing for a number of possibilities given an assortment of tools. Goals are specific, but the ways of acquiring them are often surprisingly varied. I can use a skateboard and shelves to guide the laundry basket under the doll to catch it; or I can place a pinball bumper under the doll and bounce it into the laundry basket.

By simply dragging around the supplied tools and pressing the play button, we see the results of our creations. We fail, we fine-tune our machine, and we try again. There are no limits to this—experimentation is only encouraged, never penalized. And by tempting the player to acquire stars that are completely out of the way of the most direct path to the goal, Casey’s Contraptions encourages more and more creative solutions. The more excessive the contraption, the better.

Abandoning the clinical, no-nonsense approach of The Incredible Machine, Casey’s Contraptions focuses less on figuring things out and more on creativity and play. I spent much of my early adolescence with The Incredible Machine struggling to discover what I was missing—how the pieces were meant to fit together—and working from the left side of my brain. This time, I’m less interested in the intended solution (which is readily available to watch whenever I’m stuck) and more interested in my own solutions, and those of my GameCenter friends, also on display. After playing Casey’s Contraptions, I feel less like a rocket scientist and more like a child, convinced that I can build a hovercraft with nothing but a balloon and a skateboard.