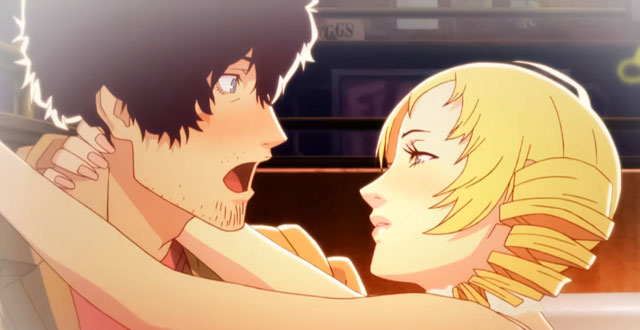 Sigmund Freud, whether you like him or not, helped redefine our attitude toward the human mind and brought psychoanalysis into the mainstream. His work on psychosexuality and dream states brought new meaning to the power of the human subconscious and the importance of self-acualization—of us reaching our potential.

Vincent Brooks is not a self-actualized young man. In fact he begins as juvenile, callow, insecure, and a borderline alcoholic. One might even call him sheepish.

By day, the protagonist of Atlus’ morality play, Catherine, is torn between two lovers—Katherine, his cold, distant long-term girlfriend; and the mysterious, bubbly, blond titular character. Catherine suddenly appears one night at Vincent and his friends’ favourite haunt: a bar called The Stray Sheep. As Vincent drinks himself stupid, we are led to believe the scantily clad Catherine swiftly seduces him. For subsequent days, when Vincent awakes, he can remember nothing about the night before, nor can he figure out why this strange woman is in his bed. This anxiety is bundled with Katherine’s pressures of marriage and a possible pregnancy.

Yet, messing up a possible path results in painful, exhausting backtracking that often ends in demise. All Vincent needs to do is be honest with his virtual lovers, with himself—the path is quite simple. Our own short-sightedness makes it difficult.

By night, Vincent is being pursued by a mythic personification of his own insecurities. Astaroth, known in demonology as the Crowned Prince of Hell, taunts Vincent and an assortment of other men—cheaters, or those who refuse to commit to their girlfriends—as they struggle to climb a series of increasingly tortuous walls made of moveable and non-moveable blocks without dying. The promise is that when any one of these men reaches the final area—The Cathedral—he will be granted his freedom. Everyone in this world appears to you as a sheep. And go figure—that’s how Vincent supposedly appears to everyone else.

These are Vincent’s nightmares. For nine nights, he is thrust into this metaphysical, Freudian dream world. It’s not worth seeking phallic imagery throughout Catherine, or trying to construct a nonexistent Oedipal conflict. But symbols of Vincent’s psychosexuality and subconscious are embedded in the gameplay—so much so that one may wonder what a couch session between Freud and Vincent would be like. Upon loading the main menu for the first time, it is made clear that the block towers, which slowly fall out from under Vincent, should be treated as a metaphor for the “blocks” in his life.

The falling blocks do not simply represent Vincent’s problems; contained within them are usually simple solutions: his drive to survive and his desire for love. All I have to do is push and pull blocks so that at least two of their edges connect, building staircases and ledges to take me to my goal at the top. All Vincent really has to do is talk to Katherine, be honest with her, let his feelings be known. In front of me is a flat wall interlinked with moveable and unmoveable blocks. All I have to do is pull out the right three blocks, push them into a row, and climb up. I build a pyramid up to the next checkpoint. Easy. Yet, messing up a possible path results in painful, exhausting backtracking that often ends in demise. All Vincent needs to do is be honest with his virtual lovers, with himself—the path is quite simple. Our own short-sightedness makes it difficult.

But the real Freudian kick in the genitals surfaces during the boss battles: each area is essentially a speedrun, as rows of blocks fall out from under Vincent as he climbs. This becomes particularly demanding during final areas. Each boss represents some monstrous perversion of whatever is troubling Vincent’s conscious self: a morbid Katherine brandishes a menacing fork and berates Vincent for not taking “responsibility”; an embodiment of Vincent’s darker side tries to tempt him. Catherine purports itself to be a “romantic horror”; I’m not sure it entirely succeeds, but I can say that there is little more terrifying than being chased by a giant talking baby with a chainsaw in one hand and a machine gun in its mouth.

Freudian tendencies bleed into daytime as well: Vincent’s three friends, the stoic, morose Jonny, the hedonistic (but woeful and pathetic) Orlando, and the naïve Toby can be looked upon as representations of the superego, id, and ego—in that order. Jonny is too concerned with how he’s looked upon by others. Orlando is far too worried about himself. Toby is the only one untroubled by the nightmarish game of Jenga—owing as much to his inexperience as to his strong moral fiber. The worldlier Orlando and Jonny often provide Vincent with advice, but this only demonstrates his need to develop a healthy ego from the experiences and anxieties Orlando and Jonny represent. This trinity is not limited to his friends; Vincent’s very id-like reticence to commit and accept change is embodied in Catherine’s appearance. His superego-esque inability to express himself for fear of reprisal surfaces in Katherine’s incessant browbeating. His ego may be embodied by the final acquisition of “true freedom,” attained only when he finally overcomes his nightmares, his anxieties.

While the night-time portion of the game consists of puzzles, the daytime portion is effectively a Persona­-influenced dating sim, where the player is charged with managing Vincent’s relationships. These sound incompatible, but in many ways the two genres balance the story quite beautifully: small touches bring the two vastly different worlds together. The most obvious crossover is the fact that “sheep” you meet in the dream world—often men you speak to while exploring the bar—will be found dead the next day. The bar’s arcade game Rapunzel is both mini-game and metagame, mimicking the gameplay of the dream state, allowing the player to practice, reflect: Orlando notes how simple the game is once you “get the trick.” Text messages allow Vincent to communicate with both women using a variety of dialogue options, which helps produce one of eight separate endings. But this also acts as a HUD for your progress, as received texts will tell you how you fared in the previous night’s area.

One may argue that some of these frayed ends create an interesting polemic in the game, which they no doubt do. But I doubt that this was an entirely conscious effort.

Loading screens contain quotations from a variety of authors—from Blaise Pascal to Rodney Dangerfield—on the subjects of gender dynamics, marriage, sexuality, and personal growth. Apropos to the multifaceted nature of the game, many of these quotations actually contradict each other, bringing to the fore a spectrum of different perspectives on Catherine’s themes.

Keep in mind: despite his contributions to psychology, Freud is a problematic figure. For one, his theories tend not to apply in most situations unless you happen to be Franz Kafka. For another, his consideration of women is suspect and his valuation of human sexuality equally dubious. I mean, sometimes a cigar really is just a cigar.

Catherine, as well, does possess a number of unfortunate incongruities which undermine both its symbolic depth and blemish some of its contribution to the creativity of videogame storytelling. Among the most frustrating points of the game is its primary conflict: Vincent is poised between choosing a life of excitement and instability, or settling for security and comfort. This is communicated via a morality meter, which swings one way or another, depending on Vincent’s answers to text messages or questions posed by Astaroth. These answers influence the story’s ultimate course.

But this strangles Vincent’s humanity by strict and sometimes confusing standards: Astaroth asks me to choose between communicating with my partner if there’s an issue, or holding it in and reinforcing my faith. I choose communication. This is somehow a metrically bad thing—and yet, most of the drama in Catherine only occurs because Vincent and Katherine refuse to air their true feelings to each other. The cognitive dissonance here makes for a strange evaluation of gender relations, as well as raises more questions: Why don’t we see women being punished for non-commitment or cheating? Are the two lead women in this game so binary because they represent Vincent’s psyche—or because they are poorly written? Why is everyone in this universe straight? Do gay people not exist in Catherine, or do they not count? While there are many same-sex families, surely there are gay men and women who do not want kids—or who have been unfaithful. Why are sex, love, and gender only demonstrated by one orientation in a game which offers a branching exploration of these issues?

One may argue that some of these frayed ends create an interesting polemic in the game, which they no doubt do. But I doubt that this was an entirely conscious effort. Rather, they make the game feel philosophically and morally incoherent in some places, disturbingly homophobic, misogynist—and sometimes misandrist—in others.

I tried to keep my meter fairly balanced, in the event I felt I could control it by predicting the outcome of the question. I didn’t see Vincent as entirely good or bad—rather, I saw him as a decent guy with some crippling insecurities. Thankfully, the game does seem to recognize this, not only in the implementation of multiple endings but in Vincent’s coming of age, realized in the game’s final quarter. Over half the game is dominated by the real-world rumor of a witch’s curse that is killing the men. But Catherine is not a witch; she is in fact a succubus. And she’s not even the brains of the operation. That role falls both to Astaroth and to the bar owner, a dapper older man subtly named Thomas Mutton—otherwise known as Dumuzid the Shepherd—who only reveals his, and Catherine’s, true identity when a suspicious Vincent presses him.

The demons’ plan is to kill off noncommittal males every hundred years or so in order to redistribute the women among men who will produce children. At the end of the final battle, Vincent finally confronts the Dumuzid, realizing that perhaps people are more complicated than the binary options the game itself proposes. Human beings cannot be herded or lumped into facile groups. Human morality cannot be judged as easily as by metrics. It was a rousing, refreshing speech whose message is ultimately betrayed by the very existence of Catherine’s moral dichotomy.

My version of Vincent rebuffed the vivacious she-demon, and was later rebuffed by his not-so-pregnant-after-all Katherine. To the game, this is a “bad ending.” To me, this is a “good ending.” Now perhaps he can find someone sane and balanced. Someone he can actually talk to.

For the sake of creativity alone, Catherine is worth the sore thumbs. For the strange application of psychoanalysis, Catherine is worth reflection. Like Freud, its take on gender, morality and sexuality, though ambitious, is disturbingly lacking and somewhat ludicrous—but it does build upon current representations of gender, sex and morals in videogames. And that’s worth reaching for.