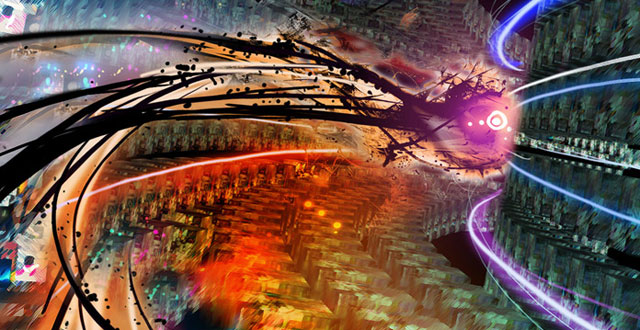 It begins with a wave of my hand, directing a glowing sphere to cause a flower to appear on the menu screen. Wave, hold, start: I’ve begun exploring the first “archive” of Child of Eden, the Matrix.

When people talk about games as being artistic, the essence of what they mean is story, whether narrative-based or user-created. Child of Eden resists this convention, thrusting the player into an almost completely abstract world of shapes, colors, and bewildering representations. Like a newly initiated soldier in a sudden revolution, I’m given a weapon I barely understand and told to fight for a cause that makes no sense to me: “Save Eden. Save Lumi.”

The scene is set in glorious fashion. I am sent barreling through a Tempest-style tunnel as its polygonal squares flash, ripple, and morph before my eyes. Creatures line up before me, clearly to be aimed and fired at. With my right hand, I mark them and make a flinging motion toward the screen, which sends up to eight bullets that never miss. With my left hand, I shoot a simple automatic weapon, the Tracer, which can miss, but also delivers a large stream of damage at once.

These are my only options, playing with Kinect, so I repeat the motions. I wave, flick, and repeat. I switch hands. I wave. I switch hands again. The motions alone, and the images on the screen, mean nothing. I am standing in my living room casting imaginary spells.

Between these two “weapons” (half the time they don’t destroy things so much as create, develop, or purify them), I have very little control over what is going on around me. This is noteworthy because in Child of Eden, there is a lot going on. Besides my constant traveling through various landscapes, I watch swimming whales, running men, blooming flowers, and generally abstract objects and shapes doing generally abstract things. They swoop onto the screen just long enough to hold my attention, several occupying the space at a time. While I might be tempted to follow the glimmering whale to his eventual end, the camera grows bored, and I follow the rail even further down the rabbit hole.

Playing Child of Eden is as beautiful and overwhelming as walking through an art museum in five minutes. The game’s advantage is to direct my attention, causing me to view the same images over and over.

Here’s something about this game: it is extremely hard. After failing the first and second “archives” several times, I realize that Child of Eden wasn’t meant to be finished in the first playthrough. I abandon the perfect performance, trusting that improvement will come with time. Instead, I stare at and study the surroundings. All is not made clear, but some things are: I am fighting for humankind; for our history, our evolution, our accomplishments, for progress, and for life. The actual details evaporate from the screen, and just as quickly from my mind. Playing Child of Eden is as beautiful and overwhelming as walking through an art museum in five minutes. The game’s advantage is to direct my attention, causing me to view the same images over and over.

We rightly recognize that the degree to which control is withheld in a videogame is the degree to which we are merely watching a film or a moving painting. Child of Eden limits our movement to a pre-planned route, and gives us little-to-no choice over how we impact the environment, the game’s chief character. It changes without us, and when we arrive in the midst of giant structures they pay us no mind except to unveil their weak spots. We expect to linger on these things and explore the world, but don’t have that option.

Unlike in other rail shooters, this feels like a freedom in Child of Eden. Instead of agonizing over which of the game’s sights we ought to take in, we have only our eyes and our hands—with these things we make our mark.

Child of Eden isn’t about the player, whose job is secondary to what they watch happen around them. Systems rise and fail, images flash and fall, lights flare and die out, and we can only wave, and flick. We must focus primarily on these two motions, making them tighter and more efficient, building up physical skill in our little corner of this world, and becoming more familiar with it in doing so.

These hands of mine aren’t much. My eyes can’t take in all there is at once. My right arm is sore from the constant motions required to save Eden. But there is clearly something bigger than me at stake: the fate of Lumi, of Eden, of the world, whatever this world is.

This is your goal in Child of Eden: to find fulfillment in submitting to the experience. You’ll find your score increasing, but this isn’t about making you feel powerful, crucial to the conflict, or incredibly smart. It’s about letting go of those pretensions and embracing your role as one very small person in a vast, confusing, and mysterious universe.