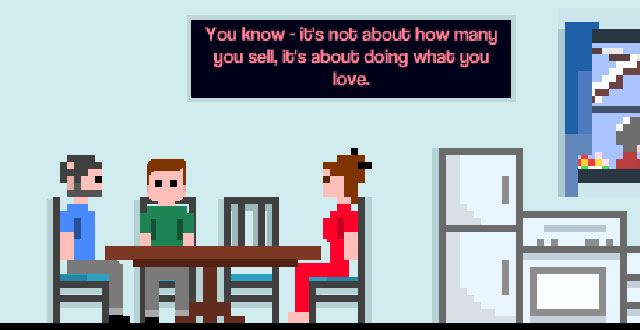 I hate my big brother. Granted, there’s not much to hate: he’s a mere 11 pixels, with five peach, three blue, two dark brown, and one light brown. But then he threatens to steal all of my toys. I pursue him; his teenage cognitive skills outperform my still-developing lizard brain, and he locks me in the attic. I’m only nine pixels, a tiny baby crawling on the ground, my one blue eye as big as my white diaper. Luckily my small stature allows easy passage through an attic vent. I appear in the basement, much to my brother’s surprise. He continues to tease me with a well-timed “Na na na na na.” I crawl after him, always one second too slow, as he marches on and gathers the rest of my playthings.

This is the first level in Convergence, a game developed by three 20-somethings in their spare time, available on Kongregate for free. The description calls it “a game about living life, making choices, and the world each person creates.” Each level comprises a set piece from a different age: you chase toys as a baby; you proofread work papers and dance with your wife as an adult. The arrow keys slide you left and right, while the spacebar is your context-sensitive action button. Heavily influenced by Jason Rohrer’s Passage and Gregory Weir’s How to Raise a Dragon, the game asks nothing of your mechanical prowess with a keyboard. Instead, the play experience relies on considering the moral implications of your actions and paying attention to clues in your environment. Ultimately, as an old man in the third and final level, you see the results of your choices.

These results are somewhat predictable. For example, at the end of the first level, after you’ve crawled into your bedroom and been forced to compare your feeble accumulation of toys with your brother’s, your mother asks you to join them on an errand. A text box appears: “You have a decision: do you follow your mother or disobey her and play with the toys?” Each object flashes, wooing you with separate rhythms; the mother pulses slowly, contentedly, while the toys brighten in quick, tam-tam beats.  My pixilated baby crawls back and forth, considering his options.

Choose Toys, and your need for material goods and instant gratification makes you a workaholic, leading you down a selfish path of divorce and regret.   Choose Mother, and your devotion to family lays the groundwork for a healthy marital relationship and warm meals shared with your son on a cold winter’s day.

This is a primitive version of the moral dilemmas and dialogue chains recently explored in Peter Molyneux’s Fable and refined in BioWare’s Western role-playing games like Mass Effect. But the simplicity of the cause-and-effect system that is in place doesn’t bother me. What is most compelling about the game is my own strange, fervent reaction to this simplicity. I realize the chase after toys is a futile exercise in power mongering. And yet I need them. The toys themselves are markers, placeholders—staid yellow squares, with not even a graphical flourish or exciting sound effect upon retrieval. They have no quality beyond what they say about the dark heart hidden behind that one peach pixel.

Yet I push my baby to its limits, urging him to catch up with that big brother whose only programmed behavior is to tease, to torment. It works. I miss a toy and reload the page, restarting the game. This time I turn left instead of right; a hidden vent deposits me in front of the brother, placing me on a table next to the first toy. A-ha! I’m in the lead. He’s chasing after me now. He still locks me in the attic but I don’t care; the closed door allows me to reach another golden square! I push forward. Eventually I arrive in the bedroom, eight toys to his measly two. “How did you get more toys than me…” he wonders. The dejection in his text tastes like blood to a hungry mongrel.

Decision time: Toys or Mother? I chose Toys, wishing to stay with my bounty. Mother berates me: “Sweetie, you’re ALWAYS playing with your toys.” Later, in one of the final level scenarios, your now-grown son will come home for dinner. He’s a game developer, and is working on his next title. There’s a text-bubble quip about the follow-up having things the first didn’t, like gameplay and good graphics. I can’t help but feel that too much of the content in Convergence is a trio of young men’s apologies: to their nascent fans, seeing their work for the first time; and to their real-life parents who cast doubt on their sons’ futures, watching as they spent all that time staring at screens, playing with their toys.

But the simplicity of the cause-and-effect system that is in place doesn’t bother me. What is most compelling about the game is my own strange, fervent reaction to this simplicity.

The second level combines office drudgery with an inevitable date with your wife. A horizontal bar on the bottom of the screen, bisected into Work and Love, gauges your performance. Photocopy those papers and your Work level increases. Skip out early and remember your wife Melissa’s favorite ice-cream flavor, and Love bumps up considerably.

The embellished stick figures of Convergence recall a child rehearsing her future with paper dolls. The largest impediment to the creators’ stated purpose is the odd inclusion of achievements. In a game purporting to be about “living life,” the dangling carrot of plaques awarded for doing arbitrary deeds feels out of place. Then again, perhaps that’s all much of life is. Put your 50 years in, get your gold watch. The dwindling of social security will put a crimp in this equation. But that’s a chat for another console generation.

This playthrough, I choose Work. When the third and final level begins, I’m standing outside in the snow, my hair gray and patchy. I walk up to a man outside a house. I tell him Melissa’s will is in place. He thanks me and goes inside, wanting to spend their last remaining hours together by her bedside. My loyalty to a faceless employer did not go over well with the missus; she’s now married to someone else, and I’m a lawyer. I drive away in a red sports car, alone but surrounded by the fruits of my labor. That’s the thing about fruit. Eventually, it always rots.

The lads at Streetlight Studios have a wide-ranging pedigree. Combined, their bachelor’s degrees encompass biology, psychology, economics, and computational neuroscience. Still, they have much to learn: about relationships, about real-world office politics, about where to go on a Date Night once passion has yielded to time and routine. Then again, so do I. Convergence, formed by the barest of pretenses, directed by the most transparent of motives, still squeezed out genuine response from a cautious and skeptical player.

If anything, the morality play enacted here, cardboard-stiff as it may be, is a good reminder of life’s hidden simplicity. It’s really not as complicated as it seems. Boil down the events of your day, and you’ll find four simple choices. Toys, People, Work, Love. Choose wisely.