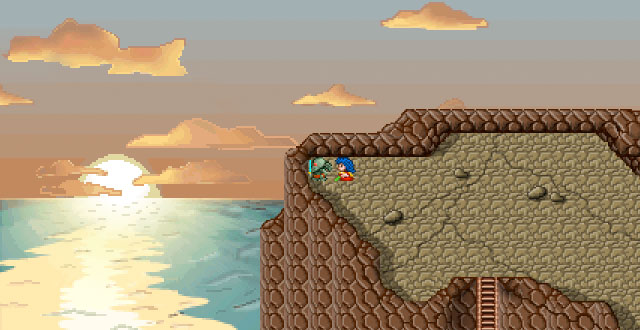 The fourth wall is broken less than a minute into Cthulhu Saves the World. Turns out H. P. Lovecraft’s ancient squid-faced god of darkness has been eavesdropping as the narrator was explaining the plot. A mysterious wizard has drained his evil energies, and to restore them, Cthulhu will have to become a true hero—saving the world so that he can destroy it. “Foolish narrator!” Cthulhu cries. “Now, I too know the way to regain my power!”

And so the parodic tone is set for Zeboyd Games’ whimsical homage to 16-bit role-playing games. Backed by a pitch-perfect MIDI soundtrack, Cthulhu—recast here as a lovably pompous green sprite—sets out on his quest. If you’ve played an early Dragon Quest or Final Fantasy game, you know what you’re in for. All the familiar tropes are here: the colorful top-down maps, the ragtag party of adventurers, the dungeon-crawling for experience points and loot, the random encounters with palette-swapped monsters, the challenging boss fights. The game has more than nostalgia for the bygone era of blocky fantasy games, though. There’s also a winking reverence for their relentlessly linear progression and mechanical turn-based combat.

But in his recreation of the early-’90s RPG formula, designer Robert Boyd throws in a few interesting variables. Enemies gain 10 percent more strength for every round of battle they survive, giving you an incentive to finish them off quickly. Pairs of party members can “unite” to unleash powerful buffs or attacks, lending a satisfying tactical layer to combat.

GAH, PITIFUL HUMAN REVIEWER! I, CTHULHU, MASTER OF R’LYEH, HAVE AWAKENED FROM MY AEONS-LONG SLUMBER TO CORRECT THE MANY ERRORS AND OMISSIONS YOU WILL NO DOUBT COMMIT IN THESE LINES!

REALLY! FOR INSTANCE, WHAT’S WITH THIS “LOVABLE” CRAP? I’M THE DEMON SPAWN OF THE STARS, FOR CRYING OUT LOUD.

Well, the retro art style is kind of adorable—

AND WHY HAVEN’T YOU EXPLAINED HOW I CAN AFFLICT MY ENEMIES WITH INSANITY, MAKING THEM MORE VULNERABLE TO MY TERRIFYING MIGHT? OR HOW SUCCESSFUL HITS BUILD MY COMBO COUNTER, INCREASING THE DEVASTATION OF MY FEARSOME ATTACKS?

I was getting to that! Don’t get your tentacles in a knot.

Look, let’s talk about the modern conveniences Zeboyd adds to offset the requisite RPG tedium. Each area features a set amount of random encounters with enemies, after which they shut off, unless you choose to level up your party with more monster-slaying. Full health and partial mana are restored to every party member after each victory; if your party is defeated, you can simply use a “1UP” to restart the encounter. You can also save your game at any time—a feature that prompts Cthulhu to remark, “What is this, a first-person shooter?”

BWAHAHA! THAT WAS A GOOD ONE! I KILL ME SOMETIMES.

It’s in these moments of parody where Cthulhu Saves the World shines. While Lovecraft fans will get a kick out of exploring the zombified village of Dunwich and battling the Outer God Nyarlathotep, the game’s real audience is retro RPG fans with a sense of humor—players who still harbor fondness for the tongue-in-cheek ethic of EarthBound. As in that 1994 classic, loot and leveling up are not the true rewards here, but rather seeing the developer poke fun at genre conventions. Being able to parody its ancestors, not its contemporaries, makes the game’s humor all the more irreverent.

HOLD ON. RPG FANS? WHAT ABOUT MY FANS? I HAVE MY OWN CULT, YOU KNOW.

Yeah, I’ve heard. Anyway, problem is, the joke goes on a little too long. Like the games from which it takes its cues, Cthulhu Saves the World suffers from bloating: The dungeon maps can get twisting and monotonous, and the frustration of inadvertently going in circles is exacerbated by the resulting additional battles. Despite the creative additions to the formula, there’s a lot of foot-tappingly repetitive combat to wade through before you can be rewarded with more hilarity. In a way, though, that’s entirely appropriate: What classic RPG doesn’t follow the same pattern?

WELL, THERE WAS A LINK TO THE PAST, AND—

Seriously? You are terrible.