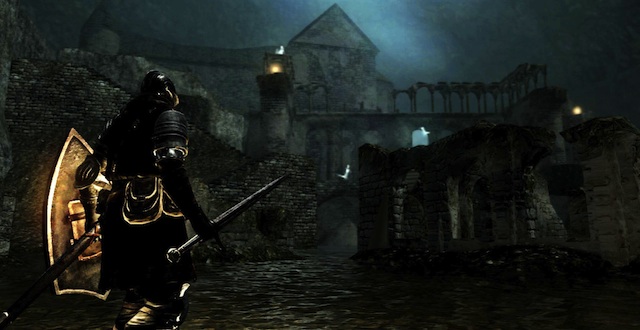 It’s fair to say that Dark Souls has consumed me. I often catch myself thinking about it; usually when I should be thinking about something else. Should I be concerned with crossbows? Should I invest experience points in magic, despite the fact that my character is a brawny Warrior, whose armor clangs heavily with each step, and who one-hands a sword the length of his body?

Should I flee into the forest, past the abomination whose head has been lopped off and sealed with arcane symbols, and who crawls around on one arm, one leg, and its tail? Should I return to the hauntingly beautiful medieval castle and slay the undead? Questions like these occupy me, even when I’m not playing the game. They come when I’m at dinner with my family, and my brother-in-law is going on about his job, or when I’m on the phone with my girlfriend, or brushing my teeth.

“Consume” is a funny little word. In a figurative sense, it simply means to be engrossed. Literally, its meaning is more ambiguous. On one hand, it calls to mind images of tuberculosis camps and burning buildings. On the other, it implies a feeling of achievement. It’s easy to imagine a king and his men consuming a feast after a fierce victory on the battlefield. And according to the values of consumerism, the person with the most stuff wins.

The confusion over consuming comes from a Middle Age mixup, in which two similarly spelled Latin words were brought into English—both written as “consume.” One meant to squander and waste. The other—which also gave us the word consummate, the sexual act required to complete a marriage—meant to accomplish. The latter usage has become obsolete, but the idea is still tangled up in consuming. Both aspects can be seen in Dark Souls.

If you listen to people talk about Dark Souls, or its predecessor Demon’s Souls, you’ll hear two stories: They beat you down; and they give you a semi-magical feeling of accomplishment. Both are true. The game is relentlessly cruel. Its nature is to consume you—that is, to devour you and reduce you to invisible substance. The ghosts of explorers (who are actually other players viewed over the internet) drift in and out of crumbled Roman architecture and spiraling stairwells. You see glimpses of them lashing at unseen foes—and being viciously killed. But Dark Souls is also about consuming. It’s about harvesting the souls of hellish dogs and heavily armored knights, then using them to become powerful.

At times, this feels like you are trying to gain absolution by being burnt at the stake. Consider the game’s concept of souls. Souls are currency in this ghostly place, a sort of experience point, and are typically gained by killing inhabitants. They can be spent on upgrading weapons and armor; buying arrows and firebombs; and, most importantly, leveling up your character. You consume them in the most positive way. However, when you die (Oh! How you will die), these invaluable souls are ripped from you. That next level, which you were working so hard to reach, is lost. Your ambitions are thwarted when an errant spearhead is stabbed in your gut.

Mercifully, you are given a second chance. You can reclaim your souls by returning to the spot where you died. You’ll die once or twice (or 20 times!) at the hands of a bullish demon near the start of the game. But as long as you go back and grab the souls that you lost there, you’re making progress. They will add up to a huge payoff—if you can escape alive.

This traps you in a painful cycle, in which you are lured back to the place where you were brutally slaughtered. An hour’s worth of progress is held hostage by an ill-tempered bull-demon. Beware! He carries a giant, hammer-like ax that is fine for crushing in your helmet; and if you get whacked again before retrieving your precious souls, they are lost for good. Their fate hangs in the balance. Will they be consumed purposely, or consumed by death?

Lying there, I suddenly knew: I would murder the knight—one of the few souls who had befriended me.

Quite often, you will be utterly defeated. In exasperation, you may turn to the classic technique of grinding. This relic is often cursed as the bane of modern game design. What could be more archaic than spending time killing the same set of bloodthirsty enemies over and over again: as if you were flogging yourself nightly to obtain moral fortitude?  And yet, it feels like a huge relief here. You are grateful for it, because you are so desperately weak.

Gradually, your frail character becomes skillful, and your flimsy scimitar can be tempered into a force to be reckoned with. But each upgrade costs a bit more than the last. One thousand souls are priceless at first, but their value depreciates quickly. Before long, grinding on Hollow Soldiers becomes ineffective, pushing you down the stairs that lead to the swamp, where demons weep in misery and swift, freakish wraiths hover across the water, wielding daggers.

The game giveth and taketh away in one motion. Its duality shows up in obvious places, such as your character’s left and right hands. The Black Knight’s sword can run through the grotesque and eyeless Dead in a single swipe; but it is devilishly tricky to swing. Its drawn-out, inexact motion leaves you open to quick, precise, and deadly jabs to your chest. Even weakly rats and defenseless sewer blobs can make short work of you if you let your guard down. It is tempting to overburden yourself with a hefty shield and heavy metal gauntlets, but doing so traps you under their weight. Your means of protection become a prison.

The online system is both a blessing and a curse. Though Dark Souls is a solitary experience, other players can briefly join in to help you overcome an unmanageable dragon or merciless golem, as if sent from heaven. But the door also leads to hell. It is open to vile raiders, who will hunt you down, chop you into pieces, and steal your souls when you least expect it. Similarly, others can write messages that show up in your game, but their advice can be truthful, or a lie. It may lead into a deathtrap, where a den of thieves will jump on you from all sides, gash you with knives, and watch you bleed to death.

Dark Souls constantly stabs you in the back as it extends a helping hand. It’s brutal, but this is the key to its brilliance. The punishing difficulty instills savagery in this morbid place. Anything here can kill you. A foreboding mood hangs over the catacombs as you skulk into the darkness, or run like hell from the stone knights who sleep in the forest. The game lures you into the dark with promises of unclaimed souls, tougher armor, and the stat boosts you need to wield a massive axe. If you go deep enough, you will find a campfire where you can rest and refill your flasks. But of course, there’s a catch. Doing so causes those you have killed to come back to life. This place is formed out of a fear of annihilation and the desire for conquest. You become … consumed by it.

It was 8:30 in the morning, and I felt miserable. I had stayed up until sunrise playing Dark Souls. I only slept a few hours.

I had been dreaming that my avatar was running through the castle and killing snakes. I rolled over in bed and tried to go back to sleep. It wasn’t happening. I tossed and turned restlessly, the way I do when I’m thinking about death, or contemplating a life-changing dilemma. I was thinking about the game.

I had been stuck fighting the two massive gargoyles that guard the bell tower. They had killed me repeatedly, and I didn’t see any way of winning. My mind shifted through the possibilities. I needed better armor. But where would I get it? Lying there, I suddenly knew: I would murder the knight—one of the few souls who had befriended me.

Later that day, once I had gotten my obligations out of the way, I turned on the game. I immediately went for him, only hesitating to check that my equipment was in order. I didn’t know how strong he would be. I walked over to him, making sure that I’d get in a good first strike, and swung. The fight that ensued was intense. I lunged and missed. He struck my side. I stabbed back. My heart fluttering darkly, I hit him with a fatal swing, and he slumped to the ground. His shield and armor were mine.

Soon after, the gargoyles fell. I climbed the tower. I rang the first bell. The sunlight was beaming as I looked out over the forest and the castle. For once, I felt like I might be able to finish the game. As I came down the stairs, a priest was waiting and offered me praise. The bell chimed harmoniously above.