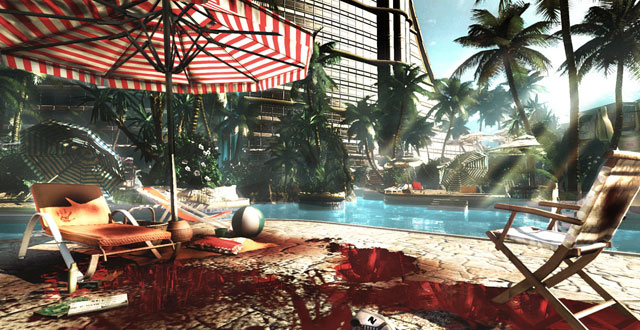 The psychology of fear is an incessantly absorbing topic. In the film and videogame industries, more is more and, well, less is less. But the true high-water marks of horror tell a more nuanced and personal story than a hewed limb spurting a small cascade’s worth of blood. What scared us most about Frankenstein, The Wolfman, It, The Shining, and Dracula was that any of our friends or loved ones could fall prey to the monsters—or that they could become those monsters. That was the case in the zombie apocalypse films made by George Romero.

Instead of the gratuitous violence of postmodern splatter/torture-porn films such as Saw, Hostel, and The Human Centipede, Romero’s best movies made you imagine the worst situations. His vacant roadsides, abandoned farmhouses, and fluorescent shopping malls were tabula rasas for viewers to fill up with their own fears. Techland and Deep Silver’s horror role-playing game Dead Island is well made and practiced, but would be much better if it had such an emotional tug. There is blood everywhere in this game, but I only seldom feel like a heart has pumped it.

The infamous Dead Island trailer lived up to Romero’s best films. Essentially a short film (contracted to UK-based Axis Animation and Audiomotion), it depicts the sentiments of a man named Mike Jennings protecting his family in a zombie-infested hotel. It has stakes, thanks to the music, the framing, and the empathy shown to the actions onscreen. A child turning into a slobbering killer always helps, too.

Meanwhile, the game’s moaning slabs of putrefied flesh—and the characters that butcher them—sometimes feel like they’re only in place to acquiesce to an insatiable need for role-playing customization. The best monsters are memorable in the way Frankenstein’s monster is memorable: they lurk around shadows.

One of my most memorable encounters with the common, slow-moving “Walker” zombie occurs while traipsing through one of Royal Palms Resort’s umbrella-filled poolsides. As I slash a few of the suckers, the bright blue water turns a dark, shocking crimson. The “Thug,” a giant enemy that resembles Nemesis from Resident Evil 3, always seems to corner me in a dimly lit parking garage or claustrophobic hut. As in Dead Space, it’s best to try to break some bones or sever some limbs before moving in for the kill. The character modeling constantly brings to mind that the fiends wreaking havoc on this tropical paradise were once regular Joes and Jills sipping daiquiris on the beach. And the cognitive dissonance involved with bashing in a bikini babe’s skull with a baseball bat is bone-chilling in its guttural simplicity.

There is blood everywhere in this game, but I only seldom feel like a heart has pumped it.

But while there can be a cold joy in beefing up your character’s Fury, Combat, and Survival skill trees, the endless customization detracts from the horror of the game. The terror ebbs from the outright thrill of running from freaks in a pitch-black tunnel to listless item collecting, upgrading, and repairing. It’s akin to periodically whipping out a calculator while being stalked. Tweaking a Flimsy Level 4 Pipe or Spiteful Pistol is silly “gamification” where a tactile, first-person zombie game would have sufficed. And when you’re wandering down an empty field in search of a downed aircraft or powering up a lighthouse field station, the colorful hit-point numbers cascading off the bikini- and boardshort-wearing monsters remind you that you’re playing the game—not clinging on to your life.

As I stand atop a battered rent-a-cop-truck fending off infected vacationers in Dead Island, I feel a tang of Romero’s best films, which achieved fear through the unpredictability of a situation where your sibling, significant other, or child could become infected. Staring at a skill-tree screen should be minimal in a horror game, but I have too often toiled in front of a workbench caring for weapons, since they rapidly degrade.

In well-lit safe zones, ciphers give me fetch quests. Some insert an emotional pull, but most just ram the lumbering narrative forward. At least they sound kind of desperate. These are the reminders of a game world’s confines. The pre-release expectations for Dead Island were altogether more cerebral, nuanced, and most of all, emotional.

During Dead Island, the trailer’s main protagonist, Mike Jennings, is found dead by one of the game’s main characters, a one-hit wonder New Orleans rapper named Sam B. It’s one of Dead Island’s rare glimpses into the reflective world of true horror. George Romero perfected this with films such as Night of the Living Dead and Dawn of the Dead. And in true Romero fashion, Jennings committed suicide by killing himself with a fire axe. You don’t get the full story, but you feel the wet thud of its impact.

Jennings’ blood-splattered end is emblematic of our imagined fears, because human emotion sharpened the blow. He’s not just a slaughtered figure on the screen, but a mirror unto our veiled fears. Dead Island allays these primitive, hypothalamus-tickling responses through acclimation and stilted RPG tropes. Such game devices are barren vessels with little fear lurking within their gloom.