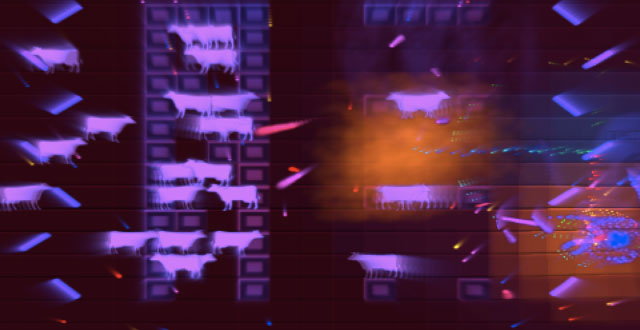 Though frequented by camels, sheep, and other docile creatures, Jeff Minter’s games have a reputation for being ferocious. Gridrunner++ was blistering. Space Giraffe, drenched in psychedelia, was overwhelming. And Minotaur Rescue was hard to tame. Unraveling the fray amidst bleating ruminants and queasy camp can feel like tackling an ancient Kabbalist text, yet to the illuminati who can interpret Minter’s unconventional means, these games are awe-inspiring. Never has this been truer than for the mystifying Deflex, a musical puzzler with a touch of synesthesia that could be Minter’s swan song, if anyone believed he’d stop making games after doing it for 30 years.

A typical discussion of Deflex involves admissions of bewilderment, a diagram or two, and several mispronunciations of its name. (Is it Deflux, Deflect, Reflux?) The seemingly intuitive task of guiding a puck through empty space, while scooping up cherries and, well, plastic ponies à la Pac-Man, is anything but. The trick is to bounce the puck off reflectors instead of pushing left to go left, and vice-versa. At first, this was confusing. Then, dizzying. Then, I read a tutorial on Minter’s blog. The concept still isn’t transparent, but as I made strides toward wrapping my head around this warped way of thinking, a once-vexing game bloomed into a novel, engrossing, and outright genius work of programming.

The controls seem convoluted, a Rube Goldbergian method of getting around, but the payoff is being enlightened to geometry, instead of merely pushing up pixels. If the prospect of unearthing Platonic forms doesn’t excite you, perhaps you’ll be enchanted by the soothing classical piano soundtrack, which plinks and chimes in tune with your performance. The chords fall in harmony as you discover clear solutions—and in discord when you don’t. While the game sounds like a Franz Liszt composition, the abrupt, creative U-turns play like a Faust album in silicon. Developer Llamasoft taps its long history, and its library of goat noises, to reflect on a spectrum of classic game design.

The motif nods to bygone arcades and old-world computing, tipping its hat to well-worn floppies of Asteroids and Wizard of Wor, but Deflex compares more directly to a collection of curios: Nintendo’s Clu Clu Land, Toshio Iwai’s Electroplankton, and Treasure’s Bangai-O Spirits. Of all, the Treasure connection is most apt. Bangai-O Spirits exploded in so many different directions that it transcended being a shooter and became a celebration of play. Deflex carries the same aura. At times, it feels like a logic puzzle, a quarter muncher, a mysterious and profoundly beautiful art game, and a music-creation tool. Alas, it also shares Bangai-O’s less-desirable characteristics. It’s riddled with complexity, so that only the most devout students can know its joy.