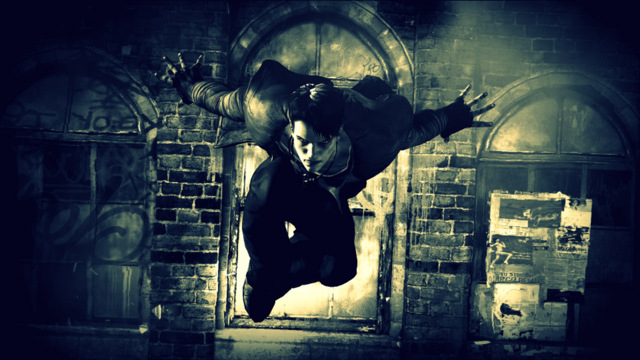 A lot of gaming websites, borrowing from a tradition set by their gadget-friendly brethren in tech journalism, split their reviews of videogames into discrete chunks to make them more digestible. Simplifying the critical process often makes the actual process of writing a game review easier, but it also abandons the question of comprehensive synthesis. It’s hard to say how, exactly, a game makes you feel when you’re giving it a “10” for graphics and a “3” for story.

Maybe it’s a dearth of critical faculties, but one category that I’ve added to my reviewing matrix in recent months is: how would I feel if my roommate walked in on me playing this? Actually, I probably ask myself that a lot because I recently got a new roommate that knows absolutely nothing about videogames and is therefore constantly perplexed by the events unfolding on screen when I’m “working” from home.

To the uninitiated, after all, videogames can be really weird.

In recent memory, there’s no better example of this incommunicability than the DMC: Devil May Cry, the reboot of a popular series of Japanese beat ‘em up games. Since the original Devil May Cry first appeared in 2001, the series has essentially been about a white-haired guy named Dante killing lots of bad guys in the most stylish way possible. The games were also phenomenally difficult, so those that could actually pull off Dante’s most acrobatic strings of break-dance fighting were recognized as the true gamers. And after a five-year gap between 2008’s Devil May Cry 4 and the reimagined DMC, I’ve heard two main questions from from friends familiar with the series.

To the uninitiated, after all, videogames can be really weird.

First, why is Dante’s hair no longer white?

DMC left me with a more basic question: why was I too embarrassed to play this game in front of other people? Or, to put it another way: why did I have to fight a giant burping fetus in the most spectacularly Freudian boss battle I’ve ever experienced?

I heard the lock click in the door of my apartment last week just as I finished a particularly tricky level in the new DMC: Devil May Cry. The screen faded into a scene of Mundus (the main bad guy, a sort of combination of Gordon Gekko from Wall Street and Diablo from the, um, Diablo trilogy) pushing his girlfriend’s face against his desk to make the beast with two backs. I never saw how their moment of passion ended because once I heard the door slide open and saw Mundus screw his face up in an expression of angst-ridden horniness, I turned the TV off.

To DMC developer Ninja Theory’s credit, there may be more to that scene than some funny-looking, polygonal sex. The game opens with Mundus blackmailing the President of the United States out of several trillion dollars, a spectacular bit of villainy to which his girlfriend can only respond: “The world is, at last, your bitch, as am I. Nothing left but to grab it by the hair, bend it over, and…”

But I digress. Games aren’t supposed to be about story anyways, right? Who cares if you’re fighting a giant talking fetus or an anthropomorphized turtle in light BDSM gear, games should just be fun. And, well, DMC is a lot of fun. The combat feels tense and tightly framed, forcing you to master increasingly complex moves just as the game makes it trickier to actually pull them off with tough and agile enemies. Weapons are color coded (fire, ice, and…sword?) to match with different bad guys and pieces of the environment, forcing you to constantly adjust your tactics. Suffice to say, the game keeps you on your feet.

Maybe the fact that, several hours later, the only thing Mundus can grab by the hair and bend over is that same girlfriend is meant to illustrate just how profound his fall from grace is. But subtlety isn’t something that comes easily to Devil May Cry, as epitomized by the protagonist Dante himself, who interrupts Mundus’s making-the-whole-world-his-bitch moment so that Ninja Theory can show him having sex with a handful of strippers dressed in sexy angel costumes. The next morning, he’s woken up by a woman telling him that some demons are coming to kill him. So, naturally, he walks to the door of his trailer butt naked just to let his new friend and (spoiler alert) love interest pause for a moment to marvel at the glory of his unwashed and sexy angel stripper-encrusted junk.

What’s most disquieting about DMC’s ubiquitous sexual frustration is that its endless hypersexual references have almost nothing to do with the gameplay.

What’s most disquieting about DMC’s ubiquitous sexual frustration is that its endless hypersexual references have almost nothing to do with the gameplay of the new and (arguably) improved Devil May Cry. Because when it comes to actually playing DMC, it’s a lot of fun. Everything else, however, is mired in the adolescence of dick jokes and vague political paranoia.

You could say that this is all self-aware, self-referential humor about the excesses of videogames. But I think this retreat to irony has more to do with our own growing discomfort with playing games that we’re too embarrassed to be seen in public with. When you’d rather turn something off than explain to your roommate what the hell you’re doing, there’s something to be said for earnestness or maturity. Art doesn’t have to answer to everybody, sure. But it has to be able to speak to somebody. And isn’t there a better spokesperson than some evil dude who’s basically trying to put the whole world into a sexual position Meek Mill loves to rap about?

Videogames just sort of officially became art according to some people working at fancy museums. So with that in mind, let me put it this way: how many works of art have you experienced that involved fighting a gigantic inverted demon fetus while its mother dangles off its belly button screaming “suck me back in, baby!” Because, of course, the dangly uvula-like mom is the weak spot in an epic boss battle against her engorged unborn fetus.

My roommate didn’t walk in during my encounter with the giant fetus. But thank god that she didn’t. Because, if she did, I imagine that it would have sparked something just as weird and melodramatic as her walking in on me, say, toying around with some next-generation cyberdildonics.

The next day when I was finally done with Devil May Cry, she came over and sat on the couch with a friend when I was downloading some press materials for Dead Space 3.

“Oh, that’s Dead Space,” I responded, wondering what else I could possibly say to offer some human context to a bunch of screenshots of a man in a silver space suit tearing apart screaming zombies with a futuristic sawblade.

“It’s a really important series of horror games,” I added, “mostly because of its innovative take on targeted dismemberment of your enemies.”

They didn’t stay to watch me play that one either.