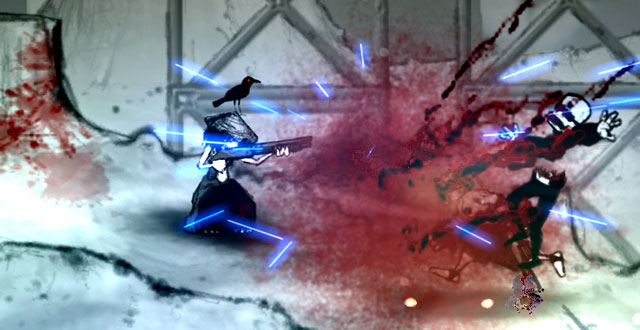 I Was A Cyborg Ninja Assassin.
My Mission Was To Kill The Dishwasher.

If I hadn’t just massacred a small army in one long fluid swoop of animalistic brutality, I’d have snickered at those lines. I’d have rolled my eyes at The Dishwasher: Vampire Smile’s emo gore-worship. I would have complained that combat is a repetitive exercise in slaying ninjas. But I relished in these facets and pressed on, twirling through sumi-e stained shards of industrial ruin.

In many ways, Vampire Smile is the videogame equivalent of grindhouse. The mood is constructed of cheap thrills: button mashing, gratuitous violence, and money shots at the push of a button. Even the act of moving streaks the screen in blood. James Silva, the mastermind behind the carnage, has taken the tricks developers use to appeal to a hardcore audience, and pushed them to the brink. The game is bloody as hell. Naturally, a dark, post-apocalyptic setting is employed. The story is edgy to the point of incoherence. And combat ranks among the twitchiest, seated alongside Devil May Cry and God Hand. Yet unlike these games, Vampire Smile doesn’t require much skill. It’s as if Silva’s intent was to take videogames’ worst habits and exploit them. In doing so, he makes an undeniable statement. Games don’t need fewer cheap thrills. They need more.

As I play, I’m frequently ambushed by goons—cut-rate thugs who look like caricatures of the type who’d hang out at the Chatsubo in Chiba City. Their sole purpose is to serve as a fresh stock of bodies to wail on. I’ve been given a sword, a chainsaw, a giant pair of scissors, an oversized hypodermic needle, a pair of meat cleavers, a machine gun, and a very long list of moves, which I link into an assault that fuses the routine of a hack-and-slash with the ecstatic possession of a voodoo dance. I plunge into similar-looking bloodbaths, killing the same animations of hitmen a thousand times over. Repetition works in the game’s favor. The attacks are so over-the-top, so easy to pull off, and so versatile that combat becomes entrancing.

We call it play, but our options in a videogame are generally so narrow that it feels more like being dominated.

On cue, I’m jumped by a group of mercenaries. Big mistake. I choose an easy target and dice him up real fast. I grab the nearest body. We launch into the air. I perform a spinning piledriver on it. The impact carries me upward. I redirect in midair, slice through android rubber, and finish it off with my machine gun. Another piledriver. Then I rain down on the corpse with my chainsaw-arm. I spin and sever a torso from its body.

This may look like a mindless act of violence. But to me, it’s a dance. My mind is acute, racing as it exchanges impulses with an arabesque of binary digits, which lies beneath the maya of a hundred goons being slaughtered in grotesque fashion. Most games hide behind their illusion, but before it ends, Vampire Smile starts to pull back the curtain. By that time, I had already ripped a gapping hole through it, exposing a frantic interplay in the synapse between player and machine.

Vampire Smile’s plot is initially ludicrous—my protagonist is a psychopath who believes she is ravaging an evil corporate empire while actually murdering her caretakers at the ward—but winds up commenting on the nature of play. As do the ironic Guitar Hero-style mini-games that contrast the fluidity of combat. They pose the question: Why do we like games in the first place?

We call it play, but our options in a videogame are generally so narrow that it feels more like being dominated. A cold and mechanical algorithm looms over us, and all we can do is push left, right, B, or A. We walk in a straight line with chains on our feet, even when we choose the direction. To be fair, Vampire Smile is also a straight line, but it lets me dance along the way. For once, the game submits to me. Fighting is loose and liberating. I can move anywhere on the screen I want. The only time I’m asked to play Simon with the bad guys—the matching game of well-timed blocks and attacks that most fighters rely on—is when I tap X to cut their heads off. I’m given control over a vast, intricate meat grinder, and all the program can do is throw more meat at it and hope a bone gets caught in the bearings.

I feel like I’m spamming: lashing out wildly in an inexact combination of button presses. I rap on the controller and flick the dash-move compulsively. But the game compresses and folds my flails into lethal form. My gestures fall into patterns. Not punch, punch, punch, kick, throw; but beautiful abstract patterns like those found on Moroccan tile and Afghan rugs. Long, vibrant patterns, defined as much by their artistic expression as they are by their symmetry, unfurl. This is how Ryu Hayabusa moves in his dreams.

I scan for the next body, catching it with my chainsaw. I wall-jump, stab a bio-mutant, parry an ill-considered rush with the blade of my scissors, back-flip, unload a round of ammo from my clip, slam three levitating droids to the ground, strike a goon in the face, then flip down to finish off the few stragglers, pounding their skulls against the floor and eviscerating them with head-butts.

Occasionally, I run up against giant bioengineered freaks and machines that look like ED-209 from RoboCop, but the song never misses a beat: the swish of metal through air, the quiet whoosh of a lunge evaded, the whirling thud of driving a robotic samurai into the concrete. And the rhythmic pleasure of these moves culminating in a satisfying payload: 540 billion points!