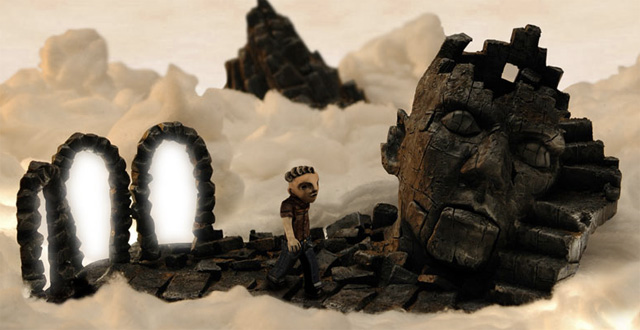 “SURREALISM, n. Psychic automatism in its pure state, by which one proposes to express—verbally, by means of the written word, or in any other manner—the actual functioning of thought. Dictated by the thought, in the absence of any control exercised by reason, exempt from any aesthetic or moral concern.” —André Breton

Cult adventure game The Neverhood is remembered for its dreamlike world, but not its sliding-tile puzzles. Its marriage of point-and-click puzzles and surreal imagery was, by definition, absurd. Surrealism is an expression of the illogical. Adventure games are logical to a fault. Something had to give.

The Dream Machine is another adventure game that falls short of unifying the conscious and unconscious minds. On one hand, the game is a series of mental tasks. I’m given a circuit board to repair, or asked to place books on a shelf in a certain order. But these analytical exercises are waypoints through a narrative thread that thrives on madness.

The result feels disjointed. Consciously, I collect items, match them with places, and piece together the story. Subconsciously, I feel a bit paranoid. I’m fascinated. I’m disturbed, but not as disturbed as I should be: I have this rational process to cling to, like a string winding through the Minotaur’s labyrinth.

A fairly accurate litmus test for surreality is what’s being eaten. In the film Naked Lunch, Bill Lee feeds poison to his typewriter, which has transmogrified into a talking cockroach. In Eraserhead, the entrée bleeds from its cavity as if suffering a miscarriage. The introductory puzzles in The Dream Machine also revolve around eating, but in contrast, the menu is appetizing.

The lead character dreams he is stranded on a deserted island. He catches a fish and eats it. He could have eaten something unsettling and more surreal: dismembered plastic dolls, his own clothes, or any number of metal utensils (all which have been deemed fit for consumption in Jan Švankmajer’s shorts Jabberwocky, Food, and Dimensions of Dialogue). He doesn’t. He eats a fish because it makes sense in the context of a puzzle. I know I can catch a fish with a fishing pole, and I can cook the fish over a fire. Dolls, on the other hand…

Even as its fiction bends and breaks reality, The Dream Machine is reluctant to stop making sense. Every twist has an explanation. Those mysterious stone heads spilled across the dreamscape—they are embodiments of the landlord’s primogenital ancestors. That creepy-looking machine—it will kill everyone in the apartment unless it’s shut off.

Such specifics detract from surrealism. When we look at a Salvador Dalí painting, we don’t demand to know why the clocks are melting. Surrealism disrupts logical thought. The movement fought against what it saw as a sinister force: the gradual reshaping of the psyche into a machine-like algorithm that interprets life as a series of facts and reasons.

In his Surrealist Manifesto, André Breton, the father of surrealism, laments, “This imagination which knows no bounds is henceforth allowed to be exercised only in strict accordance with the laws of an arbitrary utility.” If I didn’t know better, I’d think he was critiquing adventure games. Rigid procession is the genre’s defining characteristic, and its tragic flaw.

Breton’s Manifesto isn’t entirely lost on The Dream Machine. The game fosters an undercurrent of fear, a sense of fascination, and a penchant for the bizarre. But Breton’s call to overthrow rationality goes unanswered. As a result, emotions are doled out rationally. I get a tingle here, a chill there. But, eventually, my nerves are numbed by procedure.

The Dream Machine gets the look and feel right. It’s filmed in an unsettling stop-motion technique favored by surrealist filmmakers like Švankmajer and the Quay Brothers. It contains strangely constructed machines and busts of decrepit Baltic men. The collective unconscious is central to the story. But underneath these superficialities is a line of logic running in the opposite direction.