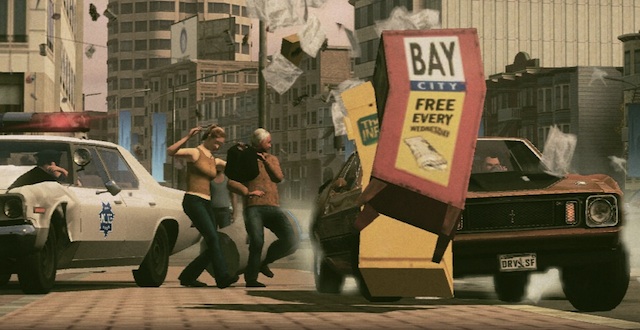 Take it from someone who totaled two cars before he could legally drink: the most terrifying part of getting into a car accident is not the impact. It’s the moment before, when you see the car barreling towards you and you get a sense of your own powerlessness. You know what’s about to happen, and you now have a second or two to reflect. This is usually the part where you scream.

Contact, though, is a breeze. Time slows down. You feel like you’re looking down from above, watching this happen to somebody else. That split-second of suspended reality is the closest to Nirvana you’ll ever feel. Then the airbag pops you in the chest, and you scream again.

In Driver: San Francisco, the point of pre-crash Zen is isolated and blown up: you can wreck whichever car you’d like, then engage in the exact out-of-body sensation you experience in a real-life crash—only to pop into someone else’s car and drive away as if nothing ever happened.

In a game offering you the opportunity to jump bodies, it’s Tanner’s moments of rudeness that remind you that you’re still stuck inside one guy’s head.

As far as having a title that explains exactly what’s going on in a game, you could do a whole lot worse than Driver: San Francisco. It’s a game about driving. In San Francisco. You are Jon Tanner, the hero of the game’s predecessor Driv3r. Tanner is in a coma, after having tried to run over convicted murderer Charles Jericho in an armored truck with a Dodge Challenger, instead of shooting him with a gun like a normal game (and, I suppose, in real life). The majority of the game takes place in Tanner’s imaginary coma-land, where you can jump into other drivers’ bodies to do good deeds for them, somehow putting you closer to catching Jericho.

Logically, it seems the player should be able to employ this spookily realistic out-of-body tactic to jump into Charles Jericho’s head, crash his car, and then jump back into Tanner’s body to arrest him. By the intelligent design of the game you can’t, because certain areas of San Francisco are locked until you use Tanner’s superior driving skills to help people out.

But here’s the thing: Tanner does not want to help people. Just like you, he wants to put Charles Jericho to justice. He resents having to help a teen win an illegal street race to save the kid’s tuition money, and he has zero interest in chauffeuring a wealthy woman to the club where the rapper she manages is performing. In fact, Jon Tanner doesn’t even like rap music, and he lets his passenger know this. In a game offering you the opportunity to jump bodies, it’s Tanner’s moments of rudeness that remind you that you’re still stuck inside one guy’s head.

The last time I wrecked a car, I was 20. I was crossing two lanes of traffic in the rain, and a car came out of the fog just in time to hit the rear wheel on the driver’s side of my Subaru. Several hours of nuanced crashing in Driver: San Francisco gave me some insight on how to really smash a car up; and as I got T-boned by what felt like the thirtieth time in an hour, I realized that had I not gunned my Subaru at the last second, I would have gotten hit square in the door. I could have died. Driver: San Francisco made me reconsider my mortality. It’s the most personal game I’ve ever played, and Ubisoft has no idea. They just want me to catch some asshole in an armored truck.