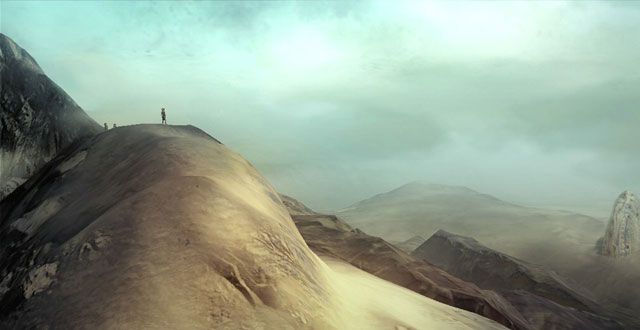 From Dust is a primordial kind of god game. Who would guess a supreme being spends its days toiling with fire and dirt—pouring levees out of hot lava, and wrestling the tide to keep settlements afloat? Certainly no-one in this day and age. In Spore, Mother Nature was concerned with evolution. SimCity’s greater good was a utopian existence of industry and urban life. Even the lord of Populous was less interested in raising and flattening land than he was in conquering his godless rivals. Only a tribe of ancient wanderers would see the Earth as god’s ultimate fixer-upper. From Dust traces the footsteps of nomads as they migrate across sparse, volatile islands, putting you in the place of their absent, blustering creator: the type who gives commandments to chiefs, rides across the sky on a sunbeam, and colonizes the Nile with spit and semen.

As a benevolent and somewhat omnipotent deity, you are tasked with protecting your followers, a stock of noble savages who were unfortunate enough to draw the lot of inhabiting an oceanic place with the highest occurrence of natural disasters known to man. This unstable archipelago is as beautiful as it is dangerous, and while the game’s art style resembles the scenic photographs that come in picture frames, or preloaded as a background on a Mac; the ability to jet around these packaged environments with a wormlike cursor called the Breath, as palms sprout and waves roll in, indeed breathes life into them. Sighting a tidal wave is majestic and terrifying. Watching as lava oozes down the side of a volcano is relaxing, but also disconcerting. The shores convey an unsettling contradiction, lending the world a primal sense of fascination.

For better, and worse, this dual-sidedness shows up in the relationship between From Dust’s real-time strategy elements and its sandbox building style. While it is tempting to terraform a region as one would construct a Minecraft-ian manor, landscapers must be mindful of swelling rivers and wildfires, which serve as ticking timers. On the other hand, erecting sand dunes can bog down the process of occupying turbulent isles. The incongruity can make godhood feel like a Herculean task of banging together two boulders that, when struck at the right angle, coruscate into sparks of ingenuity.

My primary concern isn’t what happens to my tribe, but how to keep it out of the way as I engage in planetary construction work. People become insignificant.

These flashes are brightest when they let us playfully approach strategy, such as in a desert known as the Thousand Sources, where digging in the sand springs leaks, unearthing gushing streams that grow into a river, which feeds an overflowing lake until it is on the verge of flooding the entire map. Meanwhile, your society of laid-back islanders and tottering elders inches towards the exit, blissfully unaware.

It is telling that I refer to the tribe as a sheep-like flock to be herded to sacred landmarks, instead of Bob, Linda, Florian, and Jay. They have minuscule touches of humanity. You can zoom in on them, as if observing them under a magnifying glass; and learn their traits, like being skilled at thatching roofs, or playing the bongos. They will call out to you in distress when stuck on a peak, or on the far side of a bank. I was even filled with anxiety when I found several had become stranded at the top of an active volcano—but it didn’t stop me from dumping lava on them myself after a few frustrating minutes spent trying to get them down.

The scale and scope of nature belittles such casualties. My primary concern isn’t what happens to my tribe, but how to keep it out of the way as I engage in planetary construction work. People become insignificant. So much so, I have forgotten to mention that From Dust was created by Éric Chahi, the revered designer of the cinematic adventure game Another World, a game that emphasized a human closeness to the world, instead of a distant outlook on the universe. And I thought that was what we had God for.