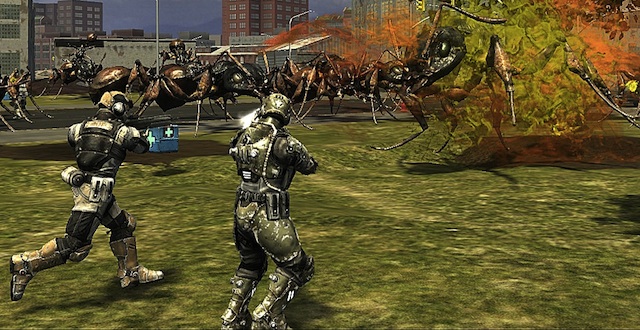 Insides out. As large ants emerge from underground, they look around briefly and pause for a moment. Perhaps they realize their fate as a giant military boot swiftly comes down to crush them. The ants crunch as they’re squished, and their green blood is plastered all over the screen. The boot lifts, and the sticky goo stretches along with it before the camera zooms in on the green pool left behind. The screen fades to reveal the developers: Vicious Cycle. Fitting.

As far as I can tell, aside from this insect’s uncanny ability to ruin a day spent lounging in the grass, there are two reasons we may find the above scenario appealing. The first, of course, is that ants are communists. Biologist E. O. Wilson was fond of vindicating Karl Marx’s belief that socialism works, by saying, “He just had the wrong species.” Sterilized worker ants are biologically hard-wired to live their lives in total interest of the colony because their existence cannot extend beyond the queen’s ability to reproduce. The lifestyle they promote is anathema to the kind we idealize and are genetically predisposed to.

The second reason is that our efforts to contain the comrades on little farms have failed, and they are slowly conquering the world. A particular school of Argentine ants, once native to South America, have migrated into the U.S., Europe, and Japan to form a global mega-colony consisting entirely of the same family of ants. Spanning thousands of miles, this colony continues to expand, wiping out native ant species, other insects, and indirectly endangering the existence of other animals.

Interest in the world of Earth Defense Force, then, is predicated on the notion that people want to gleefully kill any of these insects that cross their path. In a lot of ways, the new entry Insect Armageddon delivers on its opening credits. Giant insects swarm and surround your three-person squad. Massive spiders roam the city of New Detroit, unleashing their dog-sized spawn in the hopes that they’ll latch onto you and self-destruct. On top of this, gigantic alien carriers fill the skies and release even more swarms of laser-wielding aircraft. Buildings tumble when slammed with rockets.

The only thing missing from this smorgasbord is the punch. Insect Armageddon should speak with bombast. Its four classes of troopers are loaded with numerous assault rifles, shotguns, and grenade/missile launchers; but you’ll feel more feedback opening a jar of pickles. The weapons sound limp, and the controller doesn’t rumble—as is the norm by now—when you fire or connect with your enemies. Meanwhile, the crunch and splatter heard in the opening credits are either mysteriously nonexistent or underwhelming. Bug killing seems a little too clean.

It’s easy to think that we experience videogames primarily in the visual realm, but it’s often sound that truly emphasizes not only what we’re viewing, but also what we’re feeling. That emphasis is missing here.

As a reference, ants in the previous game, Earth Defense Force 2017, literally unleashed screams of agony as rockets pierced their exoskeletons. In Insect Armageddon the waves of enemies are relentless, the explosions numerous, and the collapsing buildings as plentiful as the desire to bring them crashing down. Why does it all feel strangely distant? It’s easy to think that we experience videogames primarily in the visual realm, but it’s often sound that truly emphasizes not only what we’re viewing, but also what we’re feeling. That emphasis is missing here.

Even visually, this representation of insecticide leaves something to be desired. 2017 paints the air green when its bugs are shot. Blasts send screaming ants flying so hard their bodies end up bouncing off the ground and into the sky. If nothing else, it certainly looks like pure, hilarious mayhem is unfolding before you. Compared to this—or all the blood juiced from those ants in the intro—Insect Armageddon’s main act is tame. Bugs that are shot mostly dissolve in mid-air. Larger enemies don’t even bleed, and they rarely stun, especially with the initial set of weapons.

I feel a little strange claiming that these details are where Insect Armageddon stumbles. It seems grotesque. I’m always hoping for videogames to venture higher, pursue loftier goals. Making sure I feel a giant insect snap in half and spew blood isn’t going to convince me the medium is going places.

But this is more than an aesthetic issue; it is clearly also one of principle. Our insect invaders here represent a life of sterility, one with no choices to be made and no real boundaries to be tested. It’s not enough to simply survive this opponent: it must be destroyed, and with gusto. 2017 made this threat, for all its size and terror, look ridiculous as it bounced off buildings and was launched across the cityscape. Overtaken by that? Not by a long shot! This game, though, isn’t as convincing.

An Earth Defense Force game pulls because the experience feels so of the moment, as if it’s rushing you with an impressive force. By failing to offer sufficient forms of feedback, though, Insect Armageddon ends up putting a distance between the player and the experience. It’ll never be as rewarding as it could’ve been, and in this clash of civilizations it’ll never render as immediate a victory. If only it had a little guts.