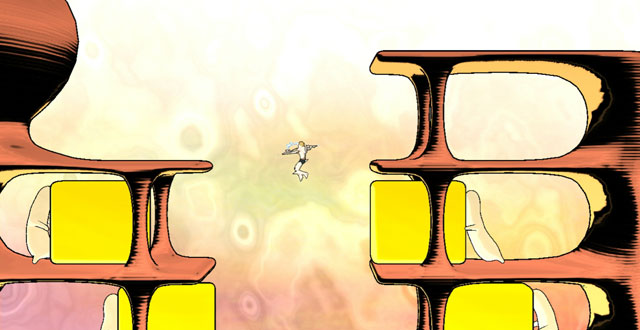 This is important to know about Enoch: he wears actual, real-world designer jeans. Edwins, to be specific. Despite being the one man to be taken up to heaven without fulfilling the prerequisite of death, Enoch has a particular love for the world and the things in it. Still, he was chosen by God because he knows his priorities. He may have one foot on earth, but his head is squarely situated above the clouds. The player isn’t asked to relate to Enoch. Instead, they marvel at his character, controlling but not directing him. After all, only one Person can tell Enoch what to do.

But there’s a conspicuous absence in the list of characters in El Shaddai: Ascension of the Metatron, which is based on the apocryphal Book of Enoch, the story of the archangels’ mission to capture the fallen angels; destroy their offspring, the Nephilim; and restore order to earth. The titular character is nowhere to be seen or heard from throughout the course of the game. “El Shaddai” can be translated as “Almighty God,” and the name is meant to emphasize God’s unwavering sovereignty and authority. God doesn’t merely make his will known and expect obedience—he causes his will to come about himself, through means that often seem mysterious and unfathomable to those on earth.

Here, God’s presence is felt but never confirmed. He is said to have sent Enoch on a mission, but we only hear that news secondhand. Our guide, Lucifel, converses with God over a cell phone. At least, that’s whom we assume he is talking to. Throughout the game, we hear one side of those phone conversations. They do not inspire confidence in our mission or our ability to carry it out. Lucifel talks to God as one talks to an incredibly anxious and unsure friend—constantly reassuring God of Enoch’s ability and faith; subverting those very things by having these conversations within earshot of our protagonist.

It’s Lucifel who provides us with those things we expect from God: salvation, meaning, and guidance.

We are consistently encouraged to place our trust in Lucifel—the angel who, according to canonical scripture, ultimately falls away and rebels openly against God and his will in an effort to usurp God’s power. This is partially because he tells us everything we need to know. He tells us what our purpose is, what to expect, and most importantly, what just happened. His clarifying recap of each chapter provides context and meaning to what are normally head-spinning series of events. Without him, nothing would make any sense.

Even more convincingly, Lucifel is the one who provides our salvation. He saves us, not only by rolling back time with a snap every time we fall off of a cliff or platform (something that happens entirely too much in this game), but also by acting as our checkpoint, literally saving the game as Enoch approaches. We rest in the knowledge that this place, where Lucifel stands, will be the furthest we will fall back. Because we have found him, we have found progress, and are closer to victory and our goals. It’s Lucifel who provides us with those things we expect from God: salvation, meaning, and guidance.

Still, Lucifel has not yet become Lucifer. He never openly betrays his position, and he spends the game helping Enoch carry out God’s orders. But because it is well established that Lucifel can manipulate and move through time, we know he must be thinking about it. Because the game gives us Lucifer as a guide, we’re sensing that rebellion. Everything about Lucifel, from his dress to his means of communication with God, betrays his ultimate perspective: God is not one to be followed, but fought against.

The player is tempted to agree. By taking God out of the picture and giving us only Lucifel and Enoch through whom to experience the world, we do without the bird’s-eye view of the actual Book of Enoch. While the book, which claims to have been written by Enoch himself, explains how these events take place within God’s ultimate plan, the game focuses on the perspective of Enoch in the moment of trial. He merely wants to save the earth from itself, and his knowledge of the greater plan is cursory. Lucifel is flippant and vague, and God appears coy at best.

But Enoch continues to fight, and purify, those seven spirits who have made a home in their God-forsaken tower. He keeps running forward. When he falls in battle he comes back with a vengeance, telling himself over and over, “No problem. Everything’s fine.” He fights the Watchers with conviction, stopping only to “purify” his weapon when it glows orange, which symbolizes that the weapon is corrupted by sin. This purification mechanic is a way to cause the fighting to regularly grind to a halt, if only for a second or two. During this pause, we see Enoch’s conviction grow. He sees God carrying out his plan by giving him access to weapons, by giving him Lucifel, by providing angels to watch over him and armor to guard him. He attributes Lucifel and his own good works to God. Meanwhile, the player uses this pause in the action to consider hard questions: Why is Enoch fighting? Why doesn’t God do this himself? Why does Lucifel talk to God the way he does? What is the meaning of this? Is Enoch just a pawn? Are the fallen angels? Enoch has his own answers to these questions, but El Shaddai makes it increasingly difficult for us to find common ground with him. Enoch does no preaching—he merely lives out his faith.

Why is Enoch fighting? Why doesn’t God do this himself?

El Shaddai is a beautiful, unique, fascinating journey through several distinct worlds, each of which has its own profoundly resonant quality that ought to tempt Enoch not to destroy them. But it takes more than that to cause Enoch to question his faith. His faith holds firm even through the most difficult tests. He sees friends fall, and he comes to terms with God’s sovereign will. During increasingly brutal and frustrating platforming sections, we lead Enoch to stumble, but Lucifel snaps him back into place on God’s orders. We hesitate in the midst of a fight that causes Enoch to be killed, but Enoch’s not done.

As this joyful pawn is resurrected for the hundredth time he says, “No problem. Everything’s fine.”