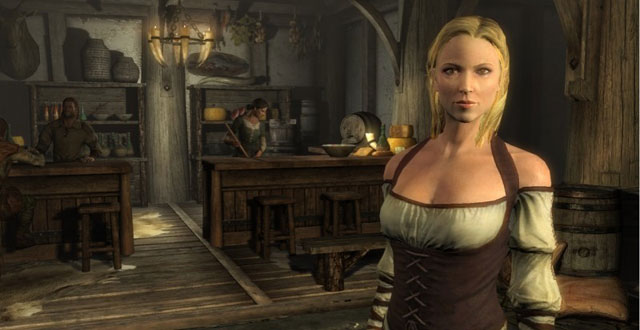 I keep trying to imagine how white supremacists play a game like The Elder Scrolls V: Skyrim. I know they do: I was linked to a forum thread where a bunch of guys talked about what guilds they wanted to join, and remarked on how great the graphics looked, and held a poll ranking races by racial purity, and exchanged tips on exterminating all non-whites from the game.

I know how I play Skyrim. I do not play like a white supremacist. I play as a warrior/mage/thief character. A double major in liberal arts, essentially. The game is drastically simpler than its needlessly difficult predecessors. Some call it “dumbed down,” but I’m glad I wasn’t punished for not buying the strategy guide and studying the wiki, like I was with previous entries in the series.

I know how my roommate plays Skyrim. He plays with a few buddies, having a beer, trying his best to make the game destroy itself. Skyrim presents an open world and it’s prone to breaking. Non-player characters start conversations in one room and follow you into a building to finish their sentence. Then they stand around awkwardly and shuffle back out of the room. Characters get stuck in walls like it’s the only thing to do in town. At one point I saw a full dragon skeleton in the middle of a small hamlet. Every time I go back it’s there. People have to take convoluted routes around it, and once somebody managed to get trapped in its ribcage. I wanted to show my roommate, but he wasn’t home.

There is no pressure in Skyrim. No deadlines.

I wonder how the white supremacist plays a game like Skyrim. There’s a whole storyline about a civil war going on. The Stormcloaks are struggling to keep the land of Skyrim to the Nords, with a strict Arizonian immigration policy. I had thought their racism was written to make the conflict ambiguous—videogame logic states that rebellions are always for the better—but maybe it’s not supposed to be anything except what it is. I will be put off and the white supremacists will nod in agreement. Maybe the game itself is entirely neutral. The world simply exists and we make of it what we will.

There is no pressure in Skyrim. No deadlines. There are things to see, places to go, but rarely do they seem urgent. There is no pressure to intervene, no pressure to do anything. There is no morality system to judge you, which is all the rage these days in Western role-playing games. Skyrim doesn’t try to impose anything on the player, even values. There are mines that can be mined in, potatoes that can be cooked, swords to be refined, and shields to be enchanted; all there if you want them, and all yours to completely ignore.

I doubt white supremacists like Oblivion or Morrowind or Daggerfall as much. All the previous entries in the Elder Scrolls series felt too static, too lifeless. Stay on a corner of a busy city in Skyrim and watch people go about their business, talking about inane things, bumping into each other, and generally aping human behavior enough to seem lifelike. Go outside of town and watch as a blizzard comes in from the north, dusting all these coniferous trees with a light layer of snow. Stand in a similar city corner in Daggerfall, sandwiched between drab, randomly generated buildings, and watch as cardboard cutouts wait for you to greet them. But there is enough activity happening in Skyrim that imposing one’s will (racially motivated or otherwise) on the game is satisfying. You, the player (and perhaps, white supremacist), feel like your actions actually matter.

Skyrim is filled with soul and craft and careful attention to detail. It is unafraid that you may never see it all, buried deep in a dungeon in the corner of the map. It doesn’t shepherd you there, and that’s why it’s so special: You can tell yourself it’s all yours. Bethesda has finally managed to complete the dream they set out to create all those years ago with The Elder Scrolls: Arena. They wanted to make a game where any player could play as whomever they wanted, however they wanted. They’ve finally done it.