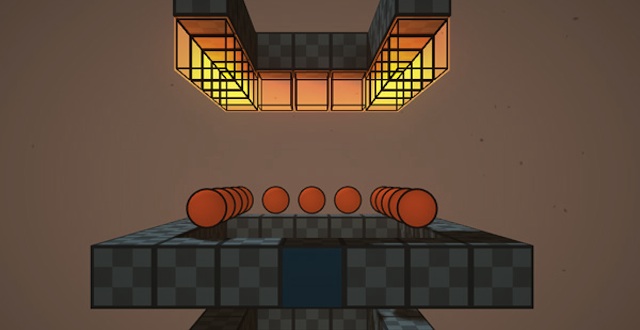 The image at the center of English Country Tune is a three-dimensional map of clusters, each separated by a thin line. It’s called the universe. It’s all-encompassing, and it can be spun around and examined. Enter into one of the clusters, one of the many galaxies in the universe, and the image repeats, except now each cluster is a different puzzle.

The one constant in the universe is the checkered board, and the “spaceship” (really, a flat tile) that moves by flipping over itself on that board. Each galaxy has a different objective: the early stages have the player pushing “larvae” into “incubators.” The words are a bit of context and misdirection—almost everything about English Country Tune is abstract. Look at the title. English Country Tune. It gives a warm, nostalgic feeling; but do not let the pastels fool you. The game is cold, all rules and logic. You quickly figure out the rules for this galaxy. Push the larvae by moving into them. Simple. In later stages (a whole different galaxy) 3D is added to the picture, and so enters a new rule. Push a block off an edge and its gravity shifts to that of the spaceship’s landing position.

The first time it happened, I stared at my screen processing it. I undid the move and got it a different way. But it reminded me of my days in 11th-grade math, muddling my way through. I understood that certain actions worked and certain others didn’t. And like in 11th-grade math, that would only get me so far. Eventually it came: I deciphered it, the a-ha moment, the moment my universe expanded.

English Country Tune comes from Stephen Lavelle, who also goes by increpare. He is a designer’s designer, a man whose games constantly tease and toy with what’s possible in games. In his hands the medium is so pliable. It can be a vessel for deeply personal narratives on creative freedom that can barely be called games, or straight and cold puzzlers like Kompression.

This is one of the few puzzle games with spoilers.

Lavelle is easily one of the most prolific game developers out there, but English Country Tune is his first commercial release. Unlike in most of his games, there’s a level of polish and breadth here. The game flirts with several different types of puzzles, from difficult to maddeningly difficult, and there’s a surprising amount of variety and growth in simple concepts. Start with a set of puzzles on a flat plane, and then the advanced set where the ideas develop and twist, and the idea you barely got a handle on becomes something else altogether. The garden stages have a simple concept: If you land on a white tile, an impassable shrub grows on that space when you move away. The idea is to plan your moves carefully enough that you don’t box yourself in. In 3D, you can also trap yourself if you move perpendicular to your last position. The trick to the puzzle turns your efforts back on yourself. The word “increpare” means to chide or rebuke in Latin. It fits: your first time with a puzzle will feel like a harsh lesson.

It’s these conceptual shifts, this transformation of one idea into another, that makes English Country Tune so rewarding. Each of the puzzle types would make an interesting game. Here their concepts play off each other, and build nuance. In most puzzle games the drive is in beating the system, but in this one, I wanted to see what Lavelle had up his sleeve next. This is one of the few puzzle games with spoilers.

Lavelle’s chief success here is making a game this cold and abstract and harsh into a compelling one. His misleading names are the only concessions to concreteness. He does not embed a story to make the puzzles more palatable, because in his universe, every puzzle shines brightly.