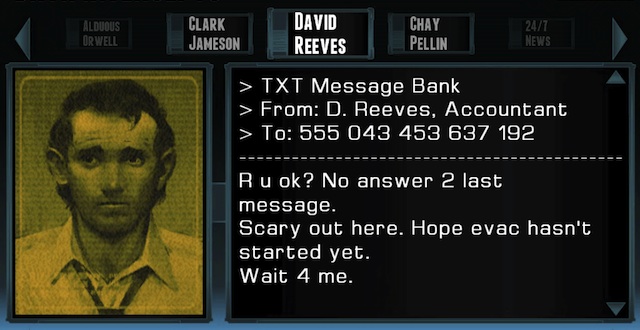 How do you put soul in a game about a robot fighting other robots? On its face, Epoch seems destined to remain a serviceable cover-based iPhone shooter. It fills that role surprisingly well. What seems like a misguided attempt to fit a watered-down Gears of War-style mechanic into a mobile device ends up a smart, economical innovation that all but abandons the console-based cover mechanics we’re familiar with for something more interesting and dynamic.

The system is serviceable in the best way, requiring only quick flicks to the left, right, or upward in order to dash behind various obstacles. The protagonist is a robot, devoid of emotion and the excitement of war. He doesn’t view taking cover as cowering, only a logical response to incoming firepower. His enemies are in fact his robotic peers, but to him they are mere obstacles.

The real characters in this game—the human beings—are explored through text messages, news reports, emails, and transcripts. After each area is cleared, the robot acquires these digital documents in order to gain information about his objective, the Princess’ whereabouts. It’s part of his programming to find her at all costs. Meanwhile, our motivation is to discover the truth about these apocalyptic events. Even after the robot protagonist has reached his destination, the game invites us to play through the same levels at higher difficulties in order to find more upgrades and information. The upgrades are helpful for the robot to become as efficient a machine as possible—unspectacular but statistical improvements. But the steady trickle of gathered information is anything but utilitarian: a man texts his last words to his wife, a radio personality projects his frustration with the government onto the robot rebellion, a corporation attempts to deny responsibility for their malfunctioning products.

In order to attain these missives, we must guide our mechanical hero through a formerly bustling metropolis, apparently held together on the backs of robot slaves. We use the rubble as cover, flowing from one side to the other to avoid bullets, lasers, and grenades. What serves functionally as dodging, ducking, and flying to avoid enemy fire feels to the human mind like dancing or acrobatics. A rhythm starts to unveil itself, creating a kind of metallic rhythm game with more freestyle play than pattern recognition. Mistakes are signified by a clanging sound, reducing health and inducing an extremely human cringe. Moments of sustained success feel flighty and artful, like an improvisational dance around immobilizing fireworks.

What gives this game with no active human characters resonance is the inherent contrast between man and machine. The machine we control sees little more than pure information and opportunities for shooting, ducking and dodging. We see opportunities for flight, for love, for rebellion and justice. We see the tragedy of the destruction of the human race, while our mechanical slaves merely see objectives.

While many lament the loss of humanity inherent in our unabashed embrace of technological devices—and while a game like Epoch may at first seem to support that viewpoint—the correspondence of  a society relying on technology breathes life into our apocalyptic exploration, just as finding a letter written in the midst of the Civil War might now. Whether we’re texting on our phone, listening diligently to talk radio, or staring, slack-jawed, at the latest graphically impressive iPhone game, we overstate the problem when we refer to ourselves as mindless drones. Is there a danger of forgetting basic human assumptions in the face of cold, hard logic and technology? Sure. But Epoch suggests that when faced with the marvel of machines and their destruction of mankind, it’s the little things that matter: love notes, cries of protest, and human creativity.