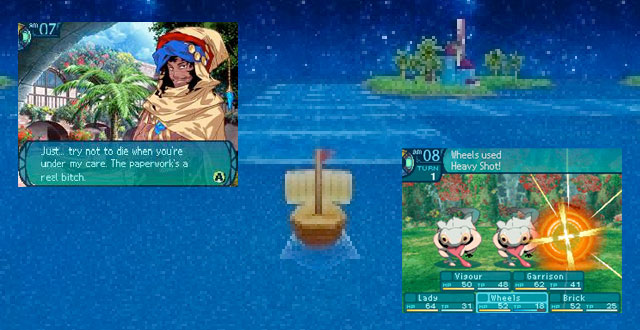 For maybe the last five months, this was the only solo game I played. What can I say? I was busy, mired in half-a-dozen projects and totally uninterested in sinking myself into, say, Fallout: New Vegas or Ass. Creed: Bros. I didn’t want immersion: I was looking for distraction, something I could play in ten- or fifteen-minute bursts. And that’s how I played Etrian Odyssey III: The Drowned City.

It takes dozens of hours to finish this game. People will tell you it’s hard, one of the new crop of retro, hard-assed Japanese role-playing games, but they’re wrong: Once you fiddle with your party line-up, get the hang of the mapmaking, and learn to pack enough potions, you’re off to the races. What looks like a punishing grind turns into a soothing routine. Every time you play, you can get a little further, notch another hallway on your map, maybe level up once or twice. The end isn’t in sight—not even close—but you know it’s attainable.

In fact, I resent when people call Etrian Odyssey a grind—a repetitive behavior suffered just for numerical advantage. It’s more like a drone. The term “drone” gets a bad rap, but in music, drones are some of the best things you’ll ever hear: a focused stream of sound that sucks you in, blocks out the world, and drowns you in subtle variations and ever-changing overtones. A good drone compels and rewards deep listening, holding you rapt with the slightest change from a hand or a heartbeat. You could listen forever; that’s kind of the point.

Same with Etrian Odyssey III, which is pared down to the twin pleasures of discovery and risk/reward. Little variations—new art, trickier maps—keep every level fresh, but none of them poses enough of a challenge really to set you back or knock you out of the flow. Sure, there’s a story—something about a family that’s split apart, and a great evil, and a tree that makes androids—and the story has an ending; but it’s just a slight bait hanging around every stratum, luring you forward, like you needed an excuse. The real goal of the game is to make your map. You do it square by square, floor by floor, and if you’re like me, you’ll never get sick of it: Step forward; check to the left; check to the right; jot the lines on the grid; repeat eighty thousand times.

I can’t imagine playing Etrian Odyssey III in one long binge. Maybe if I were stuck in the hospital with all my bones broken, or in prison—but I’d guess it’d get maddening. The only way to deal with the game is to spread it out, a little a day, until you forget it’s supposed to end.

For close to half a year, this game was a constant in my life. I remember playing it in a subway in Brooklyn, on a flight to San Francisco, on my couch on Christmas Eve. After long work nights, it was always there, a Zen dungeon crawl that I could start and set aside at any time.

It only fizzed out at the end. There’s a trick “true” ending that you only get if you’re clever or, like me, go and check a walkthrough. I know there’s a tradition in Japan of giving lazy gamers a less-satisfying ending and holding out the real one for the most hardcore players. But who is a casual player of Etrian Odyssey? Who, after submitting to a linear experience, wants to stop and think? It’s like playing Liszt on a didgeridoo.

But any ending would fall flat. You don’t play Etrian Odyssey to see the ending but to enjoy—not a journey, but a state of being. And like a drone, there’s no way to build to a big finish, and no way to give this endless thing an ending. It’s better simply to stop.