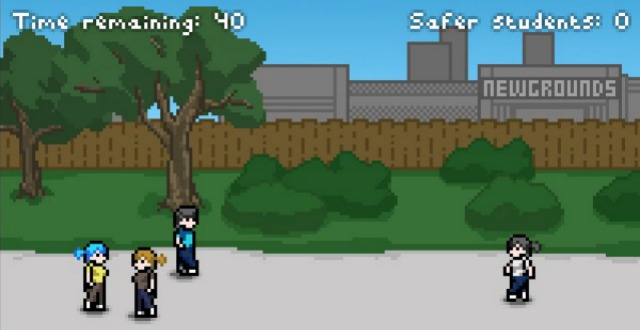 They place themselves at college campuses, at bus stops, outside coffee shops. Sometimes you find them when you’re turning the next corner to the library, with their name tags, fanny packs, and matching T-shirts. They step directly into your path with a bright, toothy gin and big, sympathetic eyes, waving their hands in your face frantically just to make sure you really see them.

If you’ve ever attended an institution of higher learning, you’ve met a student activist. For the most part, they’re not bad people. They’re earnest and enthusiastic, making themselves vulnerable to mockery and dismissal over the issue they genuinely care about. They want you to care about it too, because it’s important! The problem is, you don’t. And you won’t.

Randomnine’s Fear Is Vigilance introduces Justine and Marcy, two arguably good-hearted and earnest young activists. All they want is to show small-town students how dangerous it is to hang around the park at night by handing out handheld alarms—and when that doesn’t work, by skulking around in ninja attire and beating the living crap out of passers-by. And maybe they’ll collect some gas money while they’re at it.

You play Marcy, the well-intentioned but hapless sidekick to Justine, the dominant character in the relationship. She tells you what to do—from telling you what your goal is to reminding you what buttons to press. If the latter doesn’t demonstrate Marcy’s complete subordination to Justine (“Jus”), then nothing does: the controls include two adjacent action keys, “Z” and “X,” for handing out alarms, collecting donations, or acts of aggression, as the case may be.

The story mode, playable in about 15 minutes, alternates between day and night à la Castlevania II: Simon’s Quest. By day, Marcy tries to donate the most alarms possible to students on campus. I sidescroll back and forth around campus, offering my wares using X; hitting it again quickly to skip lines of dialogue, because I’m fighting against a time limit. Justine stands back and waits for me.

Day One will invariably go poorly, with most people on campus rudely rejecting me. But as this turns to night, X becomes a punch button and Z becomes a nifty block-breaker. Disguised as a ninja, I skulk around the park, looking for straggling students to attack while their mates remain offscreen. I have a certain quota of students to attack each night, and a life bar, rather than a time limit, to maintain. When I’m in danger, I hide in the bushes. It’s best to catch the students off-guard: those who spot you always seem to hit back with a little more vigor.

By Days Two and Three, more students seem to come around. This complicates my nighttime skulduggery; now I have to be wary that whomever I pounce on might carry one of our alarms, warning larger groups of students. The more success I have by day, the more trouble this gives me at night.

But this little satire is worth playing again: to outdo your own daytime record, to gain achievements. I wonder if I’m supposed to have a deep realization, as I play Fear Is Vigilance, about the dangers of having a messiah complex. But the meaning that strikes me the most, that disturbs me the most, is my feeling that all of this is just a game. Fear Is Vigilance puts you in the interesting situation of being an antagonist: instead of fighting a threat created by some villain, you are the threat imposed on the game’s world. And on Day Four, everyone lines up to receive an alarm to protect themselves from, well, you. And then you drive off, scot-free.

What I have become, based on a combination of Marcy and Jus’ behavior, and my own relationship to the videogame mechanics, is a disengaged completionist. I don’t really care about handing out alarms for student safety. I’m just doing it for the sake of doing it. As far as I know, Marcy believes in this “cause” as much as I do. But she has more of a reason to follow through with such a charade: She has an obvious crush on Justine. I just want to beat my best record.

Eventually I began to see the game as an allegory—not just for what it means to believe in a meaningless cause, but for what happens when you don’t. Whenever I see a politician or lobbyist get up on the “cause” soapbox, I have to worry that I’m not being fed a manufactured problem that only they have the solution to. And now I have to wonder the same thing whenever I see those exhausted student activists. I don’t care about their cause. Chances are I won’t, ever. But how many of them have ulterior motives? How many will develop those motives once they’ve lost their optimism—because of people like me, who won’t take the alarm?