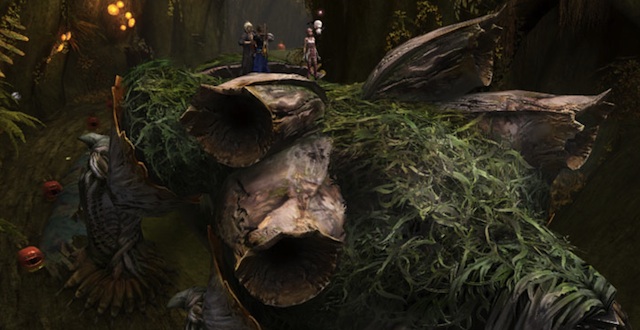 The best way to think about Final Fantasy is to not think about Final Fantasy at all. Instead, you should think about Van Halen, which recently reunited again. They played a show at the Cafe Wha?, a 50-person venue where Bob Dylan performed before he was famous. It’s a symbol of a new beginning for the band, which was at one time the Final Fantasy of rock bands, the absolute biggest in the world—both in popularity and in money-grubbing, rock-and-roll bloat. A new album is in the works, as is a tour. But at this point, is Van Halen too out of touch, too mired in its past identity, to understand its own reinvention? Or does that even matter? I’d like to ask the same questions of Final Fantasy XIII-2.

At this point, even Square Enix must have trouble figuring out which edition in the series it’s on. The misleadingly titled Final Fantasy has in the past two decades evolved into a massive entertainment franchise, spanning films, anime series, books, a toy line, and nearly 50 videogames, featuring a main series and myriad offshoots, reboots, and ill-advised misfires. What’s most important about Final Fantasy XIII-2 is that anyone who picks it up and plays it for more than five minutes will recognize it as a Final Fantasy title. Unfortunately, Final Fantasy XIII-2 also feels like a stopgap—an olive branch to fans attempting to erase memories of the two last Final Fantasy games.

At the beginning of 2010, FFXIII-2’s direct predecessor Final Fantasy XIII had highlighted an uncomfortable truth: Now that it’s possible to create completely open worlds in a videogame, Final Fantasy and its concern for immersing the player in an exhaustive interactive story have become old-model. Final Fantasy XIII scoffed at the concept of player agency: you were expected to go through the game, play out the story, and be psyched about it. But many complained that the game felt insultingly linear.

Final Fantasy XIV was a conceptually ambitious attempt to fuse a massively multiplayer online game in the style of World of Warcraft with elements of a conventional single-player RPG. But it was mired in bugs, design issues, and a lack of actual things for players to do. Playing FFXIV was like going to the BMW dealership and buying a brand-new 7 Series, only to get halfway home and realize someone had swapped out all of the parts with ones they’d salvaged from a rusty Yugo. Final Fantasy XIV enjoyed such tepid reception, in fact, that Square Enix issued two official letters of apology to fans.

How do you maintain the controlled, story-based experience that is the hallmark of the Final Fantasy series, while also making concessions to the idea of player choice?

Games such as World of Warcraft and The Elder Scrolls V: Skyrim have in recent years changed the way we look at role-playing games—they’ve used the increased processing power of today’s consoles to bust the idea of a game world wide open, creating settings where the player is in charge of their own destiny. For example, early on in Skyrim you are guided through a series of catacombs by some guy you’ve just met. If you want, you can try to rob him afterward. In Final Fantasy XIII-2, you wouldn’t even be able to draw your sword on the guy.

Such a dichotomy of freedom versus control smacks of punk rock’s rebellion against the structured traditions of bands like, say, Van Halen. It’s a classic battle between new and old, with the odds stacked heavily in favor of the new. In a situation where it’s nearly inevitable that you’re going to lose, you can go down swinging, or you can adapt.

Final Fantasy XIII-2 wants to give its players a new sense of agency—a carrot for those spoiled by the virtual sandbox of Skyrim. It really does try. The new game’s conundrum is this: How do you maintain the controlled, story-based experience that is the hallmark of the Final Fantasy series, while also making concessions to the idea of player choice? It seems that Square Enix knew that accomplishing this in a sequel to Final Fantasy XIII was like bringing a knife to a gunfight, so it at least decided it was going to come strapped with a really sharp Swiss Army Knife.

Have you ever read a Choose Your Own Adventure book? Well, Final Fantasy XIII-2 is more or less like that. Periodically, it presents you with a set of choices, sometimes within game dialogue and during cut scenes, and other times by simply asking you what you think is going on in the game. These choices determine the order in which the story unfolds.

Here’s the gist: The protagonist is a girl named Serah Farron. She’s the younger sister of Lightning, the heroine of Final Fantasy XIII. Lightning has disappeared trying to defend Cocoon, the skybound world that served as the crux of FFXIII. Unfortunately, Cocoon has also disappeared, which the characters are less than enthusiastic about. Serah is joined by Noel Kreiss, some dude who has literally fallen out of the sky and claims to be the last human alive in the near future. He has been sent back in time to save the human race. (Those finding Kreiss/Christ parallels would not be far off the mark.) Noel and Serah team up to traverse the space-time continuum—this is where player choice comes in—and attempt to find Lightning and change whatever eventually will have led to Cocoon’s fall (participles get complicated when time travel enters the picture). At some point, you will have to fight something that resembles a giant tomato.

It’s a classic battle between new and old, with the odds stacked heavily in favor of the new.

The more you sit and consider time travel, the game’s primary plot device, the less sense it actually makes. If Final Fantasy XIII-2 treats the space-time continuum as a line that isn’t completely straight, it is at least firmly crooked, allowing only a certain amount of deviation. You may jump from time to time, world to world, but the game wouldn’t be terribly different if you were traveling in a single timeline. It repeatedly claims that “If you change the future, you can change the past,” only to not really follow through. You can go into the future and fix a black hole, only to travel back and find you’ve created a parallel reality, though it’ll only parallel one specific time period. Sometimes, if you change the future and head back into the past, you’ll find nothing has changed at all. Most of the time, your actions have no true impact on the events of the future—only the order in which you experience them.

Compare this to Back to the Future, where Marty McFly nearly prevents himself from being born simply by saving his dad from being hit by a moving car. No matter what you do to change the sands of time, Square Enix has prepared a finite number of endings for you, and no amount of mucking around in history can alter that. In other words, Final Fantasy XIII-2 does not allow you the option of traveling back in time and accidentally becoming your own mother or father. This is important. It should be the metric of a true time-travel story—that anything can change anything.

With Choose Your Own Adventure dynamics, it feels like Final Fantasy wants to fit in with the cool kids but can’t quite figure out how. Yet Final Fantasy as a series has always been more interested in giving millions of people across the world a set of shared game experiences—as opposed to giving each player an individual experience, like Skyrim. There should still be room for both of these archetypes in games—sometimes, people just want a guided tour through something they know they’ll probably enjoy. Final Fantasy XIII-2 is difficult to have a strong opinion on: it’s hard to cast judgment on something that doesn’t even know what it’s trying to be.