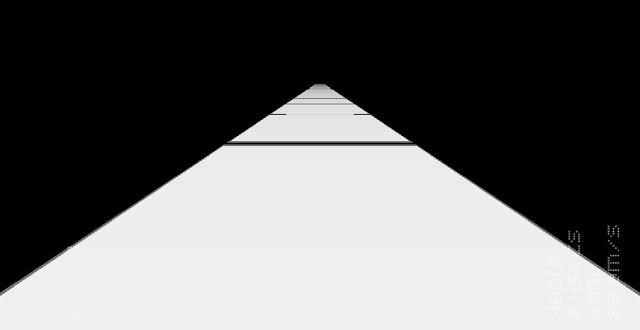 The developer calls Fotonica “a first-person game about jumping, sense of speed, and discovery.” I’d choose different words. Something like, a chemical cocktail of Canabalt, Mirror’s Edge, and a virtual-reality cave. I’d go so far as to compare this wireframe runner to tangible things: a hamster wheel, for instance, or a can opener without the usefulness. I imagine hamsters exiting the wheel have similar thoughts to someone who has played Fotonica: What have I been doing for the past 30 minutes?

Fotonica is preoccupied with the problem of running, sometimes endlessly, in the third dimension. While this may sound like an exercise in quantum physics, it plays out exactly how you’d think it would—like any other game where you can’t stop running. Only now, the path funnels you forward, toward a vanishing point at the center of the screen, amid intergalactic scaffolding engraved in Tron-like vectors. The effect gives the sensation that you are being sucked into the blackness of your monitor, through the chips and transistors and all the firing parts, down to the level of 01110000011.

The hole-hopping formula is as banal as it is hypnotic. You press the button when the game tells you to press the button; and you let go of it when it tells you to let go of it. Which button doesn’t matter––as long as it isn’t the R key, which restarts the level, or a key that is tied to system functions––as if to emphasize the point that you’re not doing anything. This is a menial task for your distraction. And even though you couldn’t pay me to ride a bike to work, and I don’t keep track of my credit card balance because it’s too much of a hassle, I’ll gladly push a button and grab the red orbs.

It isn’t necessary for every game to make a life-fulfilling statement, or deliver a spine-tingling experience, but at the very least, it should not make me feel that I’m becoming my computer’s computer.

Playing Fotonica fits alongside modern chores, like sifting through too much information, or resetting online passwords I’ve forgotten. It isn’t necessary for every game to make a life-fulfilling statement, or deliver a spine-tingling experience, but at the very least, it should not make me feel that I’m becoming my computer’s computer. A degree of sophistication isn’t out of reach for such a simple genre. Bumpy Road was heartfelt. Rat on a Skateboard provided tactile play. And Solipskier turned the runner on its head, letting you control the track.

In contrast, Fotonica is as mechanical and hollow as its abstract-sounding name suggests; a manufactured program that bends game rules into a conveyer belt at a factory that produces nothing. Fittingly, artistic design is scarce but cool-looking, consisting of a space-age “skin” and some graphical effects, many of which can be turned off. For instance, the motion blur and glowing particles can be toned down. Also, the flailing pair of arms, which imitates a person on the run, disappears. Even the lines that form shapes and ridges in the distance fade away. These distinctions are withdrawn, until all that’s left is you and the machine.