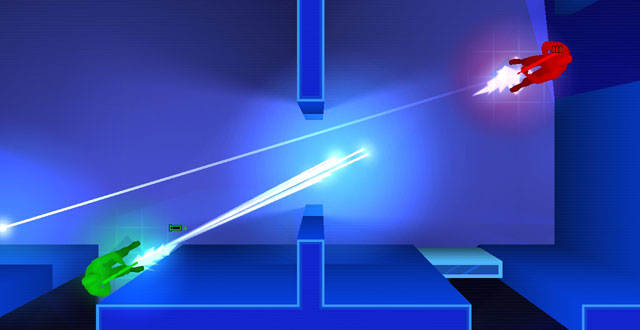 It’s a perfect moment if I ever saw one: a well-aimed rocket crashes into the low table behind which both my shotgun and rocket-launcher guy are crouched, and then time stops. The second round of my match against “Cecek” in Frozen Synapse ends. It’s that rare moment, when you know all is lost and yet kind of appreciate the symmetry, the beauty of impending doom. I look at the field, at the table at that precise moment where it’s not yet gone and not yet, well, exploded. I simulate the next turn: it’s too late to try and move them out of the way. My units are dead; they just don’t know it yet.

“Yeah!” the chat box in the upper corner blips. I didn’t know you could explode tables! “You have to duck your rocket-launcher guy to hit low obstacles,” Cecek messages me. “Thanks!” I reply, and begin to flank and systematically dismantle Cecek’s whole force with my remaining two machine-gun soldiers.

Frozen Synapse is that kind of game: one moment of feeling like the generous winner, before losing everything in split-seconds. It’s an elegant top-down game of vaguely cyberpunk, vaguely Tron-looking turn-based tactics, but not quite. A match of Frozen Synapse consists of two players, each with about four units with different abilities. There’s the deadly short-range shotgun guy, the mid-range machine gunner, a sniper, a grenade launcher who can bounce explosives around corners, and the wall-crushing rocket-launcher guy.

You overlook a small, abstract field of randomly generated office environments. The goal is—at least in the most popular deathmatch mode—to eliminate all of your opponent’s units. You do so by programming each of your units with detailed orders for the next five-second turn: Go over to that door, duck, wait half a second, than stand up, aim in the direction of the door, and step out of the door to get shot in the face by your much smarter opponent.

Your opponent meanwhile does the same; and when each of you has finally “committed” to your turn, both play out simultaneously. “Committing” is excruciating, made even worse by the game’s simulation feature. Before you click “Next Turn,” you can “simulate” your turn to find out how your units will behave and, more importantly, how the enemy units could behave. It might take hours, if not days, before two players have committed to their turns—making it possible to play (and lose) in an infinite number of matches at once.

It’s a maddening system. While turn-based strategy games like Advance Wars are about grand schemes, Frozen Snyapse is about getting into the head of your opponent in under five seconds while at the same time obfuscating your moves. Will that shotgunner take the left corridor or the right? Will my opponent anticipate that I let my rocket launcher destroy his own cover, catching the dangerous machine-gunner in the blast?

You don’t chat; you don’t trash talk during a game of Frozen Synapse. My opponents on the UK1 server were not a talkative bunch, “Cecek” an anomaly. In this regard, it’s like chess: you get to know each other through your moves. But on a much deeper level, Frozen Synapse is about the horror of commitment, about how you can “simulate” each and every possible outcome and interplay of moves of all the different actors on the field without making a proper move; and remain stuck in limbo—or “commit,” to believe that your decisions will carry you through the next five seconds. So, man the hell up and beard the fuck on with your next moves, “Mycelia” and “ChunkySquare.”