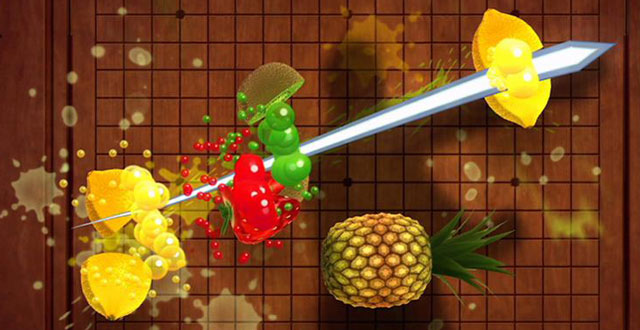 John Cleese first warned us about the dangers of fruit in the Monty Python skit “Self-Defence Against Fresh Fruit.” “When you are walking home tonight and some homicidal maniac comes after you with a bunch of loganberries, don’t come crying to me,” he barked. Despite his plea, the threat went largely ignored. Today, fresh fruit can be found in one in every three homes, and it can be purchased without a background check at most supermarkets. Would you know how to defend yourself in the event you were attacked with a concealed apple, kiwi, or banana? If not, Fruit Ninja Kinect can help.

Fruit Ninja is a motion game about karate-chopping fruit. In the Kinect update of the iOS original, you stand in front of your TV, austerely posed, as watermelons and grapefruits are lobbed on the screen. Then, you chop them, three or four a swoosh, scoring combos, dodging bombs, and keeping fruit off the streets. For once, the red liquid splattering across your screen won’t be blood, but pomegranate juice. Coring airborne mangoes and pineapples was a simple time-waster on mobile phones, but food fights take on a higher form in the transition from touchscreens to a motion-sensing camera. They become a performance art that involves flying fists, ritualism, and most importantly, acting like a ninja.

As it turns out, different people have different approaches to chopping fruit. Some swing their arms like they are wielding katanas. Others swear by the kung-fu chop. (Hai-yas and ka-pows are frequently heard.) Some people use wide, graceful motions, like they are practicing tai chi. Some crouch—arms to the side—as if they had extinguished a candle with a throwing star. Some strike yoga poses; or Karate Kid poses; or dramatic capoeira poses. One guy resembled a reborn Neo dueling a hundred Agent Smiths. Almost everyone looks stupid.

In other words, Fruit Ninja is a great party game. It’s simple and draws a crowd. While solo play is fine for training, the fun is found in squaring off against your best buds, not only to see who can send the most fruit to the compost bin, but also who does the worst Bruce Lee impersonation, or knows the most irrelevant fact about Chuck Norris. Friends become rivals, and since you are standing directly beside them, inadvertent swipes can lead to playful shoving. Winners offer patronizing advice to the fallen, such as “Wax on, wax off” or “Be water, my friend.” Lively spectators cheer, boo, catcall, and laugh at the silliness.

That doesn’t mean shadowboxing dragon fruit is frivolous. Sometimes, conversations diverge into technique. Do you keep your forearms straight and chop at right angles, or move your wrists in curling motions like a bizarre raver dance? Do you train daily in ascetic fashion, or turn into a drunken master at night? Posturing is a clear indication of skill. The worst players stand rigidly, swatting downward. The best have established a secret life of crime-fighting because their parents were killed by fruit. Or they wash up at the local produce market, pacing back and forth beside the cantaloupes, muttering, “Ask yourself one question. Do I feel lucky? Well, do ya, punk?”