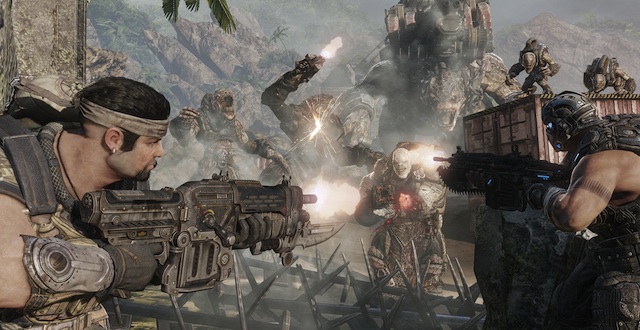 I must admit to being taken aback by the commercial for Gears of War 3. It was the “Dust to Dust” trailer, the one with the haunting guitar and ghostlike vocals of Mazzy Star’s “Into Dust” playing over the battlefield, while the heroes chisel their way through monotone ruins held by Locust forces, blasting overgrown crabs and freakish creatures with claw-like appendages. I had almost missed it. For a moment, I couldn’t comprehend what was unfolding in front of me; like the times at night when I wake, still halfway dreaming, unable to tell up from down, or left from right.

The juxtaposition was disorienting. Here is the manliest of man-games (naturally, I saw the commercial while watching football), where the only thing bigger than the guns is the slabs of beef who tote them; and the gargantuan beasts that you kill. This is a series whose defining statement is “Yeah! Wooo! Bring it on, sucka! This is my kinda shit!” Yet this dreamlike song somehow made it seem elegant, even profound.

This was one of the few times in my adult life when advertising consciously worked on me. I got the game, put it in the system, and started playing. Soon, I realized it was the same Gears; the same 13-year-old’s fantasy of being a football star and saving your dad and getting to hang out in a bunker and cuss at leisure. Sure, it’s fun, but the transcendental moment that I was promised in the commercial was absent.

As I played, the dumb-jock banter began to annoy me. I pulled up the options menu and turned it off. While I was at it, I turned down the music and dimmed the sound effects to a gentle hum. It was a long shot, but as I scrolled through my iPod, I wondered if changing the soundtrack would bring out the beauty that I had seen in the trailer. My finger stopped on Frank Sinatra.

As it turns out, smoky barroom ballads make a fine companion for flanking enemy positions.

There is a perverse irony in listening to Ol’ Blue Eyes sing his heart out while you mow down waves of mutants and rocklike men. This shouldn’t come as a surprise. Some of the most recognizable moments in cinema have combined music and images of war to dramatic effect. In Apocalypse Now, Richard Wagner’s Ride of the Valkyries piped out of the speakers of helicopters during the famous raid scene. And who could forget the chilling image of mushroom clouds sprouting to the World War II-era hit “We’ll Meet Again” in Dr. Strangelove?

As it turns out, smoky barroom ballads make a fine companion for flanking enemy positions. This isn’t because the music drowns out the dude-bro-ness of it. (Though that is a welcome side effect.) It’s because the lull of Sinatra’s rich baritone matches the methodical pacing that sets Gears apart from other shooters.

In order to appreciate the symmetry of lounge sounds and long-range mortars, I suggest skipping over Sinatra’s big band and swing-era songs. Go straight for the heartbreakers; the wonderfully sad albums he produced in the late ’50s like In the Wee Small Hours and Where Are You?. On first listen, they can seem painfully slow, but they grow on you.

The same can be said about returning to Gears for a third time, as you lumber into another civilian stronghold, or slog through the early going of the popular Horde mode. The campaign is frequently interrupted by ponderous cut scenes, but like the tempo of a downbeat love song, these episodes set the stage for the performance. The brilliance in both Sinatra’s voice and Gears’ design is in the deliberate execution. The delivery is withheld for a half-second longer than it should be––until you long for it.

Sinatra’s take on the jazz standard “Mood Indigo” is a good example. “You / Ain’t been blue / No / No / No,” he bellows. Sinatra holds his notes far longer than you would expect. “You” is stretched out until we begin to wonder exactly who he is referring to. Even a throwaway lyric like “No, no, no” feels weighty, with each denial prolonged. You hang on every word. Likewise, the skirmishes in Gears thrive on drawn-out moments that suspend you in the throes of battle.

“It’s a lonesome old town. When you’re not around. How I wish you’d come back to me.”

For instance, the guns in your arsenal take precious time to reload, and they leave you defenseless in the interim. The Longshot rifle is powerful and precise, but it only holds one bullet, and the wait for it to load is excruciating. The Lancer machine-gun sprays a line of fire at a good distance, but it has unavoidable and costly downtime. The chainsaw that is mounted on its barrel is great for sawing through assailants who draw too close. However, getting it cranked takes one bated breath longer than you’d like.

The momentary delay lends firefights a distinct rhythm. Once you have picked up on it, you’ll notice how the rhythm permeates nearly every aspect of the game. How it takes an extra round of ammunition to bring down hulking enemies. How you patiently line up your sights, waiting almost too long for a sniper to peek his head around the side of an overturned dumpster. How your health isn’t quite restored before the onrushing Horde finds you.

Even the mayhem of Beast mode is governed by this hypnotic flow. Beast mode is an inelegant yet extremely satisfying addition to Gears, turning the tables on the conflict of good versus evil. It places you in control of the monstrous foes as they rampage, and it shows that former enemies have to wait too. There is a pause before a Ticker explodes. The oafish Boomers pack a powerful punch––once every five or six seconds, which can seem like an eternity in the heat of battle. A bulky (and nearly blind) Berserker can easily decimate opposing forces, if he can find them to begin with.

Rather than just wasting time, the slowness makes you vulnerable. It creates moments of temporary weakness, in the same way that Sinatra’s long, resonate exhalations portray moments of emotional frailty. Their seductive rhythms pull you into these desperate places. After a major plot point in the Gears storyline, I was listening to Only the Lonely. “It’s a lonesome old town. When you’re not around. How I wish you’d come back to me,” Sinatra sang in a slow and melancholy manner.

We were moving through a destroyed city. Up ahead, a gnarled tree had ripped through the concrete. As a mournful horn from the song played over my speakers, we came under fire. I turned towards the muted gunfire, let off a few rounds, and strafed to safety while reloading. I targeted the shooter and killed him. Then, I rolled behind a broken pillar, took out another gunner, and moved forward. A grenade exploded in close proximity and brought me down  . I crawled across the ground, the screen colored red, and waited for what seemed like a very long time to be saved. Once in a while, the bass would strum, and Sinatra would sigh: “How … I wish … you’d come back … to … me….”