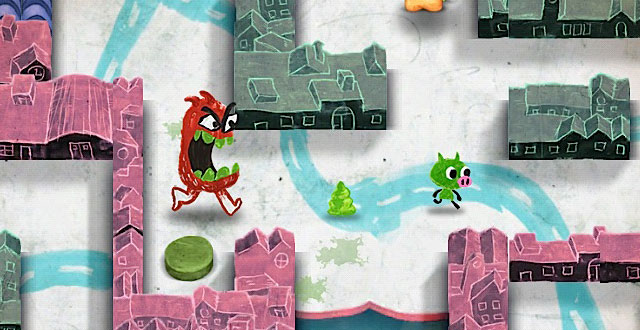 I get it. You’re a green pig in a world of reds and pinks. You look different. You keep sneezing. The others disdain you, mocking the sensitivity of your nasal phalanges. But one pig, she with the bow, offers you a tissue. You’ve made a connection in this hard, cold world with never enough slop in which to furrow. But then, of course, that connection is broken, this time by a horde of armless monsters with a taste for your phlegm. They drive your would-be companion away. In this story of isolation, you quest through puzzling worlds in order to find the cures for what ail you: acceptance, friendship, a hanky with the faint whiff of porcine love.

Touch a point on the top-down playfield and your little piggy ambles over. Touch him and pull back on the screen of your iDevice and a dotted aiming line extends, ending in a tiny x. Release, and sneeze a snot ball to the intended area. This is your power, the special ability that both ostracizes and enables you. Each world brings new abilities: Stand in flowers and your snot ball is bigger and travels farther. Stand in tall grass and the product of your sneeze shoots across the room as a grapple-hook of elastic mucus, zipping you across long distances.

But let’s dig deeper: in this game’s world, as in life, we are both pig-hero and enemy-monster. We eat and are eaten. And there’s nothing we can do about it.

A variety of monsters spatter each level: red or blue armless ogres called “Meanies,” mutant mosquitoes, blind pink bunny-blobs that respond to sound. The goal of each stage is to lead all monsters to their doom. What looks like a claw-trap is really the jaws of an underground giant fish; shoot your snot into the middle of the trap and a monster greedily runs after the luscious green dollop, whereupon the fish pops up and swallows it whole.

Playing Gesundheit!, I couldn’t help but be reminded of other puzzle games with animal protagonists. The whistle-heavy music is straight out of Yoshi’s Story, the maligned Nintendo 64 platformer. The touch-here, go-there mechanic feels like a slower version of the same control used in Chillingo’s remake of Toki Tori. Both facets cause much gnashing of teeth. Often, one will lead to the other, the frustration compounding like nesting dolls that grow uglier with each subsequent reveal.

Tapping on a screen to push a character toward a location proves too unpredictable; your pig moves of his own volition, your order a mere suggestion the shape and width of a pudgy finger. In later levels requiring timing and accuracy, any hesitation or improper move will no doubt get your pig chewed up by green-stained incisors or sucked dry by the incessantly buzzing ’squitoes. Cue the death music: a harmonizing lilt of discordant flutes. You will hear this many times. You will learn to fear the bubbly clash of its layered tones, rising from your mistake as pus rises from a festering wound.

The game’s concept and art come from illustrator Matt Hammill. Peruse his portfolio and you see he has a fondness for creatures with oblong bodies and big chompers. The chosen aesthetic for Gesundheit! matches the subject matter; these pigs and monsters, their outlines scratched in with hasty crayon swipes, might have come from a prodigious five-year-old’s sketchpad. That this game is likely to be played most by groomed men and women in their 20s and 30s begs the question: Why make a challenging puzzle game for a device that costs hundreds of dollars and choose such a prepubescent artifice? The protagonist’s weapon of choice, an evolved sort of post-nasal drip?

But let’s dig deeper: in this game’s world, as in life, we are both pig-hero and enemy-monster. We eat and are eaten. And there’s nothing we can do about it.

The game is a flowering rash, beautiful to look at but at times painful to touch.

To be sick is to miss school but go to the doctor’s. Which necessary evil do we covet less? Shall we play and risk defeat? Or not and risk ignorance?

Overall, Gesundheit! is better than a sore throat, but worse than the hiccups.