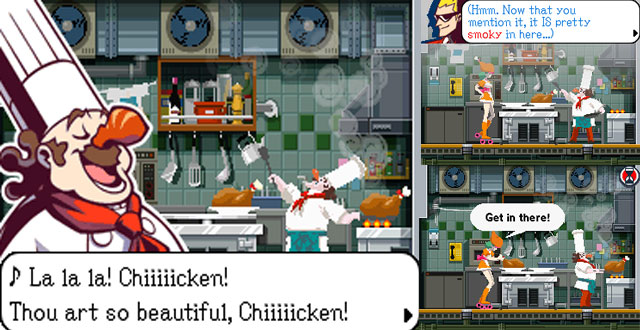 Adventure games are a genre that everybody has nostalgia for, but nobody plays. That’s because games like Ghost Trick: Phantom Detective feel old-fashioned compared to the open-world, massively multiplayer, online-all-the-time games we’re used to. Some detractors have even gone so far as to call designer Shu Takumi’s Phoenix Wright series a collection of “interactive novels” rather than games. Thank goodness he hasn’t taken his eviction from the clubhouse to heart.

Across Ghost Trick‘s dozen or so chapters, Takumi unravels a delightfully preposterous murder mystery that begins with the first victim, Sissel, waking up dead. Stricken with amnesia and possessed with the power to animate the inanimate, the spectral detective has two days to uncover his identity and catch his murderer. The game eases into its madness.

Sissel’s first task is to undo the assassination of a police detective. Among his talents is the ability to connect with a dead soul and change its fate if he can. When Sissel discovers a recently deceased soul, he can merge with it and relive the moments leading up to its death. He does this by leaping from object to object, like a poltergeist with a fetish for yard-sale leftovers. Some of the stuff can be spiritually nudged or, in the case of electrical devices, turned on by force of paranormal will.

Early on, Sissel manipulates the detritus in a junkyard to stave off the murder of would-be ally Lynne. Using his psychic puzzling powers, he flips on spotlights to flush out the killer and rings a bike’s bell to throw off the shooter just before he’s about to pull the trigger. Then he crushes the hapless goon with a wrecking ball.

These early moments are sober and grounded compared to where this mystery eventually takes us. By the time Ghost Trick lets the proverbial cat out of the bag, Sissel will uncover a fantastical conspiracy that intertwines every character. It’s hard not to remain onboard the entire time. Ghost Trick does a fine job of populating its haunted world with colorful, likable characters who are bound by uncommon friendship. And because of the game’s paranormal nature, anybody can be a part of this family—including a feisty Pomeranian called Missile. His all-caps proclamations of loyalty to his owner (always accompanied by a high-pitched barking sound) make the mutt irresistibly endearing.

Expressive animation adds a level of realism to the otherwise stylized affair. But most of the life in Ghost Trick comes from the writing. The game’s intricate plot isn’t just stitched together. It has been constructed with the utmost care—like a livelier, weirder Inception. Rather than mull the veracity of reality, Ghost Trick dwells on the ties of fate and friendship that bind people together. Where Christopher Nolan stifled his human actors with plot and flourish, Takumi manages to draw substantial humanity and pathos out of pixel and cartoon. That’s no small feat.