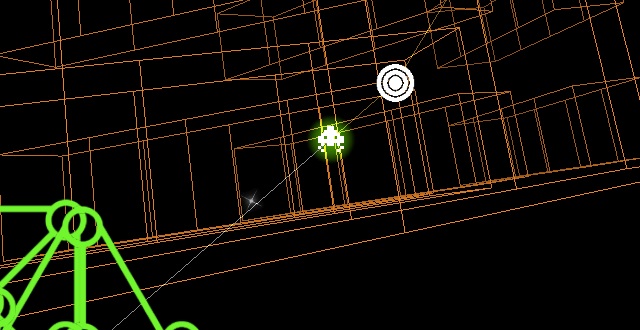 Rhythm games are sterile. That so many are content with taking something as wonderfully formless as music and turning it into a fancy spreadsheet of arrows or colored tabs is, at the least, disappointing on its face. Obviously music is more than simply a series of notes, and rarely is its magic captured in this manifestation. Indifference tends to set in quickly for me.

Groove Coaster, though: here is a game that pops with life. Each song is like a window peering into a vibrant, pulsating expression of feeling. Gameplay is confined to a single, vectored line that you follow as it travels through the galaxy; but what a line it is! It zigs and zags depending on the sharpness of sound. It pans in and out. It curves and swerves. Circular beats line the wireframe roller coaster, and they must be tapped to the rhythm of the track. Perspectives shift as the vector travels further into a psychedelic three-dimensional space, altering your perception of distance and timing. Vision can be obscured by the fusion of colors onscreen. Here, your ears and intuition are just as important as your sight and reflexes.

And as the music takes over, sometimes you unintentionally tap when there’s nothing indicating you should, aside from instinct. At this point, Groove Coaster does something else: It surprises you.

Dotting the track alongside regular beats are hidden notes you’ll often find simply by tapping along with the rhythm. These invisible ad-libs offer up extra points, but their real value is in sucking you further into the song. Perhaps accidental at first, you start to find them in bunches as you listen more carefully. Studying the angles and trajectory of the flowing vector offers hints as to where the beats may lie. They come as a surprise, initiating miniature fireworks displays where previously there was a void. They make it seem like there’s a lot more to these songs than you initially thought.

Good music isn’t something that we simply finish with. It continues to open eyes even after repeated listens. The trap is to envision perfection as solid and unchanging.

Working in concert with these hidden beats is the fact that Groove Coaster continuously mixes up which part of the song’s arrangement you’re connecting with. It moves from drums to guitars to cymbals; as your interaction is changing, the song is always building. You feel that the song is naturally unfolding because of you. Of course, this isn’t true, considering the underlying linearity of the game; but the feeling overtakes you anyway. Music is created rather than performed. The journey wouldn’t quite be the same without you.

There are misses, too. Some beats require a swipe or rub of the touchscreen, and these don’t always register correctly. Yet even when an impressively long chain of beats is broken the experience is rarely dampened. Similarly, you can level up and unlock new avatars and power-ups. Some of these offer in-game hints or decrease the score threshold required to clear a track, but they are so beside the experience as to seem unnecessary.

All these together, then: The feeling of hidden depth. The improvisation. The winding path through the stars that’s ever-present as I select a song. I can’t help but think of an old interview with Joseph Campbell, in which he referred to mythology as “the song of the universe.” If we listen carefully, he explained, rather than discovering the meaning of life, we would be led to discover possibilities. Likewise, good music isn’t something that we simply finish with. It continues to open eyes even after repeated listens. The trap is to envision perfection as solid and unchanging.

At its best, Groove Coaster doesn’t fall into that trap. What it offers is an invitation to dance. Take its hand and don’t let go.