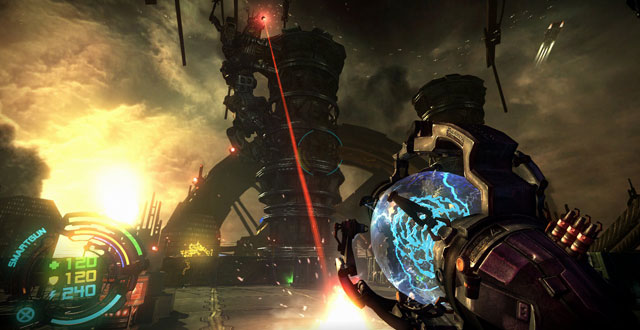 Hard Reset‘s Steam page describes the game as an “old-school” first-person shooter, which is to say it is far too nostalgic for things better left in the past. From beginning to end, I was trapped by developer Flying Wild Hog’s conviction that FPS tactics reached their high-water mark with circle-strafing and running backwards while shooting. Hard Reset may never send you hunting for the blue key, but it is nonetheless a game of constant backtracking and detouring, with waves of enemies appearing at every turn of a corner, at every press of a button.

Designs like this were headed for obsolescence from Half-Life‘s opening credits. Hard Reset offers little besides fast-paced action and dazzling visuals, but there is little wonder to it. Even within Hard Reset‘s limited ambitions as a discount twitch shooter, it is a stingy offering. It recalls the deadly sprints through Quake‘s twisting corridors, and Unreal Tournament‘s fanciful weaponry, but it never delivers the intricate map layouts and intimidating enemies that made those games so exhilarating. Its world is a beautiful, dead place: a three-dimensional matte painting meant to lend the illusion of grandeur to narrow corridors and rectangular combat arenas.

At its best, it recalls the pure delight of wading into mobs of enemies, firing improbable weapons faster than the speed of thought. And let’s be clear: Thought is very much the enemy. While Hard Reset tells a story through comic-book cut scenes, it’s entirely disposable. You play the gruff Major Fletcher, a corporate security officer for Bezoar City, a megalopolis besieged by killer robots and pushy street advertising. Along his journey, he’ll make all the requisite discoveries: his corporate employers are not as benevolent as they seem, and only he has the power to defeat the robot scourge.

Hard Reset offers little besides fast-paced action and dazzling visuals, but there is little wonder to it.

All of which is merely window dressing for a game that, from beginning to end, is about smashing robots in places that look quite a bit like something you saw in Blade Runner. It would be moodily atmospheric if only this weren’t the least frightening machine menace since The Phantom Menace. Enemies come in roughly three varieties: bowling balls with legs, refrigerators with arms and legs, and cyborgs that look like people wearing wingback chairs. They explode in showers of sparks and shiny metal parts, and the most carnage-strewn battlefield looks like a swap meet.

But the real problem here is that there’s just nothing to the combat. It’s all well and good to throw out the immersive and narrative elements that are the hallmarks of the modern shooter, but something needs to take their place. There is literally nothing to do in Hard Reset besides shoot homicidal can openers; so those can openers should be far more interesting and varied than the bullet sponges they are.

They may wear different skins, but they don’t fight differently. The big guys always charge like bulls. The little guys charge in hyperactive swarms. The cyborgs shoot from a distance. There’s never an enemy that leaves you stumped for tactics, or even firepower. Other run-and-gun games, like Painkiller and Serious Sam, keep changing up the action and throwing new enemy types and combinations at the player. When you step into a new room in Painkiller, and the door locks behind you, there is always a thrill of dread because you really don’t know what might be about to come shrieking out of the rafters. Hard Reset has no such suspense, and as result it flatlines halfway through the campaign. A few desultory boss battles arrive to enliven the action, but they are strictly “aim-for-the-flashing-spot” affairs.

These half-hearted attempts at an adversary are an unworthy match for Hard Reset‘s weaponry. Bit by bit, the player can unlock new weapons and upgrade existing ones, and results are usually impressive. Want cluster munitions for your rocket launcher? Done. EMP flechettes for your shotgun? Why not? After all, robots hate EMP weapons. I never tired of firing a stasis shell from my energy mortar, trapping a herd of robots in a choke point, and blasting them apart with a rocket.

There is literally nothing to do in Hard Reset besides shoot homicidal can openers.

And everything pales next to the smartgun, an instant-win weapon that sees and shoots through walls using a devastating fire-and-forget homing projectile. It borders on game-breaking, but that’s what makes its inclusion so inspired. It doesn’t require skill, or even thought. It’s simply a direct extension of the player’s will. You simply look at something you would like to see destroyed, and a moment later it is in pieces.

But Hard Reset does not take advantage of its own toys, just as it does not use its visuals for anything bolder than a corridor crawl. Going through my screenshots folder, I am reminded of how beautiful and overwhelming Hard Reset can be. Here a group of robots looms out of the shadows, light glinting from the pinwheeling blades they carry. Then a series of pictures washed in the strobe lights of gunfire, sparks, and arc lightning. The neon signs and distant lights of the upper city blur as my character spins and backpedals. I would like to play this game I captured on my hard drive, silent and striking. I would like to play the game I imagine it to be, the game that Hard Reset rarely is.