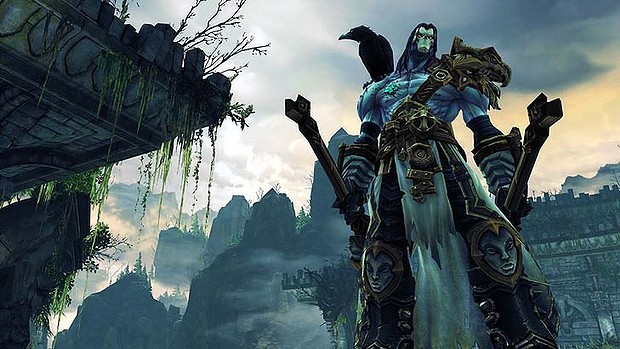 Let’s be honest. The Darksiders series, along with a lot of other action games, is basically an excuse for adults to play with action-figures. Darksiders II features a blue-skinned hero with, ahem, a dark side on an epic journey to fight evil lords and their hideous pet centipedes. I feel silly even typing that out. Yet it isn’t so different than the most mature titles. Mass Effect 3 may have a strong female lead and progressive gay romances, but aren’t you really just making your Worf and Jean-Luc figurines sleep together? (Surely, I’m not the only one who did this.)

The first thing you need to know about the main character in Darksiders II is that he looks kind of like Skeletor. He rides across the countryside on horseback, raids vacant castles in search of loinclothes with fancier straps, and carries a big axe. In case you need a crash course in Supervillianology 101, Skeletor is an evildoing action-figure from Masters of the Universe. He has a surprisingly muscular frame, considering he is a skeleton. THQ’s necromantic wannabe has hair like Glenn Danzig and muscles on top of muscles, but Skeletor is the obvious takeaway.

For starters, dude’s head is a skull. Two, he is quite at home in a Dark Age castle. And he subscribes to the super-villain dress code, which says bad guys should always wear purple. There is a resemblance, and the game’s creative director doesn’t deny it. When Kotaku quizzed him about the similarities earlier this year, he said, “I’ll take it. I like He-Man, I like Skeletor! It’s the 80’s comeback, man.”

As you can probably guess, Darksiders II is about as far away from meaningful social commentary as you can get. It simply asks you to:

This sounds a lot like how I used to play with action-figures. I had Skeletor and He-Man and Battle Cat too. I also had Masters of the Universe pajamas, bed sheets, and a sleeping bag. Does that make me biased towards Darksiders II? Probably, though I haven’t gave a shit about MOTU since I was six.

Whereas toys like Lego could lead to a career in industrial design or architecture, the best thing action-figures could get me was a job penning Star Wars expanded universe fiction, after completing a dissertation on the metaphysics of the Buffyverse. More than likely, I’d just wind up cosplaying as Shredder at Dragon*Con. Aside from convincing me that bad guys are often cooler than the good guys, and that it’s OK to spend lots of money on trivial stuff, the only thing Skeletor prepared me for in life was playing this videogame.

The only thing Skeletor prepared me for in life was playing this videogame.

Granted, playing a ton of videogames helped too. Every other review I’ve read has mentioned how Darksiders II is a mix of this franchise and that. It’s a poor man’s Portal. It’s Shadow of the Colossus meets Kingdoms of Amalur meets parkour. The Legend of Zelda comes up as well. For sure, there is plenty of thinking about which levers to pull. The puzzles are generally entertaining, but at times I feel like I might as well be assembling an office chair. I’m probably just missing Zelda’s satisfying “Do-do-do-do.” It’s depressing to think that hearing the chime made it worthwhile.

My enjoyment of Darksiders II seems to stem from this Skeletor dude. Part of me knows this is dumb. You often hear games journalists talk like they want to become their characters––you are Batman. I don’t get it. These plastic dummies have zero personality, outside of a strong affinity for good or evil. Even the most fleshed-out game characters (say, Rock Star’s Marston or Max Payne) are contemptible caricatures that stick to their opinions like a grizzled dog guarding a bone. I’d like to think we are past that.

For starters, dude’s head is a skull.

It is possible we have become dependent on living in other realities and need these vacant bodies so that we can slip into the illusion. This would explain some weird shit like otaku culture, Gwar, and the massive popularity of comic book movies, despite the fact that no one actually reads Avengers or Spiderman comics––but it sounds far-fetched to me. I don’t buy the power-fantasy angle either. If I’m supposed to feel empowered, then why does Darksiders II have so many out-of-service machines that I need to repair?

There is an easier explanation to why I like the game. It’s because, at the tap of a button, my Skeletor character turns into the grim reaper and rips through a mob of your average everyday henchmen. Superhuman abilities are just plain cool. You know, the way Batman has all of those wonderful toys, and Transformers transform into cars, or how Spawn sucked because you could never really figure out what power he was supposed to have. We admire superheroes because their powers allow them to live dangerously, unlike us. The Oddyssey would have been pretty boring if Odysseus flew coach and took a nap on the way home from Troy.

It just so happens that our would-be Skeletor can pull off some badass moves. He can summon the radioactive skeleton of a horse between his legs, and gallop off to slice his foes with a sickle, like playing an especially apocalyptic version of lacrosse. He can grab enemies with a purple stream of electricity and do an incorporeal pile driver. And he opens doors with emphasis using a pair of disembodied hands. Okay, so the ghost hands aren’t that impressive––but it’s probably what I was making my Skeletor action-figure do twenty-five years ago.

It may seem unhealthy for an adult to be fascinated with imaginary powers, but it’s better than the cynicism that comes with taking playthings too seriously. I’m happy with my character that looks like Skeletor. To say anything else would be over-thinking it, like the two guys from Clerks debating the ethics of the Death Star being destroyed. I realize that people think games are important and worthy of Oscars and so forth. I’m with you. But sometimes it’s nice to play a game that has ghost hands.