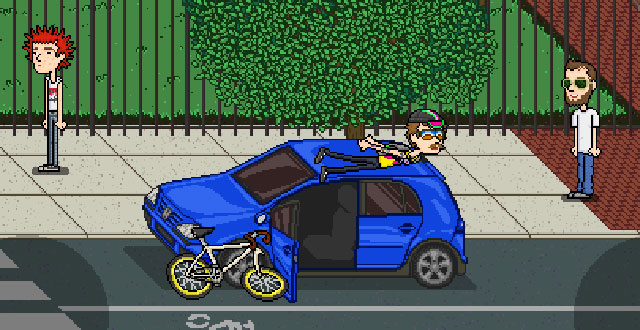 I’ve never ridden on a fixie before. I’ve heard that there’s nothing else quite like it. I’m not simply talking about it as a hipster status symbol. There’s a deeper appeal: it operates on the simple principle that you get back as much as you put in. There is no coasting with a fixed-speed bike, only motion. Hipster City Cycle taps into this idea of constant motion and energy.

The game stars Binky, who is just starting his rise to bohemian bike-god status in the mean streets of Philadelphia. The problem? He has a good job, lives in a decent neighborhood, and has a sizable trust fund. To get rid of all shreds of his middle-class bourgeois existence he must run races, throw elaborate parties (with their own Facebook invite pages with, of course, a few fans “maybe attending”), and buy new bike parts. Lose enough money, and he can unlock a crappier (see: “more real”) part of town to live in.

Most of the charm of Hipster City Cycle comes from the presentation: the way it apes an 8-bit retro aesthetic to sketch out South Philly; the light, catchy chiptunes by Animal Style; the loading screen with pixel-art hipsters extolling their varied views; the various jobs Binky takes while he climbs down the social ladder. The game’s tongue is firmly in its cheek.

It’s an infectious sort of fun, but it isn’t just smoke and mirrors. Port 127 has designed not only a good game, but a robust game. Riding through the city in an isometric view, you try to get a high score by finishing a race quickly and with style. Your style can be cosmetic (having a bike with a high “cool” stat increases your score multiplier), but pulling off moves like track stands and skirting other vehicles also increases your score multiplier.

You steer through the city by tilting the device and tapping the corners of the screen to pedal. The faster your tap, the faster you go. It gives the game a heartbeat that ebbs and flows with the path you take. You’ll want to swerve into traffic and run red lights. You’ll want to brush up against other cyclists and, occasionally, push them to their doom. You’ll want to grab power-ups (Starbucks lattes, tacos, or the ever-dangerous Bike Drink, to name a few).

The game’s controls aren’t always tight enough to let you respond to the dangers thrown at you. Unlike other games, Hipster City Cycle doesn’t include an alternate way to control the game. Although it embraces an old-school aesthetic and the difficulty that comes with it, losing because I wasn’t able to stop at a red light (by holding down the bottom corners of the screen), or getting hit by a parked car I saw a mile away yet was unable to avoid, makes me feel it’s the game at fault, not me.

Hipster City Cycle pulsates a manic energy. Even when braking for a red light, there’s so much going on in those lush pixel cityscapes: slow down on the sidewalks and ride by your favorite cheesesteak place. Your route might take you through the park, awash in the Crayola-box green of summer, and then to the cold grey bridge backed by an impossibly blue sky. Just as Port 127 understands the best parts of riding a fixie, it also understands the best parts of being in a city.

It’s the color, in combination with the speed, that make the game vibrate with life. If a fixie is all about constant motion, so too is Hipster City Cycle.