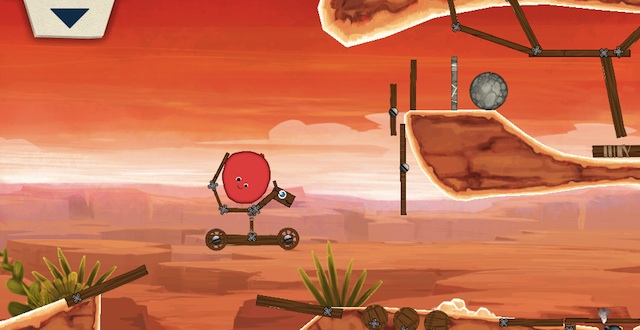 I listen to a shit ton of gangster rap music. As a white boy from a small town in the middle of nowhere, there is no greater sound to my ears than to hear Young Jeezy extol the numerous virtues of selling crack, or Waka Flocka exuberantly threaten to break bottles over people’s heads, then shoot them, and then punch them in the face. So to describe iBlast Moki 2 in a way that noted iBlast Moki enthusiast Gucci Mane might also put it, iBlast Moki 2 is nothing more than a case of “same crack, different stove.” The crack is still uniformly pointless.

Despite its acclaim among game designers/people who live and die by discovering twee shit—who laud its depth, ability to make recreating the same basic series of tasks seem novel, and general cuteness—iBlast Moki has always felt to me like less its own game than a game that’s kinda-sorta like Angry Birds. Like in the Rovio classic, you have to launch some stuff at some other stuff, and that will cause some even more stuff to happen. Unlike in Angry Birds, you have to be able to think three steps into the future in order to pull off the whole shebang. On top of all that, where Angry Birds gives you something of a perverse sense of satisfaction when you finish a level (Maybe I like Angry Birds because I can actually see Gorilla Zoe rapping about how he calls his red bullets “angry birds?” Maybe I’m just reading too deeply into Angry Birds.), iBlast Moki makes you grimly face the prospect of yet another fucking iBlast Moki level to complete.

This relationship persists in iBlast Moki 2. The gameplay, as with any good entry in the “launching stuff at other stuff” genre, is deceptively simple. You have a number of bombs, ropes and balloons, and through the strategic placement of your items and timing of their actions, you create a Rube Goldberg contraption that will lead your Moki (a lovable blob-like creature whose inability to move on its own puts its future survival as a species into question, but whose ability to wear adorable hats does not) across the level to a magic red portal that transports it to safety.

iBlast Moki makes you grimly face the prospect of yet another iBlast Moki level to complete.

iBlast Moki 2 seems to have two settings: “Laughably Easy” and “Holy Fuck How Do You Actually Expect Me To Strategically Place All This Shit So That It Launches A Glorified GIF Into A Magic Red Portal.” The tougher stretches of the game require setups so intricate and anally precise that those looking for lighter distractions might have better luck downloading a chess app, or deciphering Immortal Technique lyrics.

The dichotomy between the levels of difficulty is downright frightening. In the Red Canyon world, I encountered a level that asked me to move my little Pocahontas-looking Moki to the red portal by lifting Mokahantas using a balloon, then deploying a bomb to pop the balloon, bouncing her off a canyon and sliding her to safety. Simple. Sort of. But in the next level, I tried for four hours to make my catapult full of cowboy Mokis and Mokahantases fall into the magic red portal. I lifted boulders with balloons and glued them to hills. I timed a speed boost to deploy after 15 seconds. There were, at a point, three cacti involved. Rube Goldberg didn’t have shit on me. And yet every single time I tried to launch my little Mokis and Mokettes, I’d send a hapless citizen of Moki World plunging into the very cheery abyss.

I felt like a crack fiend, coming back for more, even though I knew the game was rotting out my teeth and making me uncomfortably skinny and shake when I didn’t rescue those damn Mokis. I needed a fix, even if the solution to my problem just led to yet another problem. I finally had to bite the bullet and cash in one of my hard-earned Moki Coins and buy a solution to the level. To my utmost shame, I spent actual, real-life money on my Moki Coins. I was literally paying for my own impatience. Turns out all I had to do all along was throw some glue on the catapult, and then let it swing into the magic portal, and bounce the one Moki who didn’t make it in on the first run off the side of a hill. Paydirt. iBlast Moki is so stupid.

Ultimately, it is for this reason that iBlast Moki 2 can offer such simultaneous agony and ecstasy. It shouldn’t be so hard to send a little Moki to safety, but, just like it shouldn’t be so hard to serve fiends on the corner without getting your shit rocked, it is. And when it finally does happen, and that little Moki goes into that magic red portal, you feel pride well up inside of you unlike anything you’ve ever felt. You’re happy. But it’s ultimately hollow. The fiends have been served, but now what? Well, you serve them again. And again. Same old crack, different stove. The stove just keeps getting more complicated and pointless ever time. In the end, iBlast Moki 2 is a trap, and Gucci Mane isn’t even there.