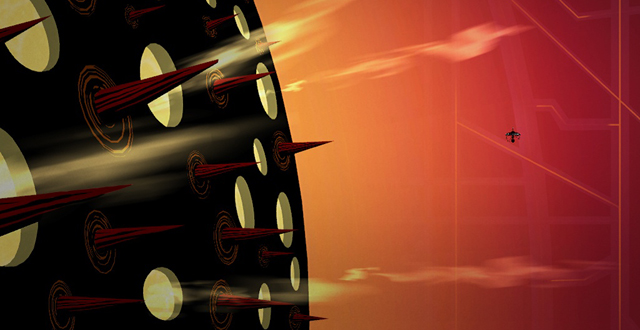 The world of Insanely Twisted Shadow Planet is populated by beasts, plants, and machines that were left to do a job. There are no allies, and no arch-enemies. There is no living being with an interest in your survival or death. Machines hum and gears turn, fulfilling roles that seem to have been set in motion long before your arrival. You’re only in danger when you get in the way.

It’s a weirdly oppressive experience, having the freedom to go anywhere you like, but being unable to get there because locked doors, caved-in passageways, and excessively large drills burrowing into the earth all stand in your way. But it’s worth exploring: solutions to these problems wait for you in the most unlikely places. In the beginning, the only tools for your flying saucer are a claw that can grab things, a scanner that clues you in on what to do, and an incredibly impotent gun that can only shoot very small things. But you’ll find yourself stumbling onto a host of new tools, from a spinning saw blade to a tractor beam, that introduce new angles on exploration. The game leaves you free to experiment, guessing and chronically failing. Checkpoints are always close by, and starting over is easy. Even backtracking becomes a pleasure as you begin to master the controls, dashing up and over crevices and cliffs, around unassuming creatures.

This act of exploration presents a host of opportunities for danger, and the impetus is on players to find their way. While another recent Metroid-style game, Shadow Complex, might provide guiding markers like bright blue lines and an exhaustively labeled map, Insanely Twisted Shadow Planet leaves that map empty. Finding yourself “stuck” results in a feeling of being lost. The world is dedicated to ignoring you, refusing to hold your hand, because it wants you to make the journey alone.

As you navigate the vast world map, you scour each zone for a crucial upgrade to move on to previously inaccessible areas. These upgrades can only be acquired after a climactic boss battle, which arises without much fanfare or preparation. The giant monsters unveil themselves as if awoken from a long slumber. The fight is often prolonged and tense, but it also feels muted and sedate in nature: no one cheers, no music swells, and it’s unclear whether the monster was doing anything wrong in the first place. They aren’t evil henchmen as much as they are loyal guard dogs, protecting their domain and their master. But it’s not about them; it’s about proving to ourselves that we can finish Insanely Twisted Shadow Planet without any help or acknowledgement.

I played the game in an empty house with the curtains pulled shut, the room dark and quiet except for the muted, atmospheric sound effects. My metallic avatar glided smoothly through caves and crevices. I found upgrades and put new abilities to use. I learned to use old abilities in new ways. I improved in skill. This may sound like a cold, detached experience. But these are the things that make the inevitable reward and revelation so enlightening, even when you’ve no idea where you are or where you’re going. Eventually, you stumble on a sense of what we’re capable of by yourself. In a time when many games are still designed as escapist power fantasies, it’s a brave and refreshing choice to leave the player abandoned, alone, and without a built-in walkthrough.