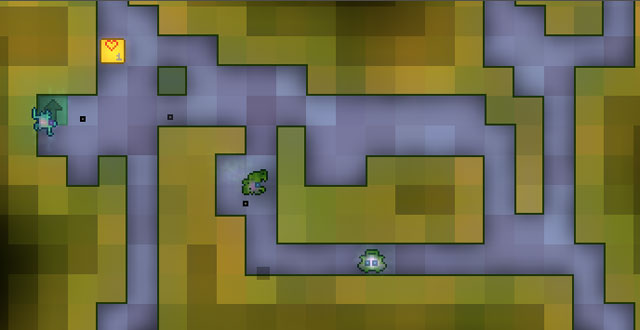 Remember the ending of the first Men in Black film? After Will Smith and Tommy Lee Jones save a marble-sized galaxy from falling into the hands of a giant cockroach, the camera zooms out to reveal that the Milky Way is itself the size of a marble—likely inside an even bigger marble, which is inside an even bigger marble, and so on. This is the experience captured by Jason Rohrer’s Inside a Star-filled Sky.

While Rohrer’s best-known game, Passage, was interested in the limits of life, Star-filled Sky is preoccupied with the infinite—which is pretty ambitious for a game that plays like a sloppy 2D shooter.

You’re a randomly generated creature fighting other randomly generated creatures, moving through a randomly generated level. You run around this abstract setting, shooting bullets and collecting power-ups. When your character reaches an arrow, the screen zooms out to reveal that you were merely a creature inside of a much larger creature. (You can even shift-click to go inside an enemy.) It’s a bit like the cell stage of Spore, where you play as a microbe in a tide pool, trying to eat other microbes. Except in Star-filled Sky, you keep doing this forever.*

The power-ups are interesting: They affect your creature’s abilities in the next level; so if you’re struggling to get through a corridor, you can go back and grab the power-up that lets you shoot around corners. (And that’s just one example—apparently there are 165,000 ways to combine power-ups.) This also means you’ll backtrack frequently; and honestly, the shooting itself is more tedious than it is exciting—shoot, dodge, maybe shift-click an enemy, and repeat. When you die, you’re sent back a level, which quickly grows tiresome when you get stuck bouncing back and forth between two difficult levels.

Rohrer says you’ve surpassed the scale of the known universe by the fourteenth level. And you can keep exploring the infinite universe—which is kind of romantic, but also starts to make one feel helpless and insignificant. Also, frustrated. After fifteen minutes, the scale of Star-filled Sky starts to feel like a burden, which brought to mind the deliberately unplayable Tetris HD. I couldn’t bring myself to continue past level 22. It’s possible that Jason Rohrer is moving away from allegorical games and focusing more on gameplay mechanics, but I have more confidence in Rohrer than to believe that Star-filled Sky is about clicking on enemies.

I opened Passage and played it for what was probably the twelfth time. It became even clearer that the two games are opposites. Passage is an interactive metaphor, a deeply moving piece of 8-bit impressionism that explores the constraints of mortality. In Star-filled Sky, Rohrer gives us something much harder to grasp—an entire universe that’s clever but ultimately meaningless.