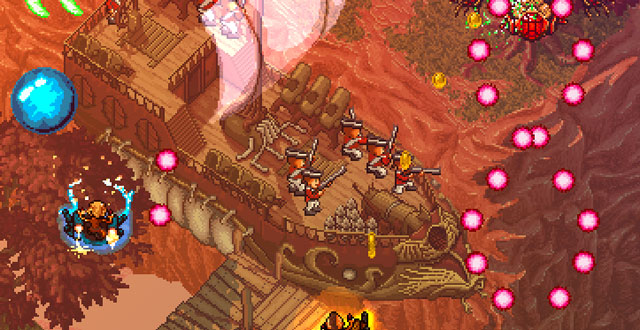 The hardest difficulty in steampunk vertical shooter Jamestown is called “Judgement” for a reason. The shmup, channelling the spirit of bullet-hell spirit-killers like DoDonPachi and Perfect Cherry Blossom, is a game about redemption—and this is no clearer than in its co-op.

The PC game, available via Steam, supports up to four players (and happens to feature one of the most user-friendly and navigable menu schemes I have ever encountered). But my experiences with Jamestown were more intimate: I had only one partner to prove my worth to.

Jamestown heavily fictionalizes the 17th-century imprisonment and explorations of Sir Walter Raleigh at Jamestown, Va., primarily by loading it with gun-laden spaceships and placing the settlement on Mars. The game knows how farfetched its own premise is, offering a Farce mode available for 50,000 hard-earned ducats (the in-game currency). Regardless, the story of Raleigh, or Wally if you prefer the farce, maintains its theme of vindication in its wonderfully ball-busting gameplay.

The story of Jamestown introduces a distraught Raleigh, escaped from imprisonment and looking to clear his name before his king. He seeks redemption on Mars, only to find that the Spanish have allied with the native Martians and are hell-bent on destroying the English settlement. When my partner and I begin, I find the story, narrated by Raleigh through journal entries, creative and cute, but somewhat hammy. But the absurdity of the narrative is mitigated by thematically evocative game stages, which make strong cooperative play both necessary and exhilarating.

The theme is embedded in the game’s mechanics: Jamestown provides room for improvement, but this in turn eliminates any excuse not to perform. Progressing through the five main stages eventually drops out the easier difficulty levels, so that reaching the final stage means having to play on Legendary, the third of five tiers. The game is, meanwhile, goading us to play on Divine or—shudder—Judgement. Completing all stages (including purchasable Bonus stages) leaves players with the Gauntlet, a non-stop, back-to-back run-through of all main stages that provides only three credits. While this could very easily have become a grind, our impetus to see everything in Jamestown kept it from drudgery; besides, any grind was our own fault.

When we play together, the goal is not to be dead weight: to have a stray bullet hit our tiny hitboxes is anathema.

When my partner and I play, we learn to occupy halves of each map. I become comfortable with the Gunner (which contains a weaker stationary gun and a stronger moveable gun) and my partner settles in with the Beam (something of a cross between the Red Powerup: Vulcan and Blue Powerup: Laser from Raiden IV). A stunning top-down view disguises an enemy housing unit as benign environment—until a million little spaceships escape and mines blossom into a rhododendron of bullets.

When my partner dies, I must survive for a number of seconds, and vice-versa. This can be harrowing: it becomes the responsibility of the survivor to dodge and vaunt (a quickly-fading shield and point multiplier), to find a Revive power-up (the death of both players results in a loss of credits and ultimately a failed stage), to keep up their end. When we play together, the goal is not to be dead weight: to have a stray bullet hit our tiny hitboxes is anathema. We designate areas of the screen to clear for the sake of each others’ safety. We switch sides only when necessary. We argue and make excuses constantly. Motivation is born of a strange mix of repairing bruised egos and the need to push forward: for ourselves, for the game, for each other.

The single-player is nothing to sneeze at, either. But something is certainly missing: if I lose, I simply restart. I don’t have to keep up with anyone, survive for anyone, or save anyone. On a more practical level, stages like Croatoa, which is designed like a maze, demand at least two players to be able to adequately cover the entire screen. As a lone player, I limit myself to about a quarter of the stage. If one is trying to earn funds, for instance, one would do well to find a friend.

Jamestown reproduces the sensation provided by its genre relatives: the seemingly impenetrable flurry of bullets requires a certain entrancement in order to be managed. It promises both chaos and hypnotizing calmness. But Jamestown takes those pure feelings one step further. There’s a mutual, unspoken understanding which, when achieved by all players, produces the most successful outcome. When all players have learned to appreciate the relative strengths of their guns, claim their sections of the map, and coordinate their dodges, vaunts and revives, the feelings of pride and vindication are overwhelming.

My partner and I rarely achieved this state of Nirvana. But when we did, it was as though all of our Start Overs and Game Overs were finally justified. When we led Raleigh to victory, he didn’t return to his king. He remained on Mars hoping to rebuild. He felt satisfied, but energized and ready for new adventures. We, on the other hand, needed to take a nap.