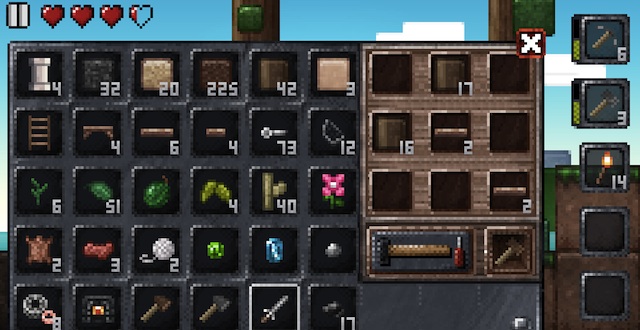 Junk Jack is a lot like Minecraft, only cuter. Your little miner avatar has a cigarette permanently dangling from his mouth—but other than that, the game sticks to the formula. Players collect items, “craft” them into other items, and use them to build things. Yet even beyond mining and building, Junk Jack is about organization. The game encourages a systematic approach. I found myself arranging the items in my inventory in an orderly fashion. And when I ran out of space in my inventory, I put them in storage chests according to what type of item they were. As I planned my house, I built the rooms based on what I wanted to put in them. I had a room for displaying my jewels, a work area for crafting, and a living quarters with furniture in it.

Even toiling in the mines, I noticed how I unintentionally dug in a pattern: down, left, left, down, left, left, place a torch, and rinse and repeat until I ran out of torches. It seemed natural to extend these patterns into my review. The best approach would be an ontological one. I decided to list the game’s objects in order from greatest to least, starting with buildings and tracing their origins through chairs and pickaxes and blocks of wood—down to a single pixel.

Buildings
Aristotle claimed that all things go toward their natural place. In Junk Jack, they eventually find their way into whatever you are building. Whether it is an apple that gives you one heart of health so you can dig a wee bit further, or ore mined far below the surface, every single object contributes to the end goal of building a sprawling country estate, elven village, or imposing statue of Mario.

Precious objects
Junk Jack trades on the idea that the most prized objects are the least useful. Rare, collectible objects are highly desirable, but they serve no practical purpose, other than decorating empty spaces. Unlike lesser objects they cannot be used to craft other objects; nor can they be crafted, like greater objects. And they are only found deep in the earth. They range from Game Boys to Egyptian funeral masks to Monets.

Greater objects
Greater objects are crafted from lesser objects—usually at a crafting station. They include furniture, building materials, and decor. They retain a degree of functionality: A chest holds objects. Brick forms walls. A door leads into a house. Chandeliers light the den. Glass jars are set on top of tables and shelves.

Elements
These are naturally occurring objects that the lesser objects originate from. Most are squares that measure one centimeter long, and are found in various shades of gray and brown. Others include tree trunks and vegetation, ruminants, crates, vases, and treasure chests.

World
The squares are stacked side by side with occasional gaps, seeming to recede forever below the surface. They form a jagged border at the surface, where sheep bleat and pigs hop across the grass. There are shrubs and trees growing upward. A mountain range lies in the distance. As the day turns to night, the sky changes from light blue to a pinkish-peach. The stars become visible, and the sky takes on a deep cobalt blue.

Atoms
The world is composed of tiny particles that are too small to count. The particles are the same size and shape, and are evenly spaced. They seem to encompass everything—the moon and stars, the greater and lesser objects, the base elements and buildings, even the little miner and his cigarette that never goes out.