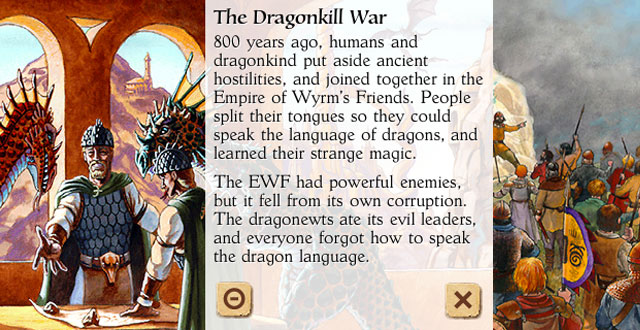 I don’t remember much from the summer my then-roommate and I found Europa Universalis II. I remember the late-night discussions of strategy and the alternate histories we were trying to impose in our world. In EU2, you can take control of just about any country or colony, starting from the year 1419, and try to last until 1820. It is difficult, almost needlessly so. Paradox is known for intricate games of strategy that don’t have learning curves so much as sheer cliffs that must be climbed with patience. It is a wargame, a game of diplomacy, a game of trade, and a crash course on how royal intermarriage made the Western world go ’round. Add a soundtrack of public-domain period music and that was a summer gone.

The issue was that, for all its complexity, EU2 was still married to real-world history. Every once in a while, prompts would come up with damned-if-you-do-damned-if-you-don’t propositions mirroring actual historical events. These events saved the game from being too dry. That is, unless, you played the Mayans and managed to last until the 1700s; or Portugal and decided to colonize North America instead of Africa (and subsequently destroy any nascent rebellion in its tracks). Eventually the game came down to number crunching instead of actually interesting decisions. The game seemed to stop reacting to us, as players. I stopped playing and my former roommate went on to EU3, which was supposed to tackle just that problem.

You are the chief of a tribe settling in a new land. Domestic policy: Don’t die. Foreign policy: Don’t let another tribe kill you.

I keep thinking of EU2 whenever I play King of Dragon Pass. King is slightly easier to muddle your way through (winning is another matter). It has a robust system that asks the player to spin many plates: war, trade, diplomacy, religion, and, kid you not, farming and immigration. Its inner workings can be just as opaque. There are also weighty decisions that are thrust upon you. The key difference is that the game takes place in a fantasy setting, divorced from any expectations or norms. You are the chief of a tribe settling in a new land. Domestic policy: Don’t die. Foreign policy: Don’t let another tribe kill you.

Little problems demand your attention every few minutes: An outsider offers to cast a ritual for you, if you pay him enough cows. A woman is accused of adultery, and it’s up to you how she’s punished (or absolved, if you feel like it). They are presented in a cheesy choose-your-own-adventure style, which doesn’t get across how important these decisions really are. Each is a double-edged sword, in the short term, but long-term consequences aren’t always easy to see. By the late game, every decision you’re making is a result of choices made hours ago, the culmination of events that seem inevitable with hindsight. That outsider’s ritual ended up fattening my food supplies on a yearly basis, allowing me to shift my farmers into soldiers, which led to more exploratory missions and raids against unfriendly neighbors. Likewise, that woman that I cast out (instead of killing or pardoning) ended up joining a rival tribe, another sore point in a decades-long conflict.

These decisions humanize what could’ve been a very dry and complex fantasy strategy game. Likewise, without the whirling gears of that complex fantasy strategy game, none of these little story bits would have any sort of weight. King’s lasting appeal is how each of these keep the momentum of the game going forward. Most games have you playing through somebody else’s idea of a fantasy novel. In King of Dragon Pass, you’re authoring it yourself.?